Saudi Autocrat Dies - A Setback For Human And Women's Rights? 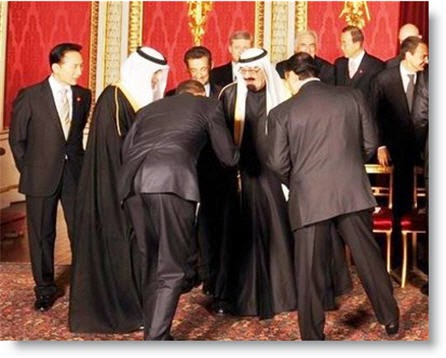 One would be forgiven for thinking that the death of Saudi Arabian absolute monarch and autocrat, King Abdullah bin Abdul Aziz al-Saud, would have been greeted with polite indifference by the leaders of the civilised world as it was by the majority of the civilised people they are paid to represent.

The level of fawning and contrived condolences for the leader of a medieval desert kingdom was revealing considering that the Saudi people themselves didn't appear to be that bothered. There is no shortage of autocrats-in-waiting ready and willing to take over the Kingdom and continue the head chopping, limb amputating, women stoning, human rights denying dictatorship with which we have become all too familiar.

Most pundits cite oil and the politics of oil for this grovelling subservience but America and Great Britain import approximately fifteen percent and four percent per annum respectively.

Competition for inward investment is cited as another reason. Since Saudi Arabia comprises mainly of hostile desert there's not a lot of investment opportunities for their vast oil revenues, therefore large parts of the civilised world, including up market areas London and New York, is home to Saudi oil money in the form of prime real estate holdings along with other valuable assets.

Arms sales and other military hardware are up there as an excuse but to what purpose when the last big middle east wars needed American and British led coalitions to save their bacon ass*s.

The odious behavior and vulgar profligacy of Saudi citizens in the west, along with their staggering hypocrisy, is legendary. Without a thought for the supposedly ultra-conservative version of Islam they impose at home, they indulge in activities such as drinking alcohol, whoring, rent boys, gambling, abusing domestic staff etc. while driving around in their Lamborghini's and refusing to pay their parking tickets.

Being even the remotest member of the Saudi royal family usually guarantees immunity from law breaking which would earn them one of their world renown punishments should they indulge in such activities back in their desert homeland.

Bearing in mind that fifteen of the nineteen hijackers that killed almost three thousand innocent Americans were Saudi nationals, some three hundred were allowed to leave the USA immediately after the 9/11 atrocity without investigation. This included some two dozen members of Osama bin Laden's family.

Political analysts in the west often cite geo-politics, including middle east stability, for their grovelling but this cannot be a credible reason for western leaders to abandon all they hold sacred in terms of freedom, individual liberty and more importantly human and women's rights.

These are the issues that evolved over centuries and define the difference between the civilised world and the medieval world ruled over by Saudi Arabian Kings, despotic Sheikhs and other brutal autocratic leaders who worship death like people in the west worship life.

The sight of the President of the United States of America, the supposed leader of the free world, bowing and scraping to a medieval despot should send shudders down the spine of any freedom loving civilised human being.

Likewise listening to the servile grovelling of British Prime Minister David Cameron and the demented assertion by IMF leader, Christine Lagarde, that King Abdullah was "in a discreet way a strong advocate of women".

He was such an advocate of women that he had some thirty wives including Alanoud Al Fayez who he divorced for the sin of bearing him four daughters but no sons.

According to Al Fayez, now residing in exile in London, her daughters were being abused and held prisoner by King Abdullah as they are today by the his replacement, King Salman bin Abdul Aziz al-Saud.

She has requested President Obama to intercede on her behalf to get her daughters released from bondage but judging by his actions toward Saudi royalty in the past the odds are not in her favour.

How a person with the stature and power of Christine Lagarde can make such an obviously ridiculous, and knowingly false, assertion is an indication of the deceit that the new global leadership will employ to hoodwink the people in order to impose their agenda.

British Prime Minister David Cameron is as renown for his appeasement of Islam at home as he is for making false promises in pursuit of votes.

His grovelling message on the death of the despot was nothing short of embarrassing.

"I am deeply saddened to hear of the death of the Custodian of the Two Holy Mosques, His Majesty King Abdullah bin Abn Al Aziz Al Saud".

No other leader of note outside the Arab world  has used the moniker "Custodian of the Two Holy Mosques". This is Cameron burnishing his pro-Islamic credentials in full pursuit of the Muslim vote in the up coming British general election.

He uses this title for the despot of a medieval desert Kingdom but he never extends the courtesy of using her correct title when referring to his own monarch:

Her Majesty Queen Elizabeth the Second, by the Grace of God, of the United Kingdom of Great Britain and Northern Ireland, and of her other Realms and Territories Queen, Head of the Commonwealth, Defender of the Faith.

In his recent joint press conference in Washington DC he referred to the President of the United States and alleged leader of the free world as "Barack".

It is widely accepted that Saudi Arabia aids and finances terrorist groups and insurgencies around the world together with the financing of mosque and madrassa building in the west. These are used to spread Wahhabism, their own virulent version of Islam, therefore it is more than incredulous that Cameron should continue thus:

"...he will be remembered for his commitment to peace and for strengthening understanding between faiths".

"I sincerely hope that the long and deep ties between our two Kingdoms will continue and we can continue to work together to strengthen peace and prosperity in the world".

In conclusion its worth adding that while, Christine Lagarde, David Cameron and the rest of the world leaders were ingratiating themselves with tyrants and despots. Raif Badawi was getting another nine hundred and fifty lashes for blogging and some unfortunate woman screamed her innocence as she was beheaded in the street for apparent child abuse.