Celebrities Won't Burn The Burqa - The Suffragettes Suffered In Vain

One can almost guarantee that any high profile cause, especially the more trendy, progressive causes, will inevitably attract the attention of so called celebrities. If there's a headline that can be used to burnish their 'progressive' credentials they'll be over the media like a rash before disappearing back to their mansions, their money making machines and their million dollar fortunes.

People need reminding that celebrities need publicity as much as they need oxygen because it keeps them in the public eye and the royalties rolling in. Unfortunately that's the way it works in the modern, high tech, celebrity obsessed world in which we live.

Emma Watson, Annie Lennox, Paloma Faith, Gemma Arteton all left the comfort of their usual surroundings to grace the International Women's Day march in London before forgetting about it until next year.

Sadly the reason for the original cause gets lost in the ballyhoo surrounding the involvement of celebrities and in the case of last Sunday's march it gets perverted out of all proportion.

Bearing in mind the appalling trials and tribulations of millions of women around the world, the march in London bore all the hallmarks of a publicity stunt rather than a serious attempt at ending gender based injustice and violence.

The original suffragettes were middle class activists led by the formidable mother and daughter team of Emmaline and Christabel Pankhurst. They risked their personal wellbeing with their campaigns of vandalism, arson, personal sacrifice and persistent picketing of the powerful in pursuit of their goal.

As a consequence they endured arrest and long periods of imprisonment which included force feeding due to their hunger strike protests while inside. 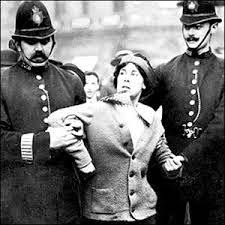 One has to mention at this point the dedication to the cause of suffragette Emily Davidson. In a final act of self sacrifice she threw herself under the Kings horse at the Epsom Derby race as it rounded the final bend dying of her wounds.(See archive newsreel here)

All this death and deprivation was in pursuit of a single issue - votes for women.

By dressing up in period costumes in order to imitate the original suffragettes, the participants, including some descendants of the Pankhurst family, not only tarnished their memory and belittled their cause, they also trivialised the event; and by inviting celebrities they took attention away from the ongoing fight for women's basic rights.

Their rhetoric was laden with the trendy politicspeak that infests public discourse these days and misses the the real issues facing women by a country mile. Income inequality would be taken more seriously if it were universally true and wasn't championed by wealthy actresses who can make millions by pretending to be someone else in front of a camera.

Reproductive rights mean what exactly to the peasant farmer scratching a living from the arid soil in Eritrea or the tribal wife in the lawless areas of Baluchistan? They are still waiting for the right to leave the mud hut without a male relative let alone reproductive rights and the vote.

Closer to home, what do these rights mean to the child bride of a close relative from rural Pakistan or the thousands of young women who's genitals have been mutilated to satisfy some barbaric alien custom.

Looking at the press releases of this auspicious occasion one would be struck by the absence of any burqa clad sisters. If these so called activists really cared about the basic women's rights they would be emulating their illustrious forebears by chaining themselves to the gates of 10 Downing Street, vandalising public buildings, constantly picketing the powerful and risking imprisonment to liberate their Muslim sisters.

Nothing symbolises the oppression of women more the awful burqa. If their excuse for non-action is that this appalling garment is a voluntary display of religious observance and piety then they are either deluding themselves or lying.

They could have risked controversy by holding a burqa burning ceremony along the lines of the bra burners of the sixties and seventies but it's unlikely a celebrity would dare court publicity that went against the perceived wisdom of the 'progressive' establishment.

There is no need for these women activists to feign compassion for women in the developing third world when there are millions of their sisters in Great Britain desperately in need of liberating.

Reproductive rights, income inequality and quotas for Parliament and the City of London boardrooms pale into insignificance compared to the grooming and rape of under age girls in Great Britain's towns and cities. The number of rape victims first thought to be in the tens of thousands has now been re-assessed to be over a million. This has been labelled as a national disaster and it doesn't merit any direct action or even a mention by the women's rights activists?

Female genital mutilation is rife in Great Britain but the authorities and the suffragettes turn a blind eye for reasons of 'cultural sensitivity'. Despite increasing instances of this barbarity against women no one has been prosecuted and not a single activist has chained herself to a gate or been imprisoned in protest.

The number of women in Great Britain who suffer appalling treatment, including domestic violence, rape, disfigurement and murder, and who are conveniently ignored by the modern suffragettes, increases with every female birth and every marriage within our imported third world community.

The accusation that the organisers and participants of these events stem from the remote metropolitan elite is borne out by the fact that they avoided any female abusing hotspots   This march would have been more meaningful, and possibly taken more seriously, if it had been held in a female abusing hotspot such as Rotherham, Rochdale, Luton or Manchester. After all there's plenty to choose from.

In conclusion it must be said that it would be stretching credulity to the limit by imagining any of the above mentioned celebrities chaining themselves to the gates of Buckingham Palace let alone throwing themselves under one of the Queen's race horses in order to liberate their Muslim sisters or to seek justice for the raped young girls of Rotherham.

If the activists that took part in Sundays march want to invoke the spirit of the original suffragettes and not insult their memory they would be taking similar direct action to end the shocking abuse of women in Great Britain and not just preening themselves in front of the media.