Cameron v Putin - The British Are Fighting The Wrong Enemy

When British Prime Minister David Cameron announced his intention to interfere in the Ukrainian civil war further antagonising Russian President Vladimir Putin, his priorities and motives are quite rightly called into question.

From now until the general election due in May, every word, action and deed by Cameron will be carefully constructed by his controllers, in tandem with their professional team of PR men, media managers, advertising executives and image consultants, to glean every possible political advantage for their man and their agenda.

Due to a litany of false promises and outright lies over the issues that concern them the most, the British public are finally waking up to the fact that their Prime Minister is nothing more than a media creation who's only skill is delivering PR choreographed public performances in pursuit of a long planned transformational agenda.

Putting some seventy three military personnel into harms way in a vicious civil war involving the Russian hard man, Putin, is not going to affect the outcome one iota, the image this nonsense is intended to create however is highly significant........if the British electorate are fool enough to fall for it that is.

One would think that with ISIS and its affiliates butchering their way across the middle east and Africa manned by thousands of British documented jihadis and with those same battle hardened killers promising to bring their murderous mission to the British mainland, Cameron should have a different set of priorities.

It must be noted that although Putin and his regime are no angels, at time of writing no Russian has bombed a bus or underground train on the London Transport System killing and maiming hundreds of innocent people; no Russian has beheaded a soldier in broad daylight on a London street.

There are no Russian paedophile gangs grooming under age British girls by the tens of thousands then subjecting them to rape and horrific sexual abuse. Russians are not mutilating the genitals of hundreds of young girls every year.

Russian fanatics are not setting up semi-autonomous no-go areas and demanding that the indigenous British people submit to their demands and no Russian gangs are wanting to see their national flag flying high over Buckingham Palace and the Prime Ministers residence at 10 Downing Street.

There are no Russian hate preachers demanding that the British people submit to Russian law.

On the contrary, Cameron welcomes Russian billionaires who appear to be buying up London real estate and businesses including football clubs and newspapers.

The intervention in the Ukrainian civil war is a carefully crafted pre-election publicity stunt designed to deflect attention away from his government's disastrous appeasement of the EU and German Chancellor Angela Merkel, in particular. It is also designed to halt the inexorable rise of the United Kingdom Independence Party (UKIP) who oppose the EU agenda.

(There is also a long term project of EU expansion into the former Soviet states, including Ukraine, but this is not Cameron's primary motive for his current behavior.)

Just to recap briefly: Cameron hails from a wealthy elite who attended Eton college, Great Britain's most exclusive private school and one of its most expensive.

After Eton he spent a gap year indulging in party politics before going up to Oxford University where he was apparently spotted as future leadership material. By who is not immediately clear but from then on his political career was managed down to the minutest detail.

After graduation, armed with the now requisite degree in Politics, Philosophy and Economics, he took the well trodden path into the incestuous world of party politics as a special advisor to some senior leaders of the day.

The ever popular, and accurate, impression of David Cameron as weak, craven and in thrall to German Chancellor, Angela Merkel, is entirely correct, therefore his controllers needed some high profile action to counter this before it sticks irrevocably.

Bearing in mind that the EU, led by Merkel, were still negotiating a possible deal with Putin over the Ukrainian civil war, the unilateral action announced by Cameron was calculated to achieve three things:

i) to give the impression that he is his own man not beholden to the EU leaders, especially Frau Merkel.

ii) to give the impression that he is unafraid to take tough decisions in order to stand up to the worlds current bogey man, Vladimir Putin.

iii) that he is has the stature required to fill the vacuum left by President Obama as leader of the free world.

The facts speak for themselves, David Cameron is indeed in thrall to Frau Merkel and the other EU leaders and he remains totally committed to the European project. This requires that Great Britain transfer what is left of its sovereignty to Brussels, becoming fully integrated into the post democratic federal superstate currently referred to as the European Union (EU) 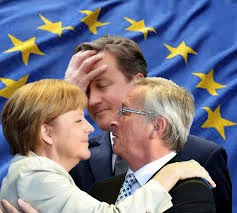 On orders of Merkel and the other EU leaders, and despite claiming otherwise, Cameron is absolutely committed to open border mass immigration in order to fundamentally transform Great Britain into a so called 'multi-cultural society' thus ending thousands of years of British history and its unique way of life.

Examples of his subservience abound but his smack down by Merkel over border control remains a classic. Who would have thought that a German Chancellor would tell a British Prime Minister that he will not be allowed to control his own borders as demanded by his own people? Weak and craven doesn't begin to describe David Cameron.

In conclusion it must be noted that with Cameron's election war chest bursting at the seams with EU and hedge fund money, and with the bought-and paid-for MSM, including the BBC, in his pocket, the British electorate can expect many more stunts like this together with an unprecedented campaign of vilification against his opponents including UKIP and its leader Nigel Farage.