Drugs, Rent Boys And Hypocrisy - Just Another Day In The Swamp 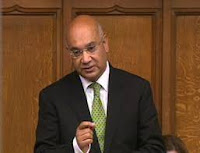 In the not too distant past the words honesty and integrity actually meant something and this vile piece of work would have resigned as soon as his sordid behavior became public knowledge but alas those days are long gone.

The sad part about this whole scandal is that despite his record of sleaze and corruption his colleagues in Parliament from both ends of the political spectrum, including the Speaker of the House, protect him as one of their own. This is regardless of the damage he has done, and continues to do, to Parliament and its fast fading reputation as a hallowed institution.

It is standard practise for sleazy, lying politicians like Vaz to portray themselves as family men/women dedicated to their spouses and children. Some even use their families as props during their election campaigns with the usual spin and puke making slogans such as 'dedicated family man', the bedrock of my life', etc.etc. ad nauseum.

In reality their wives and children are a long way down their list of priorities whereby selfish sexual indulgence and gratification, addiction to power, blind ambition, making money and their bloated egos being at the top.

Keith Vaz obviously wasn't thinking about the wife and kids as he indulged in unprotected sex with young male prostitutes and used poppers to enhance his pleasure, all within spitting distance from the family home.

Vaz is no stranger to controversy, sleaze or corruption and even to this day he refuses to disclose the source of his vast wealth, bearing in mind his day job is representing his constituents with his Parliamentary salary and allowances being his main source of income.

He was censured by Parliament for failing to register payments from a fellow lawyer and was accused by the Parliamentary standards watchdog of obstructing an inquiry into eighteen more charges.

Vaz was once described by fellow MP, Patrick Mercer as "crook of the first order" adding for good measure that "he had never met an operator like him". (See here)

With a record and reputation so awful one would think that his colleagues in Parliament would keep their distance lest they get tarnished by association but one would be very wrong. They made him Chairman of the powerful and influential Home Affairs Select Committee and he held it until the recent scandal became public.

As an indication of how the modern political class protect each other, the leader of the Labour Party, the far-Left socialist, Jeremy Corbyn, claims that Vaz's sordid behavior is purely a 'personal matter' implying his continued fitness for service.

If deceiving his wife, his children, his constituents and the country at large in such an appalling manner does not invite opprobrium and censure then I don't know what will. Supplying Class A drugs should invite a visit from the police but he'll most likely get away with that also.

As is normal in these situations his wife will be standing by her man even though his extra curricular activities could have infected her with a variety of sexually transmitted diseases including Aids. As a matter of fact she appeared with him in front of the world's press as they attempted to brush off the scandal with a stage managed business-as-usual performance after the scandal was exposed.

In conclusion, what Keith Vaz does in his personal life is own business but deceiving Parliament and the public at large that he is a dedicated family is not, neither is offering to supply Class A drugs to young men to entice them into depravity.

Since Keith Vaz is not the type of person to do the honourable thing and resign, his party and Parliament should do the job for him to preserve any remaining dignity they may have left.

Parliament should censor him and his Party should withdraw the Whip; all support should also be withdrawn and his constituency party should deselect him forthwith.