It has become a custom in the civilized world for the various leaders to send fawning greetings to their respective Muslim communities to mark one festival or another. These greetings include undeserved, sentimental flattery about their contribution to society and paint a picture of peaceful tolerance and co-existence that is at odds reality.

Unelected British Prime Minister, Theresa May, used the occasion of Eid al Adha to give one such reality defying address, the content of which was so sickly and the delivery so cringe worthy it's painful to watch. (See it here)

Due to the culture of imposed political correctness and intimidation the British people keep their council and do not voice their opinions on Islamification overtly. Covertly it is blatantly obvious that the Prime Minister does not speak for the majority of the British people nor do they share her sentiments.

Since the American, Canadian and Australian people are suffering the same destructive and bloody consequences of the Muslim global agenda, President Obama, Prime Minister Trudeau and Prime Minister Turnbull are not speaking for their respective peoples either when they gave their fawning Eid greetings. (See here, here and here)

The truth is that the majority of Muslims hate the western democracies along with their cultures, practices and ways of life, preferring instead to live under barbaric sharia law.

Muslims believe the contents of the Koran and follow the same prophet, Mohammad, so it stands to reason that those that kill in the name of Allah in order to dominate the world are the true followers of Islam while those so called 'moderate Muslims' are committing heresy by not following suit.

The questions that the British people would like addressed by the Muslim community, and Mrs. May, are these; if you hate their culture, practices and their way of life why do you choose Great Britain to migrate into? To those who are born in Great Britain but hate the culture and reject the way of life why do you stay and not emigrate to a country that shares your religion, your culture and tolerate your practices? The same questions apply to America, Canada and Australia.

When all things are considered, Islam and Muslims are not compatible with Great Britain's culture, customs or way of life. The following are just a small sample of the reasons why.

The Muslim community are offended by the fact that the British people eat pork and pork products. Sausages, bacon, black pudding etc. is the traditional British breakfast but Muslims are refusing to handle these products even if it's in their job description to do so because they are supposedly unclean.

A full English breakfast is even more delicious after an evening down the pub where the British people partake of that other ancient custom of drinking a skinful of beer or other alcoholic concoctions.

It's more than just a traditional form of recreation, the British pub is woven into the very fabric of every village, town and city. Those places where the local population have not been displaced that is. Muslims have put booze in the same category as pork and are refusing to handle that also.

British women are liberated and free to make their own choices on every aspect of their lives, this includes choosing the bikini as their preferred attire when visiting the beach. This may not be acceptable to Muslims but it is most definitely not an invitation to sexual assault or rape.

The way that Muslim men treat their women is grossly offensive to the British people but that reality doesn't influence Mrs. May or the political class who label such opinions as 'racist' and 'Islamophobic' They excuse the appalling misogyny that is inherent in Islam by claiming that it's 'cultural enrichment'.

The British people are known as a nation of dog lovers who refer to these lovable creatures as 'man's best friend'. This is in stark contrast to the cruelty they suffer at the hands of cold hearted Muslim dog haters who obviously derive great pleasure from their torture. 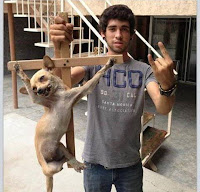 In addition to all of this, British parents do not marry off their pre-pubescent daughters to adult relatives such as uncles or cousins. They do not indulge in paedophilia, female genital mutilation, honour killings or public self flagellation in the name of their God.

They do not behead people who do not share their belief systems or seek to subjugate the entire planet under the cruel, uncivilized sharia law.

In conclusion, it's worth stating that Mrs. May is an Islam reality denier who is on record as saying that many Britons would benefit 'greatly' from barbaric sharia law. She is also want to repeat the favourite soundbites of the global political elite such as "Islam is a great global religion of peace" and in tandem with the other western leaders she excuses the bloodshed and barbarity by repeating ad nauseum that "it's nothing to do with Islam" after every Muslim atrocity. (See here)

The fact that Mrs. May made her insensitive and offensive Eid address on the fifteenth anniversary of the September 11th attack on the World Trade Centre, New York, where Muslims murdered almost three thousand innocent Americans in the name of Allah  proves beyond doubt that she is as committed to the Islamification of the western world as Obama, Trudeau and Turnbull as instructed by their UN masters.

Posted by Daniel Thomas at 2:52 PM