FDR And Truman Worked With Stalin To Destroy A Common Enemy

If people thought the BBC-led mainstream media in Great Britain was biased then they need to take a look at its American counterpart. The Ministry of Disinformation and Propaganda would be a perfect title that would sum up the organizations that not only peddle lies and falsehoods for political ends but also ignores the history of their own country.

The attempts to portray Presidential candidate, Donald Trump, as a danger to peace for suggesting an alliance with Russian President, Vladimir Putin, to defeat ISIS is not only puerile but it's insulting the intelligence of informed people across the planet who read this nonsense.

There's nothing new about an American President working with a Russian strongman to defeat a common enemy. Presidents Roosevelt and Truman both worked in an alliance with the communist tyrant Josef Stalin to defeat Nazi Germany.

Before falling for the campaign to smear and ridicule Donald Trump it would be wise to note that President Putin is a venerable saint compared to Stalin who was one of history's biggest mass murderers and who also went on to enslave huge swathes of Europe under his brutal communist yoke for two generations.

It must also be borne in mind that Germany posed no direct territorial threat to the United States unlike ISIS who are using their Islamic State in Iraq and Syria to train, finance and radicalize Muslims to attack and kill Americans on their home soil. 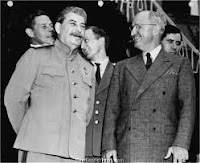 As the mainstream media are using a possible Trump-Putin alliance to ridicule and smear his candidacy, it would be interesting to know if his opponent, Hillary Clinton, considers Presidents Roosevelt and Truman's alliance with Stalin to defeat Nazi Germany were dangers to peace and to American interests abroad during World War II.

While we are on the subject of great historical events it would also be interesting to know if she agrees with President Truman's decision to use atomic weapons to defeat the Japanese, but I digress.

What is obvious is that American foreign policy under President Obama has been an unmitigated disaster which has left the middle east in ruins and facilitated the rise of ISIS which in turn has caused the spread of radical Islam to all corners of the planet.

The choice the American electorate face is one of the status quo which will allow ISIS and radical Islam to entrench itself in the middle east and Africa and continue to spread to the American mainland itself or Mr. Trump's alternative.

In conclusion a word of caution: If Mr. Trump does win and joins with President Putin to defeat ISIS he should take note that although the 4th century BC proverb, " the enemy of my enemy is my friend" still holds true today as it has for over two thousand years, it was tempered by Great Britain's wartime Prime Minister, Winston Churchill, when he added that when supping with the devil be sure to use a long spoon.

Posted by Daniel Thomas at 6:38 AM