The Architect Of The EU Immigration Disaster Kicks The Bucket 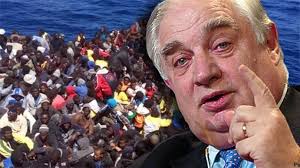 There was much weeping and wailing in the gilded halls of the global elite recently as they mourned the mortal coil shuffling of Peter Sutherland, one of their most senior and revered members.

Known as the father of globalism, the term ‘faceless bureaucrat’ doesn’t begin to describe this fanatic who is the man largely responsible for the economic and cultural destruction of EU basket cases such as Greece, Sweden and Italy along with his native Ireland.

The cultural and demographic disaster engulfing Europe from Scandinavia to the Mediterranean Sea and from the Atlantic Ocean to the Balkans is the result of this globalists’ total commitment to destroying the ancient cultures of Europe using mass immigration and replacing them with so-called multi-cultural societies.

He always used the term ‘destroying national homogeneity’ when referring to this cultural replacement agenda which is a politically correct term for what can only be described as ethnic cleansing.

The achievements of this monster of which he was most proud include the descent of Sweden into third world mediocrity and the rape capital of the world. Likewise his native Ireland, areas of which resemble Lagos or Mogadishu instead of the Emerald Isle we know and love.

The mass sexual assaults and mass murder of innocents by Muslim jihadists which is rampant in Europe, including the more advanced countries such as France, Germany and Great Britain, are the result of Peter Sutherland’s fanatical dedication to imposing multi-culturalism using mass immigration from the backward, uncivilised world.

The malign power and influence of the global elite is highlighted by the fact that Peter Sutherland held enormous power over the Presidents and Prime Ministers of Europe; the policies he advocated destroyed entire countries and the lives of hundreds of millions of people and yet he was never elected to anything via the ballot box in his entire life.

Such was his remoteness from the real world, his soulless carcass will be sent on its way unmourned by the ordinary people of Europe who’s lives and countries have been destroyed by the malignant ideology of this evil globalist fanatic and his ilk.

In line with the standard practice of the global elite, the word ‘appointed’ dominated the curriculum vitae of this powerful yet unaccountable bureaucrat.

His career as an international 'political fixer' was stellar and began when he was ‘appointed’ Attorney General of Ireland. A committed believer in replacing the independent nation states of Europe with a single, borderless, superstate he was then ‘appointed’ as a European Commissioner in the corrupt EU Commission of Jacques Delores.

European Commissioner is a powerful position which serves as a conduit for multi-national enterprises, big banks, international corporations and the UN to control the phony European Parliament and implement policies that imposes the new world order they have planned.

Other ‘appointments’ in the international banking, industrial and education sectors followed thick and fast for Sutherland including:

With a CV like this it was inevitable that Sutherland would be a believer and advocate of a New World Order comprising of a single, borderless, egalitarian world governed by the likes of him and his ilk.

Hence his ‘appointment’ to the Bilderberg Group, the Trilateral Commission, the United Nations Industrial Development Organization before being ‘appointed’ as the UN Special Representative for Migration.

Sutherland and the rest of the global elite are divorced from reality believing only what they want to believe while ignoring the disastrous consequences of their actions.

An example of this disconnect is his ‘appointment’ to the Global Forum on Migration and Development which promotes international dialogue on the positive link between migration and development.

The link between migration and development in Europe and the western world has been an unmitigated disaster with no resultant development whatsoever. In fact, as the whole world can see, this mass migration has had the opposite effect by reducing the host countries, both economically and culturally, into replicas of the backward third world countries the migrants left behind.

Any development or economic improvement that has been achieved is by the efforts of the indigenous population despite the degenerative influence of millions of backward economic migrants.

Despite the evidence before their eyes Sutherland and his fellow elites refuse to acknowledge this fact because it conflicts with their globalist agenda.

It must be noted that the Sutherland's’ lectures on ‘destroying national homogeneity’ and the creation of mythical ‘multi-cultural societies ‘applied only to Europe and the western world. While he toured the capitals of Europe advocating the abolition of borders and the free movement of peoples, he never delivered the same lecture in Saudi Arabia or any other Arab country in Middle East.

His lecture tour also omitted China, North and South Korea, Africa, India, Pakistan, Indonesia etc. In fact if Europeans migrated in large numbers into Africa in order to 'destroy national homogeneity' and create a multi-cultural societies they would be derided as white imperialists or exploiting colonists by the likes of Sutherland and his ilk.

In conclusion, the globalists have lost one of their founders and favorite sons but notwithstanding the efforts of President Trump and Brexit, their destructive agenda will roll relentlessly onward regardless of the damage it will do to western civilization, global prosperity, security and peace.


UN: EU must destroy homogeneity of member states through immigration

Posted by Daniel Thomas at 5:08 PM