UN Global Forum On Migration and Development- A Correction and Apology 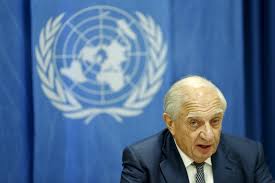 Apropos a previous article on the death of the evil monster Peter Sutherland, the father of globalism and the architect of the immigration disaster that has engulfed Europe. (See here)

Included in the article was the fact that Sutherland was delegated by the UN to lead the Global Forum on Migration and Development. A taxpayer funded talking shop supposedly formed to help nations understand the link between migration and development.

The narrative that the UN/EU is trying to create with this forum is that mass migration from the backward, undeveloped world is essential for continued growth and development in the already developed world.

My contention in the article was that this is false and that there is no link between mass migration and development. I argued that the opposite was true, the mass immigration we see today in Europe, the United States and the rest of the Judaeo-Christian world is a demographic, cultural and economic disaster for the people.

As a result of this mass migration the working and middle classes have seen their living standards decrease and their lives blighted by violent crime, rape and mass murder as their countries are turned into replicas of the third world basket cases the migrants left behind.

I offer an apology to one and all because I was not entirely correct in my assertion; history has demonstrated that there is indeed a link between mass migration and development that spread the advantages of civilization to the remotest corners of the planet.

The Americas, Africa and the Middle East were resource rich countries populated by uncivilized, violent savages barely out of the stone age until the mass migration of Europeans developed those resources creating dynamic economies and bringing all the advantages of the civilizations they left behind.

The advantages that this migration brought to the undeveloped world are denied by the UN/EU globalists and the societies that were engendered by this migration were demonized and eventually brought down. This is especially the case in Africa where those responsible for development were removed from power condemning the natives to poverty, hunger, disease and violent repression under ruthless dictators.

It is an irrefutable fact that when the civilizing influence was removed by the UN/EU globalists the native populations reverted back to their pre-migration state made worse by the availability of modern technology including weaponry.

Despite the transfer of technology and industrial capacity organized by the UN agency UNIDO along with the trillions of dollars dispensed as development aid, the third world has failed to catch up with the developed nations. ( UNIDO global transfer of wealth program here, here and here)

This leads to the obvious conclusion that the people of these backward nations do not possess the skills necessary to govern a country and run a successful economy and the indications are that they never will.

There are exceptions with India being the most visible. India embraced western civilization and made use of the educational opportunities afforded to them by the British. The educated middle class did possess the skills necessary to govern and run a successful economy and they left most of the government infrastructure and institutions intact after the British departed.

Having dispensed with the socialism and rampant corruption of the post-independence Indira Gandhi years, India is now thriving with a rapidly expanding middle class. India is now renown for expertise in the Information Technology field with its very own Silicon Valley. Inroads are being made into the high levels of poverty and the latent corruption which still blights India and it will take some time yet before both are eliminated.

One has to compare India with its neighbors and former compatriots Pakistan and Bangladesh. They chose not to embrace the civilization and institutions left behind by the British and are now wallowing in abject poverty, disease, hunger and Islamofascism.

In conclusion: I concede that there is indeed a link between migration and development but not as the UN/EU globalists would have you believe.

Regardless of the false narrative being disseminated by UN/EU propaganda, recent experience in both Europe, America and the Judaeo-Christian world has demonstrated that far from being essential for their further growth and development the mass influx of people from the undeveloped world has had the opposite effect.

As a result of the dramatic increase in demand for welfare benefits, housing, healthcare, education and a plethora of other taxpayer funded public services, economies are stagnating and living standards falling with the added disaster of national homogeneity and social cohesion being torn asunder by the influx of backward, incompatible cultures.

Posted by Daniel Thomas at 9:16 AM