Free Speech Is A Threat To Democracy – Government Censorship Is Not 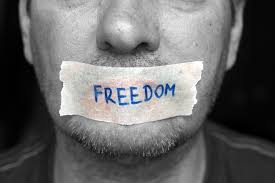 One of the more worrying instincts of the modern political class is their tendency to lapse into totalitarianism whenever their actions are opposed or even questioned by the people they are supposed to serve.

At the same time as the unelected global elite are working relentlessly to remove a democratically elected president in the United States and to overturn the democratic Brexit referendum result in Great Britain they have declared Twitter and Facebook to be the enemies of democracy.

The advent of social media has allowed billions of people around the free world to communicate with each other without their discourse first being laundered through the various government propaganda machines where unorthodox and unapproved opinions are challenged or removed.

For decades the global ruling elite have had a monopoly on the means of communication and as a result they have used insidious propaganda to impose groupthink on pre-conditioned minds. Social media led by Twitter and Facebook ended their monopoly allowing alternative opinions to challenge their imposed orthodoxy.

It is the alternative to this imposed orthodoxy that resulted in the election of a political outsider in the USA and the British people voting to liberate themselves from the corrupt, authoritarian European Union.

The reaction of the global elite was not to accept the will of people but to clamp down on their ability to exchange opinions freely which they regard as one of the the root causes of their defeat. In the process they have confirmed what the people already knew, i.e. they do not believe in democracy or the freedoms that have been hard won and paid for in blood over the centuries.

These freedoms include the inalienable right to freedom of speech which in turn is one of the pillars of democracy.

Their attacks on freedom of speech have been gathering pace since the gap between what the people want and what the elite are imposing became an unbridgeable yawning chasm.

Recent actions by the leaders of the European nation states shatters once and for all the idea that they believe in democracy or that they have anything but contempt for the people they have sworn to serve.

The following headlines demonstrate their willingness to use totalitarian methods to silence and intimidate anyone who questions their globalist agenda.

Great Britain: Due to their continued membership most of the EU countries are well on their way to third world banana republic status but Great Britain? Surely not that Sceptred Isle with its history of democracy and its Mother of Parliaments?

Its sad but true, being a globalist and EU fanatic, Prime Minister Theresa May has declared Twitter and Facebook to be the enemies of democracy.

Intimidating Politicians And Campaigners To Be Criminalised By May Government.

Germany: No one should be surprised that a mentally unstable communist party apparatchik from the former East Germany would be a totalitarian.

Sweden: Europe’s most high profile basket case who will be added to the UN’s list of third word countries by 2030.

Sweden Passes A Law To Criminalise Any Criticism Of Immigration

France: It didn’t take the new boy-king to long to start using his authority against democracy and the French people.

And so it goes on; from Italy and Greece to Ireland and the Netherlands, censorship is the order of the day because the ruling elite refuse to respect and implement the will of the people.

As democracy is undermined, the people of Europe have no way to redress their grievances and as their countries and cultures are willfully destroyed their only recourse will be civil disorder and violence.