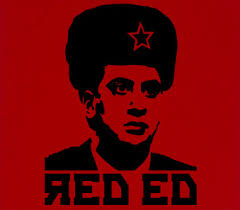 If we are honest with ourselves we, the people of Wales, have no control over our own destiny. We are powerless. By continuing to re-elect the same servile Labour politicians over and over again, we have disenfranchised ourselves. We are predictable and therefore we are taken for granted.

The Welsh Assembly can be discounted, it's nothing more than a toothless quango. An expensive talking shop whose only purpose appears to be the distribution of other peoples money and lining the pockets of its Members.

Wales, predictably, has invested all its political capital in a wealthy North London Labour career politician.

Welsh political power is divided between:

Plaid Cymru who are hanging on in there but are ineffectual outside their specific locations.

The Lib Deb power can be discounted and considered a wasted vote. Their day has been and gone. They should join that national embarrassment Lembit Opik in the annals of history.

Tory power in Wales is tenuous to say the least but being part the ruling party in the Westminster coalition they do have some minor influence and like governments before them they will be judged, by me at least, by results not spin.

The awful truth is that Ed Miliband wields political power in Wales, not Carwyn Jones or any other Labour politician. They tug a forelock on bended knee to Ed Miliband, they are his poodles.

Who is Ed Miliband, the other Prince of Wales? A look at his various biographies is very enlightening.

One cannot begin to understand Ed Miliband without reference to his father, a Marxist 'intellectual' who was a huge influence in his young life.

How Adolph, renamed Ralph, could even think about being a Marxist is beyond belief. The alter ego to Nazism, Marxism is an evil, blood soaked creed, responsible for deaths of some 100 million people worldwide.

It is said that once Karl Marx gets under the skin he takes over the brain and renders his victim incapable of rational thought.

The Miliband household was the epicentre for the North London radical socialist/communist circles and the young Milibands were involved in the proceedings from an early age. The Communist Manifesto appeared to be the guiding document of their lives.

Ralph Miliband was not just a radical communist, he was an absolute fanatic.

He recalls being in Highgate cemetery  "standing in front of Karl Marxs' grave, fists clenched swearing my own private oath that I would be faithful to the workers cause". "I thought of myself as a revolutionary socialist or communist" he continues.

Later, he goes on to say  "I don't know how faithful I was to that oath in terms of action. I am sure I could have done more, immeasurably more. But I have not from that day to this departed from the view that this was the right cause and that I belong to it".

Ralph is buried about 12 yards from his bloodsoaked idol.

Imagine the furore if a conservative 'intellectual' swore a similar oath at the grave of Mussolini. The BBC and the Guardian would be apoplectic.

In his book Socialism For A Sceptical Age, Ralph Miliband states that the construction of a socialist state is a generational journey. Moving toward the goal rather than the goal itself.

I have not seen any evidence that Ed Miliband is not a chip off the old block. He is still influenced by Marx's Communist Manifesto and believes that the wealth of the nation should be confiscated by the government and redistributed as they see fit.

He is an admitted egalitarian believing that everyone is equal, except that is, the ruling elite. Miliband himself is worth some 4 million. He could practice what he preaches and redistribute that first.

It is my belief that Ed Miliband is finishing the generational journey his father started. By his words and actions it is obvious to the astute that he is in the process of constructing that beloved socialist state.

This period out of office is a blip on the generational journey. A fourth term was unlikely so Labour left behind enough booby traps while in office to ensure that the coalition will be a single term government.

This is the man that wields political power in Wales. The Welsh Labour leaders are appointed vassals charged with keeping the Welsh people where they are in exchange for a bone off the table in the form of an annual grant.

We need new thinking in Wales together with a new direction and new leaders if we are going to save future generations from the drab, hopeless state of serfdom envisioned by Ralph and Ed Miliband.