As the repercussions from the Muslim Trojan Horse scandal rumbles on and the danger that these repercussions could have a negative effect on Prime Minister David Cameron's re-election prospects, he has resorted to what he does best, i.e. making promises he knows he won't keep.

Like the rest of the career politicians that make up the old political order, everything he says and does is concocted by spin doctors and media managers who's sole aim is gaining political advantage.

Whether a particular policy is right or wrong doesn't matter, how it plays in the media is the only consideration and this is with a view to winning votes.

For the uninitiated, the Muslim Trojan Horse scandal surfaced when school inspectors exposed a plan by Muslim activists to take over schools with intention of indoctrinating impressionable pupils with the joys of radical Islam and jihad. Some twenty eight schools had already been taken over with a significant number of pupils already brainwashed.
(Trojan horse scandals here and here)

It has been inferred that some school inspectors and government departments had an inclination that this was going on but true to form, as with the Muslim paedophile scandals, they turned a blind eye for reasons of 'cultural sensitivity'.

The long suffering British people are rightly outraged that this kind behavior is going on in their once green and pleasant land, but their outrage will be to no avail. The political class, led by the Prime Minister, David Cameron, have committed themselves to implementing a cultural and demographic replacement agenda that has been long in the planning.

The people are crippled by the same political correctness that the British institutions use to implement this agenda. The key positions in all of these institutions are manned with Common Purpose trained technocrats who in turn command armies of like minded petty bureaucrats.

These cultural Marxists run everything from the civil service, to the BBC and the NHS - more damaging is the fact that they also run the police 'service' and the education department.

David Cameron and the political class are single minded that this agenda will be fully implemented and this will require that the traditional way of life, along with British values, be replaced with a so called 'multi-cultural society'.

It can taken for granted therefore that when David Cameron appears before the bought-and-paid-for media with promises to act in defence of British values, he is merely repeating a carefully crafted response which is designed by his spin doctors to do three things:

a) sympathise with the peoples' outrage in order to pretend he shares their concerns. In other words 'he gets it'.

b) make promises that are constructed to appease the people's anger and close down the debate for rest of that particular the news cycle.

c) stem the hemorrhage of votes that these scandals generate.

This kind of shameless media manipulation is what passes for acceptable political discourse with this new generic political class, where the truth or the public good are to be avoided at all costs in order to progress the project and keep it on the rails.

David Cameron's promise to teach British values in British schools is impossible because, as mentioned previously, the entire British establishment, including the education department as been politicised and manned with like minded technocrats who are committed to the cultural replacement agenda.
(Cameron on British values here)

Examples abound of government departments ignoring British values in order to facilitate the said agenda and none more so than the different treatment meted out to a Zimbabwean cricketer and a Muslim bomber.

Duncan Fletcher was born in Salisbury, Rhodesia of parents who were born in England. It's worth noting that all four of his grandparents were also born in England. A gifted cricketer he went on become the manager of the English cricket team and guided them to their first Ashes victory over Australia in eighteen years. As a reward for his services to English cricket he was given the honour of OBE.

Again for the uninitiated, the Most Excellent Order of the British Empire is an ancient order of chivalry bestowed by the Monarch for services to Great Britain. 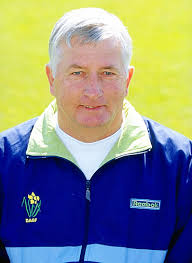 The one thing Duncan Fletcher was refused was British citizenship although he was entitled by the virtue of his parent and grandparents nationality. The Home Office claimed he hadn't met the residency requirements but ignored the fact that he was away touring with the English cricket team for six months a year.

In all Duncan Fletcher waited fifteen years before the British government were finally shamed into granting him citizenship in 2005.
(See here)

Muktar Said Ibrahim was born in Eritrea in 1978 and arrived in Great Britain aged twelve in 1990, supposedly as 'a child dependent on asylum seekers', whatever that means. He was granted residency in 1992'.

A violent criminal thug, he committed indecent assault when aged fifteen, he was involved in gang violence, and then two years later in 1996 he was sentenced to five years in prison for two armed robberies. He applied for naturalisation in 2003 and was granted a British passport in 2004. Despite his appalling criminal record, unlike Fletcher he had to wait all of one year.

Muktar Said Ibrahim rewarded the generosity of the British people by strapping on a bomb with the intention of killing and maiming innocent people while they commuted to work on the London Transport system on July 21st, 2005.

Along with his other gang members, all immigrants granted leave to remain or given British passports, he is currently serving a life sentence with a minimum set at forty years.
(See a brief biography here)

Although the news cycle has moved on, the people responsible for the different treatment of Duncan Fletcher and Muktar Ibrahim have not, in fact they have most likely increased in number and become more dedicated to their cultural replacement cause.

If the government had the interests and safety of the British people in mind, Muktar Ibrahim would have been deported after his release from prison the first time but, as the British people know to their costs, no immigrant gets deported anymore no matter how heinous their crime. The cultural replacement project takes priority over the people's safety every time.

If David Cameron is serious about restoring British values then it is imperative that instead of making promises, he clears the civil service, along with all the politicised government departments, of the indoctrinated Common Purpose trained technocrats that are instrumental in destroying those same British values and way life for their mythical multi-cultural society.