Listening to the so called leaders of the free world respond to the horrors of the ISIS war against civilisation, informed people would be entitled to wonder whether President Obama and Prime Minister Cameron attended their respective history classes while at school or spent those lessons having a sly smoke behind the bicycle sheds. 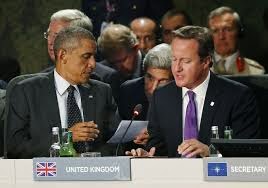 Even more recent historical confrontations such the liberation of both the Falkland Islands and Kuwait would indicate that their pathetically feeble responses to continued ISIS atrocities are not based on military might or tactics but their 'progressive' ideology.

As the gruesome beheading of another innocent victim of radical Islam goes viral on the Internet, both President Obama and Prime Minister Cameron are attempting to appease the adherents of Islam with platitudes that are not only falling on deaf ears in their respective countries but also with the knife wielding Muslim fanatics in the desert.

President Obama's  assertion that ISIS is not Islamic will go down as one of the most amateurish attempts at appeasement in political history while his assertion that ISIS is not a state is neither here nor there. With the current disposition of forces and people, Syria and Iraq are states in name only and then only in the eyes of UN bureaucrats and politicians like President Obama and Prime Minister Cameron.

President Obama's appeasement of Islam is for the American people to deal with, likewise the simultaneous policy by David Cameron and his government is for the British people.  He will be hoping beyond hope that their memories won't stretch as far as the general election which is due in May 2015.
(He is reduced to hoping because he is unable to pray. Christianity is discouraged in Cameron's Britain and praying, like the English flag of St. George, is offensive to Muslims).

Statements emanating from both the British and American governments intimate that ISIS cannot be immediately beaten militarily with Obama promising a gradual degrading of ISIS power and its eventual defeat, while David Cameron is promising a limited military campaign with a generational struggle against radical Islam and home grown ISIS operatives.

Both leaders obviously share the same spin doctor as their comments about ISIS not being Islamic and the long campaign to degrade and ultimately defeat them are identical. Their attempts to distance ISIS from Islam are disingenuous, totally false and an example of their determination to give Islam comparable status with Christianity in their respective countries.

With this defeatist attitude it's no wonder defeating ISIS is impossible and one is entitled to ask how the British and their allies defeated Hitler and Mussolini during World War II or how the Americans defeated the Japanese after Pearl Harbour.

Reports indicate that ISIS has tripled its personnel from some ten thousand to a whopping thirty thousand and they have acquired some arms and other American supplied military hardware from retreating government troops. They have no air power or navy or any special skills to match the sophisticated weaponry and training of the western forces.

Military experts teach us about the brilliance of the military campaign to kick Saddam Hussein out of Kuwait - we learn how Norman Schwarzkopf and the coalition forces defeated the Iraqi army, including the battle hardened Republican Guard, in a matter of days with his famous 'left hook' charge across the desert.

We also learn about 'shock and awe' and the ousting of Saddam Hussein using sophisticated military technology and superior tactics against a well trained and numerically superior Iraqi force.

The liberation of the heavily defended Falkland Islands from the Argentinian military junta by the British will go down in the annals of military history owing to the fact that the liberators had to sail halfway around the world to get there.

Despite the determination of President Obama and Prime Minister Cameron to downgrade their military machines, the current strength of the combined British and American forces stands at approximately one and a half million personnel plus around nine hundred thousand reservists. They have access to the most sophisticated weaponry available and the undoubted commitment of brave, well trained men and women.

ISIS has some thirty thousand personnel and are armed with captured Humvees, light armoured vehicles and small arms. Some of their personnel are no more than brainwashed schools kids, disenchanted adolescents who are not culturally advanced enough to fit in to western society, ruthless jihadis full of religious zeal for Allah and their prophet and some operatives who are nothing more than inadequate, bloodthirsty savages who enjoy raping and killing for the sake of it.

I am not an expert on things military and I would be happy to be corrected, but it would appear that a battle against ISIS and its inevitable defeat would be short and sharp if the military were allowed to get on with the mission without interference from agenda driven politicians.

Why President Obama refuses to defeat ISIS in battle is not for me to speculate on but Prime Minister Cameron's refusal is due to his obsession with  'cultural sensitivity' together with a wish not to offend Muslims at home. This is combined with his total subservience to the same political correctness that is choking the life out of British democracy and killing free speech.

Radical Muslims, especially those returning from the battlefield, flushed with religious zeal and an unquenchable blood lust are a clear and present danger. Murderous acts have already been committed on the streets of Great Britain in the name of Allah, including beheadings. David Cameron's commitment to the cultural replacement agenda and political correctness is total and it takes absolute priority over the safety and security of the British people.

Despite Muslim inspired bloodshed on the streets of Great Britain, despite the rape and sexual torture of thousands of under age white girls by Muslim men and despite the continuing demands that the British people change their way of life to accept Islam, Prime Minister Cameron and the political class continue to paint Islam and its adherents in glowing terms. They continue to refer to what is obviously a medieval desert death cult as 'the religion of peace'.

The British people will not be free of the threat of ISIS or radical Islam while Prime Minister Cameron and the other collaborators in the political class are removed from office and replaced with politicians who put the peoples interests above that of the global elite and their cultural replacement agenda.

In conclusion it's worth pondering on how the country that produced recent war leaders such as Sir Winston Churchill, Viscount Montgomery of Alamein, Bomber Harris, Margaret Thatcher, Admiral Sir John 'Sandy' Woodward and many more unsung heroes, can end up with leaders such as David Cameron, Ed Miliband and Nick Clegg. 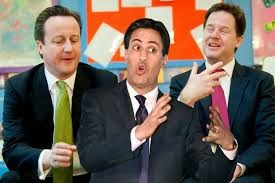 Posted by Daniel Thomas at 3:47 PM