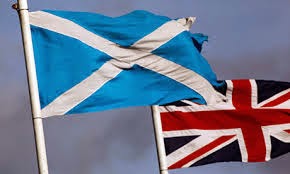 Now that the dust has settled and the bitterness of the referendum campaign goes dormant until the next time some self serving politicians decide to stir it up for their own benefit, it is worth looking at some of the issues from a different perspective. Looking at things in this way raises many questions and also gives a clear demonstration of how the English people are ignored, taken for granted and generally used and abused by a political class who shamelessly take advantage of their good nature for their own benefit.

The decision by the Scottish people to remain part of the United Kingdom was not universally accepted by the English people and had they been allowed to take part in the same referendum they may well have voted to kick Scotland out of the Union. Even for supporters of the Union the result is tinged with more than a little regret and it can be regarded as a lost opportunity for some desperately needed political reform.

The British political system is outdated and corrupt beyond belief - there are no checks and balances to prevent an all powerful executive branch of government. This all powerful executive branch consequently packs the legislative and judicial branches of government with supine, like minded cronies who are hard wired to ignore the wishes of the people on every issue.

This same executive branch also controls appointments to the second chamber - this is the notoriously corrupt House of Lords - together with senior appointments to the civil service, the quangocracy, the established church, and familiar institutions such as the BBC and the NHS. The British Prime Minister has so much power its makes your average third world dictator green with envy.

The one group of people left powerless by this corrupted system are the British people themselves and despite their superior numbers, the English people in particular.

Such is the influence of Scottish politicians in English life that many pundits were asking the question of exactly who is wanting independence from whom?

During the campaign, the economic arguments about oil revenues and the share of the national debt rumbled on with both sides claiming victory but even a first year math student can work out that an independent Scotland would be as bankrupt as Greece or Ireland from the outset.

An independent Scotland would be as dependent on bail outs as any other country where the politicians ignore the rules of arithmetic and consistently spend more money trying to buy votes than they can rip off from the taxpayers.

Setting up and buying off dependent client groups is what British politics has been reduced to in the modern era where morals, dignity and principles have been abandoned in favour of the deliberate exploitation of media generated envy and victimhood.

The desperate last minute commitment by the three establishment party leaders to increase government spending per head in Scotland was revealing for several reasons.

Firstly, this fiscal stunt confirmed that they are prepared to ditch any principles they may have had to indulge in the outright bribery of a particular client group, i.e. the Scottish people.

Secondly, with the economy operating in deficit, with ruinous levels of debt and with the costs of another war, increased foreign aid and a High Speed Railway to be paid for, their claim of fiscal responsibility is proven to be false.

Thirdly, the three establishment party leaders are showing their complete and utter contempt for the English people by making these promises with the people's hard earned money without having the decency to consult them or seek their approval in advance.

Conservative party leader David Cameron, along with Nick Clegg for the Liberal Democrats and Ed Miliband for the far left Labour party, are supposed to be irreconcilable ideological enemies but the common cause they shared during this campaign, along with other common causes such as EU membership, open border mass immigration, multi-culturalism, combating climate change, deficit spending and debt etc., clearly demonstrates that they are part of the same corrupt political establishment.

This unjust largess toward the people of Scotland at English taxpayers expense is matched by the equally unjustifiable democratic deficit know as the West Lothian Question. Without getting too technical, it means that issues unique to Scotland are dealt with by the devolved Scottish parliament in Edinburgh where English MP's are excluded. The same applies to the Welsh Assembly government in Cardiff and the Northern Irish Assembly in Belfast where English MP's are also excluded.

Denied a Parliament or Assembly of their own, issues unique to the English people are dealt with by the Westminster Parliament where MP's from all over the United Kingdom can participate, thus English hopes and aspirations for their country are either ignored or overruled by non English legislators.

The lives of the English people, together with their traditional way of life have been influenced by Scottish people for generations but they were shattered beyond belief with the accession to power of the Tony Blair government in 1997.

Blair's government was controlled by a cabal of Scottish socialists and after thirteen years in the political wilderness they put into practice their long prepared plan to fundamentally transform England and replace its way of life with a so called 'multi-cultural society'.

This transformed society would not only replace England's culture and way of life but it would also replace its centuries old, hard won traditions of common law, civil liberties and free enterprise, with welfare dependent client groups and socialism.

It must be noted that the English people themselves must accept some of the blame for not paying attention to what the people in whom they placed their trust were doing. They must also accept some blame for continually electing into positions of power malignant people who bear an animosity toward them, together with their way of life, and who then go on to do them and their country harm.

In order to give veracity to these assertions it's worth looking at the leadership of the anti-English legacy parties in the modern era.

The Liberal Party had eight leaders from 1926 until its dissolution in 1988. Three Englishmen, Two Welshmen and latterly two Scotsmen.

Since 1988 when the party morphed into the Liberal Democrats there have been six leaders; one Northern Irishman, one Englishman (for two months only) and three Scotsmen. The current leader, Nick Clegg, is a virulently anti-English first generation immigrant who's undivided loyalty is to the European Union.

The Labour Party had five leaders between 1908 and 1921 all of which were Scottish. From 1921 to date there have been 17 leaders, eight were English (two of which were short-term caretaker leaders only), one was Welsh of Scottish descent and five were Scottish. The current leader, Ed Miliband is an anti-English first generation immigrant and dedicated Marxist, who like his Liberal Democrat colleague, is committed to surrendering what's left of Great Britain's sovereignty to the unelected bureaucrats of the European Union.

What is interesting to note is that since the Thatcher era the Labour party leadership passed from a Welshman to a Scotsman then on to two more Scotsman before the current anti-English Ed Miliband was put in position by the socialist led Trade Union, Unite.

The last two Labour Prime ministers were Scottish with the current Conservative Prime Minister, David Cameron, having a Scottish heritage and who is claimed by the clan Cameron.

As mentioned earlier it was the Tony Blair government that laid waste to England and its way of life and looking at his Ministry one can understand why.

Blair himself is a born and bred Scotsman with eleven of his twenty one person Cabinet being non English, seven of who were Scottish.

The Chancellor of the Exchequer, Gordon Brown and his First Secretary Alistair Darling were Scottish who went on to wreck the British economy leaving insurmountable debt in their wake. Brown went on to become Prime Minister where he finished the job of wrecking England and its way of life.

The long ignored demand for an English Parliament cannot in all conscience be denied any longer. The passionately argued reasons from both sides of the referendum, from full independence to more devolution, apply equally to England. How could they possibly not?

The Prime Minister's promise to include English devolution in the settlement package for Scotland is being met with fierce resistance from those that want to continue their malign influence over English life. Howls of outrage are being heard from both Ed Miliband, Nick Clegg and a host of Scottish power brokers who justified more devolved powers for the Scottish people but deny the same justice for the people of England.

The reason for this blatant hypocrisy is twofold:

Firstly, Scotland sends fifty nine Members of Parliament to Westminster, forty of which are Labour. Wales sends forty, twenty six of which are Labour. With an English Parliament looking after English affairs the Labour Party will lose sixty six MP's and with it their power over England's affairs. This could signal the long awaited end of socialism in Great Britain once and for all.

The Liberal Democrats have been exposed as a duplicitous party of collaborators who are dedicated to the end of Great Britain as an independent sovereign nation are on course to be decimated at the next election so they are of no consequence.

Secondly, the British people as whole are hungry for a change from the old corrupt political order and they are deserting them for the United Kingdom Independence Party, known by its iconic initials, UKIP. This new party is like a breath of fresh air, cleansing the fetid stench of the self serving political swamp of Westminster.

The English people can only benefit from the demise of this old political order and if they stay strong, hold their course and continue to fight for their just rights of self government they can be a nation once again and start the return to prominence and dignity of the United Kingdom of Great Britain and Northern Ireland.