British ISIS Terrorists - David Cameron Not So Tough After All 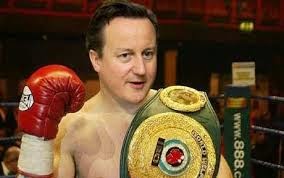 It didn't take long for David Cameron's tough action plan to combat Great Britain's home grown ISIS jihadis to be unmasked for the worthless PR exercise that it was. The anti-Obama media outlets in the USA, including Fox News, would have done better to talk to the long suffering British people before they started touting Cameron as the proactive, tough talking pragmatist that they wanted their President to emulate.

The British people have heard it all before as his latest shameless attempt to convince the electorate, and the wider world at large, that he is a fearless, no nonsense statesman who will not hesitate to take the tough decisions necessary to combat the ruthless ISIS terrorists that are the creation of his own policies.

The world's media outlets and their political pundits understood from Cameron's spin doctor produced speeches that he was going to remove the passports from the hundreds, perhaps thousands, of British Muslims who have joined the jihad in places such as Syria, Iraq, Somalia, Chechnya and elsewhere.

They also understood that he was going to fulfill his long held ambition to have his own war by bombing Syria and arming the rebels - however he failed to make it clear which rebel faction he was going to arm. And what better way is there to create a new Johnny Rambo type action man image than confronting the macho man himself, Russian President Vladimir Putin. Cameron has threatened to put three and half thousand troops on the Ukrainian border to discourage Putin's army from supporting the Ukrainian separatists. Putin must be quaking in his kerenky. 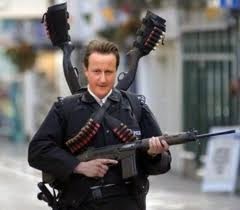 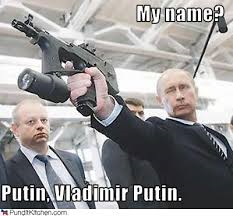 It doesn't take long for the discerning observer to take apart this latest choreographed Cameron performance especially if his pedigree and modus operandi are taken into account.

David Cameron adheres to the new system of politics that was pioneered by his mentor, Tony Blair. His PR machine uses focus groups and pollsters to work out the issues that are of most concern to the different demographic groups, they then manufacture his speeches and choreograph his public performances to appeal to the majority in each group, while at the same time keeping his real agenda under wraps.

Knowing full well that the majority of the British people despise the EU, he stated that he would be the most Eurosceptic Prime Minister in history. After attaining office he stated that he "firmly believes Britain's place is inside European Union". He was then, and remains, a committed supporter of 'ever closer union' and the eventual integration of Great Britain into the United States of Europe.

His 'cast iron guarantee' that the British people will get a referendum on EU membership will go down as one of the biggest whoppers in political history.

Cameron continues to promise a re-negotiation of membership terms despite the fact that his bosses in Brussels, including German Chancellor Angela Merkel, have said no re-negotiation is possible. He is promising a referendum on membership but not before 2017 and only if he is re-elected as Prime Minister.

As a flavor of Cameron's propensity for making false promises for electoral gain, in 2007, prior to his election, he promised a series of measures to deal with violent crime. This included tearing up the twenty four hour drinking laws, minimum sentencing, using prison ships, building more prisons, supporting marriage through the tax and benefits system. etc. His government promised to cut taxes, including inheritance tax, deal with the deficit and cut the debt. It's now 2014 and none of these promises have been delivered.
(See some of Cameron's fibs here)

The biggest issues by far for the British people are open border mass immigration together with imposed multi-culturalism and Islamification. It is in this arena that David Cameron comes into his own as a consummate PR man and congenital liar. It is these dubious skills that caused the world's media to mistakenly portray him as a tough, uncompromising, decision taking statesman when confronted by British born ISIS fanatics and radical Islam.

Cameron's knowingly false promise to cut net immigration from the hundreds of thousands to the tens of thousands put paid once and for all the myth that he has even an iota of credibility. Immigration has gone inexorably up year on year despite the fact that it is within his power to fulfill this promise.

With his reputation as a mere PR man firmly established, his latest tough guy performance can now be looked at in a truer light and his pronouncements dissected to reveal their real purpose, which is image making and spinning for electoral purposes.

At the recent NATO summit, statesman Cameron noisily stated that he doesn't need President Bashir al Assad's permission to bomb Syria as he doesn't recognize him as the countries legitimate leader. He also claimed that Assad is part of the problem. One week later his Defence Secretary, Philip Hammond has ruled out any bombing of Syria.
(Cameron bombing Syria here, Cameron not bombing Syria here)

He carries on making knowingly false promises in the forlorn hope that the British people will take him seriously when their experience of his past pronunciations  and the consequences of his lying are there for all to see:

He promised to clamp down on Muslim preachers of hate - false

He promised to teach British values in schools - false

He promised to stop further integration to the European Union - false

And so it goes on and on, he seems to be incapable of being straight with the British people even when they know what his real agenda is.

David Cameron is a self admitted Europhile who is totally dedicated to the integration of Great Britain into a post democratic United States of Europe. He is therefore committed to replacing the traditional way of life with a 'multi-cultural society' and using rigidly policed political correctness to achieve this goal. 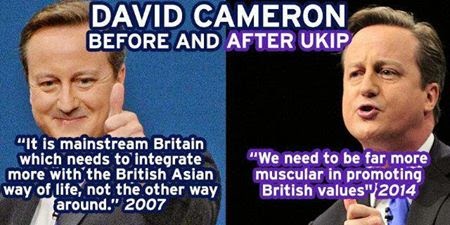 He is completely out of step with the majority of the British people and this is demonstrated by the flight of his traditional supporters to the United Kingdom Independence Party (UKIP) and with this comes the prospect of political oblivion for him and his treacherous fellow travelers.