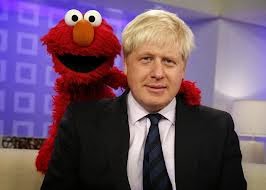 When he used a sexual analogy to denigrate defectors from his sinking party to the United Kingdom Independence Party, known as UKIP, London's Mayor and prospective leader of the Conservative Party, Boris Johnson, put two gaping flaws on display for the whole word to laugh at.
(Johnson smear here)

Firstly, the need to devote part of his Conservative Party conference speech to denigrate a political party that he claims is going to be annihilated in the coming elections is a clear demonstration that he is deceiving his followers by playing down the threat of UKIP. If they were that insignificant they wouldn't warrant a minute of his precious conference time, let alone the time he spent thinking up an unfunny sex related smear.

Secondly, using a jibe about a perverted sexual practice to denigrate political opponents is a bit rich coming from a political party that is home to more than its share of perverts, paedophiles and fornicators, including Johnson himself.

Boris Johnson is putting himself forward as an alternative to the current party leader, the British Prime Minister, David Cameron. In an attempt to portray himself as different to the media created sophisticated but caring image of David Cameron, Boris Johnson's media managers are creating the image of the highly educated, down-to-earth, lovable buffoon.

His shock of blonde, unkempt hair and practiced oratory, seems to strike a chord with the more gullible members of the community, but in reality it is nothing more than the same premeditated vulgar populism that has been employed by petty demagogues throughout the ages.

Listening to both politicians it is plainly obvious that there is not an iota of difference in policy between Boris Johnson and David Cameron. This is not surprising since they not only enjoyed an identical upbringing and exclusive education at Eton College and Oxford University, they also make use of the same political strategist and media manager to choreograph their public performances.

The fact that they both make use of Lynton Crosby, a professional political strategist from Australia who has little or no connection to Great Britain, is a clear demonstration that these two politicians have no intention of listening to the hopes and aspirations of the British people. Instead they are looking to get themselves voted into office using spin and media management, keeping their real transformational agenda out of the campaign.

Both politicians not only believe that the remainder of British sovereignty should be permanently surrendered to the European Union bureaucrats, they are actively working to achieve that end.

Likewise they are acting on the demand by these same bureaucrats that the traditional British way of life and culture be replaced by a so called 'multi-cultural society' as a precursor to constructing a generic Eurasian European identity.

Both politicians are frightened witless by the rise of UKIP and the threat, not only to their hold on political power, but to their European federal state agenda. Also at stake are their future positions of power once the United States of Europe has been imposed.
(Fear of UKIP story here)

With the advent of professional political strategists, media managers and spin doctors, such as Lynton Crosby, the days when policy issues were debated by prospective public servants are long gone. Principles and truth, right and wrong have been replaced by optics or how it plays in the media.

With a strategy based on public perception as opposed to right or wrong it was inevitable that smearing opponents would become a much used tactic along with calculated deception and shameless lying.

David Cameron started the ball rolling by accusing the millions of UKIP supporters of being, "fruitcakes, loonies and closet racists", simply because he couldn't debate the policy issues. He still refuses a public debate with UKIP leader Nigel Farage on the EU agenda.

There was no justification for Cameron's vilification other than UKIP's policies were proving to be more popular than his own which has resulted in thousands of electors abandoning his sinking ship.

Ironically the smear by Boris Johnson originated from yet another intrusive diktat from the European Union that will dictate the power of British vacuum cleaners and kettles.

Johnson likened Conservatives who defected to UKIP to people who had sex with vacuum cleaners. How this is remotely funny is a mystery but it is a smear all the same. Like his leader David Cameron, Johnson cannot debate the issues therefore he resorts to smear using some kind of sexual innuendo.

One would have thought that with his exclusive education and political experience, not to mention advise from his media managers, Boris Johnson would have put more thought into his sex jibe bearing in mind his own sexual proclivities and those of his fellow Conservative Party politicians.

His attempt to use sex as a smear has backfired spectacularly which has invited ridicule upon himself and his party and given the British people a reason to laugh at his expense.

Hilariously, Boris Johnson made his deviant sex remark on the same day that a perverted government minister Brooks Newmark was forced to resign for sexting explicit pictures of himself to women.

As an indication of his breathtaking arrogance, in his resignation statement Newmark expressed his undying loyalty to Cameron's Conservative party and asked for the privacy of his family to be respected.

Bearing in mind the history of sex scandals in the Conservative Party, including himself, Johnson made a bad choice of subject to belittle and smear defectors to UKIP.

For all the UKIP supporters and prospective defectors from his sinking party, forget about domestic appliances for the moment and enjoy a laugh at Boris Johnson's risible attempt at humour.

A play around with a vacuum cleaner would have saved Johnson's long suffering wife Marina and their four children the humiliation they suffered after his extra-marital affairs with a succession of ladies including journalist and author Petronella Wyatt and Helen Macintyre with whom he fathered a love child.

Much mirth engulfed the nation when it was revealed that the grey man himself, former Conservative Prime Minister, John Major was cheating on his loyal wife Norma with none other than Edwina Curry. Millions of self respecting men would prefer a session with a vacuum cleaner than a roll in the hay with the formidable Edwina.

Conservative government minister David Mellor enjoyed an extra-marital affair with the luscious Antonio de Sancha. It was rumoured at the time that Mellor liked to wear his Chelsea Football Club kit while indulging in his bedroom sessions with Ms. de Sancha.

It would be interesting to know what Boris Johnson has to say about the 1991 Conservative party conference at which their MP Jerry Hayes cheated on his wife by committing a lewd act with his under age gay lover. His actions were a criminal offence at the time and it was the height of hypocrisy for Hayes to be supporting Section 28 and other anti-gay legislation.

It was revealed in Edwina Curry's memoirs that Conservative MP Sir Peter Morrisson was a serial paedophile that liked nothing more than sex in public lavatories with under age young boys.

We have recently been made aware of an earth shattering sex scandal at the heart of Cameron's government in 10 Downing Street. This apparently would have a detrimental effect on Cameron's administration and 'blow his agenda out of the water'. As the issue has gone quiet the people are assuming there's a high level cover up.
(No 10 sex scandal here)

A similar cover up has removed the recent Conservative Party and Westminster  paedophile scandal from the headlines. This scandal engulfed the government and implicated senior Tory statesman Leon Brittan. The original enquiry was cancelled when the impartiality of the proposed chairperson Baroness Butler Sloss could not be guaranteed.
(Story goes back to 2013. See here)

It is worth reminding Boris Johnson of the sad case of Conservative MP Stephen Miligan when he is inferring that UKIP supporters and possible defectors are people who would enjoy a deviant sexual relationship with a vacuum cleaner.

Miligan was found in his bedroom hanging from a flex, dressed in stockings and suspenders and covered in a black bin liner with a tangerine in his mouth. Johnson obviously hasn't heard the age old proverb - "People in glass houses shouldn't throw stones".

In conclusion, I would ask Boris Johnson whether defecting to UKIP and having a roll around with a Dyson or a Hoover (or both) is any worse than remaining in a political party that not only wants to sell out the British people to EU bureaucrats but is home to more than its share of deviants, perverts and fornicators such as himself.