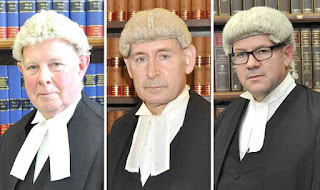 The headline quote has been attributed to American author, Mark Twain; the sentiment he expressed therein has been proved accurate by three activist judges who overturned the overwhelming vote by the British people to take back their sovereignty from unelected foreign bureaucrats and leave European Union.

The trio are typical of the remote elite who believe that only they are qualified to decide the future of the British people since, according to these noble lords, the people don't have the intelligence or intellectual capacity to decide for themselves. In other words the people are too stupid to know whats best for them and the future of their country.

Gone are the days when judges applied the laws that were passed by the Mother of Parliaments or when need arises used precedents set by previous legal arguments. Taking their lead from the unelected European Union bureaucrats, these judges have appointed themselves as law makers, ignoring Parliament, past legal precedent and most importantly, the will of the British people.

The decision to ignore the law and past precedent to overturn the will of the people as expressed in the Brexit referendum, will come as no surprise when one looks at the loyalty of the the leader of this Gang of Three.

Great Britain's most senior judge labours under the grandiose title of Lord Chief Justice Lord Thomas of Cwmgiedd; he is a political activist with an agenda who uses his position as a means to achieving his political ends.

Like most of the establishment, he is a committed Europhile who does not want Great Britain to leave the EU. He is also the founder member of the European Law Institute who's mission in life is to impose European legal integration on the British people whether they want it or not.

Known as Royal Prerogative, the authority to enter into and withdraw from treaties has been delegated by the Her Majesty the Queen to the Prime Minister and the Foreign Secretary. This authority been used by all the previous holders of those offices to enter into multiple treaties over the decades that transferred the sovereignty of Parliament to the EU without recourse to the courts.

Now that this same Royal Prerogative is used in favour of the British people it is cancelled by three unelected, activist judges who ignore the current law and past precedent in order to protect their political agenda.

This outrage is not only an affront to democracy and contempt for the people, it's clear indication of the power of the establishment and the level of control they have over the future of Great Britain and it's people.

For the unelected elite that run the bureaucratic monolith, the European Union is very lucrative indeed where personal fortunes are made off the backs of the long suffering people. It has however been a disaster for the economies of the nation states leaving bankruptcy, poverty and misery in it's wake. Open border mass immigration has been a complete and utter disaster leaving rape, sexual assault and mass murder in it's wake.

This awful reality won't be of any concern to this treacherous trio of activist judges because, like the rest of the EU hierarchy, they exist in a remote world of ivory towers surrounded wealth and privilege and do not suffer the consequences of the nightmare they are imposing on the mortals below.

Curse on them and all their houses.