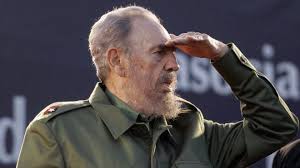 As Cuban dictator, Fidel Castro, changes his status from earth bound blood-soaked tyrant to hell bound unmourned cadaver, only members of the western global elite and their useful idiots appear to be sad at his passing. All it needs now is for the Pope and the Archbishop of Canterbury to put in a good word and he can truly be absolved of his crimes to rest in eternal peace.

This was an ideal opportunity for western leaders and the UN /EU axis to condemn Castro and all his works along with all the other blood soaked tyrants and human rights abusers that still infest the planet murdering and oppressing millions of people who bravely oppose their tyranny.

For the supposed leader of the free world, President Obama was less than forthcoming with any criticism of Castro's appalling human rights record while the socialist President of France, Francoise Hollande, was positively glowing at the tyrants contribution to history.

Equally glowing was the far left leader of Great Britain's once noble Labour Party, Jeremy Corbyn, who reduced his hero's penchant for incarceration, torture and murder of tens of thousands of innocent Cubans to excusable 'flaws'.

Jeremy Corbyn, and fellow members of the Labour movement,hailed their hero's abolition of inequality, the creation of a national health service and improved literacy standards as Castro's signature achievement's; they failed to mention however the torture chambers, show trials or the firing squads he used to impose his will.

In the real world, abolishing inequality in Cuba means everyone except the ruling elite being equally poor, a national health service for the poor consisting of understaffed, filthy hospitals and improved literacy standards meaning cab drivers, shoeshine boys and beggars that can read the state controlled press and incessant government propaganda. They are unable to use their high literacy standards to read news on the Internet because it's not allowed by the tyrant's decree.

It would appear that only the President elect of the USA and next leader of the free world, Donald Trump, spoke of the true nature of Castro and his murderous regime expressing hope for a future Cuba free from tyranny and oppression.

The past decade or so has seen a number of old communist tyrants shuffle off their mortal coils leaving trails of economic and social devastation in their wake, not to mention appalling human rights abuses of the most grievous kind.

With his passing in December 2013, Saint Nelson Mandela, leader of the communist African National Congress, became a good commie who managed during his Presidency to reduce South Africa's powerhouse economy to rubble leaving the so called Rainbow Nation poverty stricken and wracked with internecine tribal and xenophobic violence.

Communist North Korea's Kim Jong-il departed earth leaving his country nuclear armed but with it's citizens eating grass and each other to ward off hunger during their endless famine. His son and heir Kim Jong-un expanded the concentration camp system and appears to take great pleasure killing his uncles and other relatives who he perceives to be his enemies.

Fidel Castro's good friend and comrade, Hugo Chavez - the celebrities favorite blood-soaked tyrant - became a good commie after dying and leaving resource rich Venezuela destitute with it's citizens reduced to scavenging garbage heaps for food. He famously left them with shortages not only of food but basic commodities such as condoms and toilet paper.

Some wit opined that 'the road to socialism in Venezuela is paved with unwanted babies and unwiped a*ses'.

Castro was instrumental in spreading his communist revolution abroad, most notably in Angola and Nicaragua where oppressive regimes are still stifling economic progress and prosperity for the masses  to this day while at the same time oppressing and abusing human rights in the same time honored communist fashion.

Fidel Castro installed Comrade Augustino Neto in Angola who became a good commie in 1979. He died after wrecking the oil rich economy and enriching himself. His successor Jose Eduardo dos Santos is still President today after thirty-seven years despite being limited to two terms in office.

Castro's favorite son, Daniel Ortega of Nicaragua, is back in power wreaking the usual havoc in Central America causing an exodus of the Nicaraguan and Salvadorian people to the Great Capitalist Satan located to the North.

The world is a better place now Fidel Castro has gone to meet his Maker but communist dictators of his ilk, including his brother Raul, still stubbornly remain in power in places such as China, North Korea, Zimbabwe, Angola, Central and South American countries and off course the European Union to name but a few.

More worrying is the plethora of ruthlessly dedicated aspiring communist politicians who, using false names such as democratic socialist, liberal, or progressive, plot endlessly to achieve power in order to impose the same Marxist theology that destroyed Cuba onto the western democracies.

The aforementioned Jeremy Corbyn in Great Britain is a classic example along with Hillary Clinton and Bernie Sanders in the USA, Martin Schulz, Donald Tusk and Jean-Claude Junker in the European Union and a whole host of unnamed agents and operatives in the United Nations de facto world government which is insidiously accumulating power using treaties to bypass national legislatures.

Freedom loving people around the world must remain vigilant at all times because the enemies of freedom will never cease their pursuit of power in order to impose their will and their perverted ideology onto them and their posterity.

Posted by Daniel Thomas at 2:20 AM