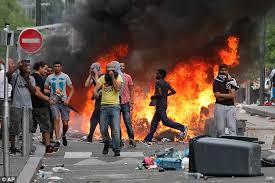 It doesn't take a genius to work out that the insertion of millions of backward, incompatible young migrants, mostly male, into the advanced civilized societies of Europe would eventually end in violence and civil strife.

The political elite running Europe on behalf of the UN de facto world government accepted this as a possibility and took steps to neutralize it by using intimidation, threats, rigidly policed political correctness and one-way hate crime laws applicable only to the indigenous citizens.

On top of this they used the various wholly owned government-media complexes to embark upon programs of pro multi-culturalist propaganda combined with censorship, which has been one of the favourite tools of authoritarians and tyrants down the ages.

Germany, the New Years eve rape and mass sexual assaults perpetrated by Muslim migrants in multiple cities was the first ominous sign of things to come. The lack of action by the government has resulted in an explosion of crimes committed not only by Muslims but by a variety of illegal immigrants, asylum seekers and economic migrants. (See here)

In response, Germany's obviously insane Chancellor, Angela Merkel, ordered the police to stand down and ignore any crimes committed by immigrants thus leaving her own citizens at the mercy of the invading hordes of hormonal young men from backward, misogynistic societies. (See here)

In a further indication of Merkel's insanity she has ignored this explosion of immigrant violence and decreed that Germany's borders remain open to millions more rapists, violent criminals and terrorists.

The German people have been abandoned by their government in favour of immigrants and they have had enough. Violent civil unrest has broken out with street fighting rampant across the country. Mad Merkel and her government refuse to accept that this violence is due to their policy of open border mass immigration, blaming instead 'right-wing' extremists. (Civil unrest and street fighting here)

Unless Merkel and her government accept that the deteriorating situation is due to mass immigration and take appropriate action then civil war is inevitable. (Muslim migrants raping women and children in German camps here)

Sweden, a developed European country once regarded as the perfect example of multi-culturalism, has been so disfigured by mass immigration the UN has projected it will officially become a Third World country by 2030, overtaking bankrupt Greece and Muslim dominated Belgium. (See here)

Sweden now has the dubious honour of being the rape capital of Europe and possibly the world, and like Germany, the authorities have responded with censorship, threats and intimidation against it's own citizens in favour of it's immigrant hordes.

The fightback by the Swedish people has brought this multi-cultural utopia to brink of civil war with the police reaching breaking point and unable to prevent attacks on migrants. (See here)

France and the French people, as the world knows, have been the victims of multiple terrorist attacks in the recent past but the political class stubbornly refuses to control it's borders preferring instead to subject it's citizens to rape, sexual assault, violent crime and mass murder.

The self inflicted wound of allowing tens of thousands of illegal immigrants and economic migrants to traverse the country and set up camps around the channel ports and Paris has festered and burst.

Thwarted in their attempts to smuggle themselves into the welfare El Dorado that is Great Britain, combined with turf wars between different ethnic groups, has brought war to the streets of Paris, Calais and elsewhere. (See here)

Inter communal strife and violence is also breaking out in Great Britain, Poland, Czech Republic, Greece and Italy. To add to the conflagration Muslim migrants have gone on a terrifying rampage on the Austria/Italy border. (See here)

What we are witnessing is the collapse of Europe using open border mass third world immigration and I suggest the American people pay close attention before they vote in the up and coming Presidential election because the same fate awaits them should they make the wrong choice. (The collapse of Europe here)

In conclusion, the European nation states with their respective cultures and ways of life are being willfully destroyed by a global political elite hell bent on creating a new world government where they, the rich and powerful will rule over us the plebeians by diktat as opposed to consent.