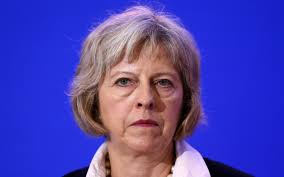 It's been over one hundred and fifty days since the British people voted to take back their sovereignty and become an independent, self governing nation once again by leaving the corrupt and disintegrating European Union.

This has been accompanied by a series of meetings with high profile Europhile politicians who have vowed to do everything in their power to ignore the people's mandate, sabotage Brexit and surrender whats left of Great Britain's sovereignty to the unelected bureaucrats that are in the process of wrecking the nation states of Europe and their economies.

In an encounter dismissed as a mere courtesy call, Mrs. May and the Chancellor of the Exchequer, Phillip Hammond, also met with the geriatric American war criminal and senior Bilderberger, Henry Kissinger, who many regard as a senior power broker and enforcer for the global elite.

Despite being self declared committed Europhiles dedicated to preventing Brexit, they have all been appraised of Theresa May's intentions with reference to Brexit and they will all be given a say in the final outcome. The only two groups being excluded and kept perpetually in the dark are the United Kingdom Independence Party (Ukip) who won the right for a referendum in the first place and the British people who have to make do with the aforementioned meaningless soundbite "Brexit means Brexit".

There are a couple of facts that need to be taken into account when analyzing the behavior of the Europhiles, which includes Theresa May, that will give some indication as to the future of Brexit.

Firstly, the ruling EU bureaucrats have never in their history honored a referendum result that opposes the transfer of sovereignty from the nation states or hinders in any way the progress toward a United States of Europe. There is no reason to believe they will respect the Brexit result.

Secondly, the dedication of the political elite to their superstate project is fanatical and absolute. Like the socialist/communist/progressive community in America and worldwide they will never, ever give up. Nothing will get in the way of their agenda and especially not election results or mandates from the people.

With the battle assumed to be won the Brexit side stood down their organizations and celebrated their historic victory without taking into account the two aforementioned facts which, as some of us warned, would come back to haunt them.

The battle may have been lost but the war goes on for the fanatical Europhiles from the Remain camp and as mentioned earlier they will never give up on their beloved European superstate project.

While the Brexiteers congratulated themselves and basked in the glory of their stunning victory the Remainers regrouped and led by the taxpayer funded BBC they continued to campaign relentlessly with blatant propaganda and fake news stories blaming Brexit for every negative issue.

The establishment and the government institutions, including the politically active judiciary, are back up and running and fully on board with the anti-Brexit effort to remain in the EU.

Politically motivated judges have put legal obstacles in the way of Brexit that could delay the process for years and possibly for ever.

Taking advantage of the endless prevarication and lack of action by PM Theresa May the Europhile Remain camp have seized the initiative and built up some serious momentum to the point where they are openly calling for the result to be declared 'advisory' and for the overwhelmingly Europhile Parliament to override the people's mandate.

Also in the Europhile armory is the call for a second referendum to overturn the result of the first one. The justification being that the people were lied to and were not made aware that Brexit meant leaving the single market.

This is a lie of epic proportions and a bit rich coming those who organized the biggest tissue of lies in any election campaign ever, namely Project Fear.

Since leaving the EU can take up to two years, why Mrs. May refused to initiate the Brexit procedure immediately defies logic and bearing in mind the past history of the EU of ignoring referendum results it displays unsound political judgment.

If she is deliberately prevaricating in order to organize a stitch-up for Great Britain to remain inside the EU then this prevarication is a calculated political ploy rather than a poor political judgment.

At time of writing speculation abounds that Brexit will be delayed even further into 2017 with Mrs. May herself  hinting that there could be an 'interim' Brexit arrangement which could see Great Britain attached to the EU for decades to come.

The EU is on the brink of civil war due to open border mass immigration and facing economic meltdown; this combined with positive economic indicators for a post-Brexit British economy gives Mrs. May not only an unassailable negotiating position but also the option of walking away from the table if the Eurocrats refuse to cooperate leaving it in an even more precarious and dangerous position.

Whether the lack of action by Mrs. May is by accident or design is open to speculation but whichever it is the Europhiles in the Remain camp have taken full advantage and seized the initiative making Brexit more unlikely with every day that passes.

Posted by Daniel Thomas at 2:50 AM