After Israel And The Jews Have Been Erased, Will There Be Peace?

As the battles rage in Gaza and criticism of Israel reaches a crescendo of naive hysteria, it is worth examining the consequences should Hamas and Hezbollah, together with the people that give them succour and support, were to achieve their much publicised objectives.

Western apologists for the Palestinians should be under no illusions, there is no ambiguity in these objectives, they are clear and precise with no room misinterpretation. Israel must be erased from the earth and every Jew subjugated or killed. There is no two state solution, every offer has been refused by the Palestinians as any deal will require an acknowledgement of Israel's right to exist.

It is safe to say that whenever hostilities break out in the region, the balance of news reporting is sympathetic to the Palestinian terrorists and hostile to Israel. These hostilities are usually the result of incursions into Israel by terrorists, resulting in the murder of innocent citizens, or rocket attacks intended to do the same.

History shows that western governments have hardly shown restraint themselves when faced with the same situation. It would appear that proportionate responses to unprovoked military assaults and terrorist attacks are only required by Israel.

When Hitler rained down his revenge weapons, the V1 'Doodlebugs' and V2 rockets, onto the civilian population of England, the Royal Airforce reduced the cities of Hamburg, Dresden and Cologne to rubble.

The response to the Libyan organised 1986 La Belle discotheque bombing in Berlin, in which two American servicemen were killed, was the bombing of Tripoli and Benghazi with some bombs hitting the civilian suburb of Bin Ashur. Hundreds were killed, including Hanna Qaddafi, the adopted daughter of Libya's dictator Mohamar Qaddafi

When Al-Qaeda flew three hijacked civilian aircraft into the World Trade Centre and the Pentagon, killing some three thousand civilians, the US Airforce rained hell down on Afghanistan and invaded the country. Tens of thousands of people were killed, including civilians. They continue to rain down hell to this day, using remotely controlled drones.

President Reagan's words after the Libya bombing apply to every nation but obviously not Israel.

"When our citizens are attacked anywhere in the world on the direct orders of hostile regimes, We will respond".

He argued that America was exercising its rights to self defence under Article 50 of the UN Charter. If that is the case then so are the Israelis but I digress.

The world should be under no illusions of what would happen should the Israelis comply with its critics and lay down their arms - Israel would indeed be erased from the face of the earth as promised and the Jews would be faced with another Holocaust.  Dwight Eisenhower, as Supreme Commander of the Allied Forces during World War II, instructed that video and photographic evidence be gathered of the German extermination camps because he knew that sometime in the future attempts would be made to re-write history and deny the Jewish Holocaust.

If Hamas, Hezbollah, Iran and its Ayatollahs, together with all the other medieval barbarians that inhabit that part of the world, get their way another Holocaust would be a racing certainty.

The Jews wouldn't submit themselves to annihilation a second time and would most likely seek exile once again and the ancient land of Israel would become the Jew free land of Palestine for the first time in history. With their objectives achieved the justification for Muslim terrorism around the world will be removed and peace should reign at long last.

Every so called 'progressive', every bleeding heart hand wringing liberal, every socialist with their faux compassion and false concern for justice, the Pope, the Archbishop of Canterbury and every Jew hating anti-semite would now be able to come down from their ivory towers and their sanctimonious moral high ground to celebrate their part in bringing peace to the middle east at last.

One would have to be totally deluded to think that the centuries old animosity would end with peace replacing war and people of different faiths living side by side with in perfect harmony. The news reels from the middle east showing images of mayhem, destruction and murder that are available on the Internet and social media should give some indication of what will happen next.

When Muslims proclaim that everyone must submit or be subservient to Islam, they actually mean it and fuelled by the religious fervor of victory they will set about doing the bidding of their prophet.

Once the Jewish holy sites have been desecrated and destroyed, the religion of peace will turn its attention to Christians and other faiths. Their holy sites, the Church of the Holy Sepulchre etc. will be destroyed and overbuilt as is traditional after a Muslim conquest.  Cordoba Cathedral in Spain, Higha Sofia in Istanbul, the Temple Mount in Jerusalem and the Hindu God Ram's birthplace in Ayodhya, India are classic examples of Muslim architectural triumphalism. 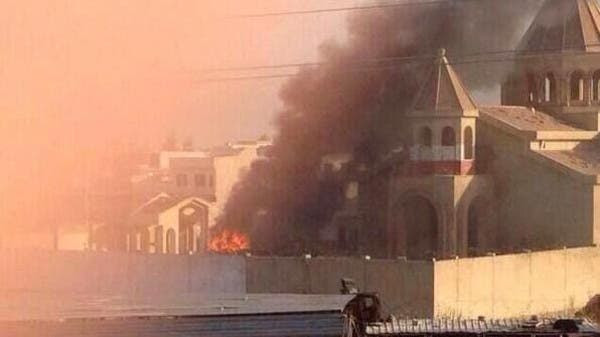 Violence, murder and rape against centuries old Christian communities in Iraq is being perpetrated by rampaging Muslims while the Christian leaders obsess themselves with women priests, gay marriage, inequality, social exclusion and all the other trendy left wing 'progressive' nonsense that should be the preserve of the temporal.
(See story here)

While the middle east is being cleared of infidels and kaffurs, the fifth columns in western countries will be awakened and activated to agitate in conjunction with battle hardened jihadis who have returned to cut off the hands that fed them and gave them sanctuary.

The British people, disarmed by their government and crippled by political correctness, will be threatened and intimidated into accepting Islam as an integral part of British life and they will be compelled to celebrate its festivals. Their own festivals and way of life will be deemed as offensive to Muslims and suppressed.

This can be dismissed as fanciful speculation but just a tertiary glance at some of the antics of the political class, together with their agents in the public institutions, will demonstrate the veracity of this scenario. Schools adapting their procedures and altering their holidays to accommodate Muslims, school children being forced to celebrate Muslim festivals, halal meat being made compulsory in supermarkets and stores. Employees refusing to handle pork products or alcohol are indulged and remain employed instead of being fired.

Hate preachers are allowed to spout their threatening anti-western filth unmolested by the same authorities that rigidly enforce political correctness for the indigenous people.

Other European countries have practically succumbed already with Belgium set to become the first majority Muslim country within a decade or so. The Scandinavian countries, particularly Sweden, are reeling under the weight of Muslim demands and criminality, which includes the rape of women and children.

The great Satan will still be there and the traditional Muslim hatred for America and its people will continue unabated. They can expect particular attention and with the help of their traitorous politicians, fundamental transformation will include acceptance of Islam as equal to Christianity with the celebration of Muslim festivals being made compulsory. There is hope in that the governments attempts to disarm the people have been unsuccessful so far.

Even the revered Pledge of Allegiance is being desecrated in schools with kids forced to say it Arabic with the name of God replaced with Allah.
(See the story here).

These are likely scenarios but if they only happen in part it will mean massive upheaval, disruption and murder in the once Christian dominated lands. It is only Israel that stands between us and the mayhem the Muslim communities have promised to bring down on our heads.

If the west had any sense and self respect, it would ignore the hand wringing bleeding hearts and their Jew hating fellow travellers and give Israel all the support it can muster in order to save themselves from a similar fate.