Known as the Compiegne or Foch Railcar, students of history will recognize it as the one Adolf Hitler used in an act of humiliation to house the signing of the French surrender during World War II. Its the same railcar that the French used to house the German surrender after World War I.
The French surrender in June 1940 saw the formation of Vichy France whereby a puppet government led by Marshal Petain and Pierre Laval, assisted by various other traitors and collaborators, was set up to rule on behalf of their German masters.

On November 1st 2014 the insidious Nice and Lisbon Treaties come into effect in Great Britain after which forty three crucial areas of legislative authority will be surrendered from the democratically elected representatives of the people to the unelected, unaccountable, unsackable bureaucrats of the EU.

and most notable, the ability for member states to withdraw from the Union.
(See full list and opinions here and here)

British politicians under the guise of various treaties have surrendered so much sovereignty already that seventy five percent of British laws come from the EU, reducing the Westminster Parliament to a rubber stamp. The surrendering of what remains will effectively end Great Britain's status as an independent sovereign state and with it over a thousand years of history.

It is undeniable that the current EU is dominated by Germany, assisted by a craven France and an unholy alliance of Great Britain's historical enemies. Anyone watching the proceedings of the EU cannot fail to notice the animosity and vitriol directed at some of Great Britain's representatives. This can be confirmed by the voting record which has read twenty six to zero against Great Britain in the past.

These historical enemies would like nothing more than to see a once great Britain reduced to a vassal state or a minor province paying tribute to a United States of Europe which is controlled by a German-French axis.

No nation that has over seventy five percent of its laws made by a foreign entity and who is about to surrender control of the forty three critical areas linked above, can call itself an independent, sovereign nation. It is, in effect, the death of the democratically governed nation state and the birth of a authoritarian tyranny governed by appointed bureaucrats.

This excersise in nation building has been well planned and built without the consent of the subject peoples. Consultation and referendums have been routinely denied and where they have been held due to constitutional requirements, unfavourable results have been ignored with the project progressing regardless.

The political class are well aware that the EU has been a complete and utter disaster for the British people with an ever increasing number wanting an exit. It was with this in mind that the then British Prime Minister, Gordon Brown, in an act of cowardice that wouldn't have been amiss in the railway car at Compiegne, sent his Foriegn Secretary, David Miliband, to sign the initial surrender document known as the Lisbon Treaty.

When he thought the heat had died down and the twenty four hour news cycle had moved on, Gordon Brown, who is renown for his cowardice in the face of adversity, snuck in to Brussels like a thief in the night to add his signature to the surrender document. 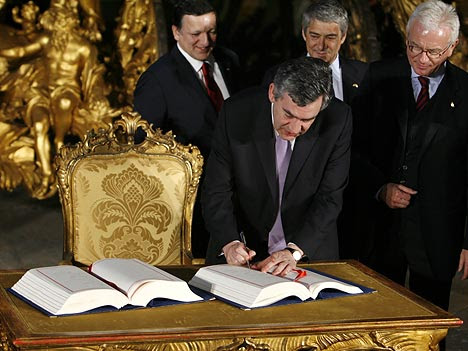 Too cowardly to take his seat, Prime Minister Gordon Brown signs the Lisbon Treaty surrender document in a broom cupboard somewhere in Brussels.

To borrow a phrase from President Franklin Roosevelt, November 2014 "is a date that will live in infamy" as it marks the end of Great Britain as an independent sovereign state and it brings to a close over a thousand years of history. This treachery was achieved by lies, deceit and without a shot being fired.

Footnote to this article: It is worth noting that after the liberation of France and the regaining of its status as an independent, sovereign nation, several official and unofficial purges of collaborators took place. Between 1948 and 1952 some six thousand collaborators were executed before liberation and some four thousand after.

One hundred and twenty thousand collaborators were prosecuted with one thousand five hundred death sentences handed down. The leader of the Vichy government Marshal Petain had his death sentence commuted by Charles De Gaulle. The Prime Minister Pierre Laval was not so fortunate, he was put up against a wall and shot.