When the veteran Labour MP Frank Dobson described his party leader Red Ed Miliband and his inner circle as "useless" his word applied to the entire political class both foreign and domestic. The rest of his opinion is even more revealing and indicates the patronising attitude of an increasingly arrogant elite. He continued by saying that Red Ed and his Shadow Cabinet are only capable of delivering post graduate lectures instead of simple policies the voters can understand.

There we have it, the public are too stupid to understand what the professional, career politician has in store for them and judging by election results he may have a point. Dobson's interview with the hopelessly left wing Guardian newspaper contains two pearls of wisdom which when applied to the current political scene explain a great deal.

In other words the government's deliberate dumbing down of the education system has been so successful that people have lost the ability to analyse information and form their own independent opinion. Their opinions can be formed for them by repeating slogans and sound bites over again ad nauseum until they are embedded in the subconscious.

Asked if Red Ed's inner circle are useless, Dobson agreed enthusiastically before clarifying that "not of sufficient quality and clarity" was a more accurate description.

When describing the current political class as 'not of sufficient quality' he hit the nail squarely on head.

The consequences of Dobson's observations are there for all to see - the people will believe practically anything they are told by a degraded political class, no matter how outrageous or ridiculous, if it has been repeated often enough.

Logic and empirical evidence are no competition for oft repeated official statements and propaganda especially when they are cascaded by a compliant bought-and paid-for agenda driven media.

There are countless numbers of detached, inexperienced people masquerading as politicians that are eminently unsuitable for high office, Red Ed being one, David Cameron being another, with the ultimate prize for unsuitability going to the community organizer, Barack Obama.

There is no one better to illustrate the points inadvertently raised by Frank Dobson, than US Secretary of State John Kerry with Israel and climate change as the propaganda driven issues.

Kerry may meet the criteria to be a U.S. Senator but in the eyes of the world he is totally unsuitable to be Secretary of State. His dubious war record, together with his Fonda-like trashing of his country, his accusations of war crimes against his brothers-in-arms and his socialist hypocrisy have rendered him untrustworthy and therefore ineffective.
(See one Kerry story here)

Being a modern day politician he uses propaganda, distortions, insults and soundbites as a matter of course and it doesn't take a genius to see through it and spot the agenda driven ideologue that lurks underneath.

Prior to the Ukraine and the Israel/Hamas crisis taking the front pages, Kerry was in Jakarta as part of an East Asian doomsday tour, warning the world that climate change is the greatest challenge of our generation. According to Kerry it is more dangerous than terrorism or the proliferation of weapons of mass destruction or even a nuclear armed Iran.

It may seem strange that such a world threatening issue hardly got a mention by the former Secretary of State, Hillary Clinton, who's priority seemed to be justifying her existence and raising her profile for a Presidential run.

Without a smidgen of empirical evidence Kerry warned that Indonesian fishing catches will reduce by forty percent, not thirty or fifty but forty. The recent farming problems in California are definitely caused by climate change as are the wildfires in Australia and Hurricane Sandy. According to a recent documentary all low lying areas, including Manhattan, will be under water in the not-to-distant future causing a global financial meltdown.
(Kerry on climate change here and here)

Being a Liberal or 'progressive' or whatever socialists are calling themselves these days in America, Kerry will be bound by an ideological pro-Palestinian terrorist/anti-Israel requirement and this is evident by his actions.

Despite the fact that Israel is defending itself from an unprovoked attack by ruthless terrorists who have a declared intention to erase Israel and the Jews from the face of the planet, Kerry continues to give Hamas succor and support while demanding concessions from Israel.

He has the compliant media on his side demonising Israel and the Jews to the point where violent anti-Semitism is on the rise, particularly in Europe. The government-media complex continues with the false narrative about stolen land and a Palestinian state when even minor research will reveal that Israel is the ancient homeland of the Jews and there never has been a Palestinian state let alone one with Jerusalem as its capital.

The John Kerry doomsday tour highlighting the greatest threat facing humanity has been largely forgotten as events in the real world interrupt the world of spin, lies and the global socialist agenda. How can a minor conflict in the middle east with a comparatively small loss of life call a halt to a mission to save the world from a catastrophe which could cost millions of lives?

Indulging in this carbon spewing shuttle diplomacy around the middle East and Europe is a pointless exercise if the lessons of his previous tour to East Asia are to be believed. One report has Israel suffering from water shortages and desertification due to climate change making vast areas uninhabitable.

Also Israel, being a low lying country with some areas below sea level, if the oceans are inexorably rising due to ongoing climate change then coastal Israel will be under water before too long making more areas uninhabitable and this war even more pointless.
(See story here) 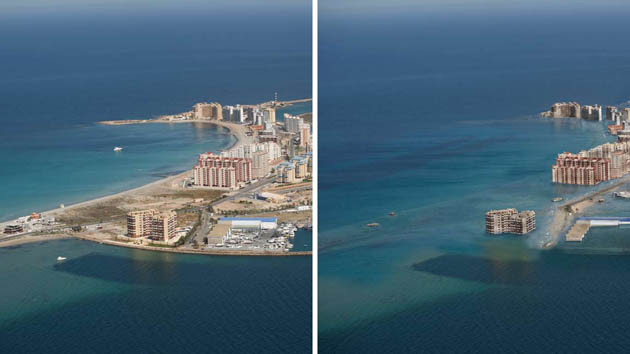 Hamas can put down their arms, stop killing their own children and stop trying to erase Israel from the face of earth.  If John Kerry is to be believed climate change will do the job that any number of their rockets have failed to do.