Death To America, Death To Israel - Relax They Don't Really Mean It

Exactly why Iranians were dancing in the streets of Tehran after the announcement of a nuclear deal is open to speculation. Some pundits claim it was to celebrate the lifting of sanctions, others the gifting of Iran with nuclear weapons thus giving them capability parity with Israel now that Obama has dumped them as an ally.

The official spin from the White House is that Obama's diplomacy has succeeded in curtailing Iran's nuclear ambitions preventing their acquisition of nuclear weapons and ending the possibility of a nuclear arms race in the middle east. In exchange international sanctions will be lifted and relations between Iran and the rest of world normalised.

As the politicians and diplomats pat themselves on the back and congratulate themselves for achieving the declared legacy of President Obama, the reality behind this appeasement and the reasons behind it are not too difficult to fathom.

The reality is that although sanctions have restricted Iran's ability to cause death and mayhem it remains the biggest sponsor of terrorism in the region and the wider world. Terrorist organisations such as Hamas, Hezbollah, ISIS, al Qaeda, al Shabaab and the Taliban have become household names because of their bloodletting and they have all benefited from Iranian money and logistical support.

There has been no requirement in this deal to curtail their global support for Islamic terrorism - not that they would honour them if there were any - therefore an additional one hundred billion dollars into their war chest can only mean more mayhem and death across the world in the name of Allah the Merciful.

The reason for this is simple, The Islamic Republic of Iran is a revolutionary theocracy run by Islamic fanatics where Israel and the Jewish people, America and the American people are the focus of their visceral hatred.

If their fanaticism is in any doubt, it is worth remembering that their last leader, Mahmoud Ahmadinejad articulated his version of the national beliefs. Iranians are waiting for the return of the Hidden Imam or Mahdi, who will set up and rule over the Caliphate. In the meantime, until he returns, Ayatollah Ali Khamenei is ruling in his absence.

Apparently there is documentary proof that his return is being hindered by the USA in order to prevent him ruling the world. The destruction of America therefore will hasten the Mahdi's homecoming and the setting up of the promised Caliphate.

No one really knows how many ordinary Iranians buy into this nonsense, suffice to say that the ruling theocracy does and they have widespread support.

With beliefs like this, combined with their record of lying and breaking treaties, and in addition to supporting Islamic terrorism around the world, who in their right mind would facilitate their acquisition of nuclear weapons?

Not Israel that's for sure. These are the experts, they live cheek by jowl with these fanatical killers. Every single day of their lives is lived under the threat of Iranian sponsored terrorism.

The Israelis have warned the world over again that if ever these maniacs succeed in wiping Israel and every Jew off the face of the earth they will not stop there. They will continue the killing and mayhem until the commands of Mohammad as laid down in the Koran are fulfilled.

The world must submit to Islam and live by shariah law. All infidels and khafirs must convert or pay an infidel tax and become slaves of Islam. Failing that they must all be beheaded.

This perverted ideology is being preached in mosques and madrassas not only in Muslim countries but with impunity across the civilised world. Hate preachers such as Great Britain's notorious Anjem Choudary preach this hatred on the streets of Great Britain without fear of arrest; he has even been given air time in the USA.

In addition to the history of Iran's hatred of America and Israel, the chanting of Death to America and Death to Israel by huge crowds during the nuclear weapons negotiations should have given the administration a clue that the Iranians will not stick to any deal.

Their hatred of both America and Israel, stoked up by religious fanaticism, and combined with the belief that they are within touching distance of acquiring the means of fulfilling their scripture, prevents them from negotiating in good faith.

So why is the Obama administration falling for this?

If anyone is in any doubt that President Obama is a hard line socialist/progressive ideologue then they have not been paying attention for the last seven years; every word and deed of his confirms this. He has surrounded himself with like minded ideologues and useful idiots.

The tenets of socialist/progressive ideology demand that all adherents must hate capitalism, America and Israel; Obama along with his administration and supporters have made it plain during his presidency that they comply with all three.

They believe that capitalism, America and Israel are forces of evil in the world and the prime cause of all its problems. This is further complicated by Obama's statements in support of Islam and his war against Christianity at home.

Obama's ideology has manifested itself in his deliberate downgrading of America and reducing its dominance on the world stage. His actions are typical of the socialist/progressive administrations that have bankrupted and ruined almost every country in Europe. In addition to this, and to help America finally disappear down the pan, he is eviscerating the mighty military machine that kept the world's ambitious dictators in check.

This has not gone unnoticed in Moscow, Beijing and Tehran who have become emboldened and increasingly brazen in their expansionist designs.

While the obsession with sexual orientation and gender proclivities is turning America's military into a global laughing stock, Russia is expanding westward and encroaching on Americas borders with its bombers and submarines while the Chinese are expanding in the South China Sea and indulging in a cyber war against American industry and its public institutions.

While America is obsessing about gays in the military, its new nuclear capable client in the middle east is publicly lynching them by crane in Tehran Square. 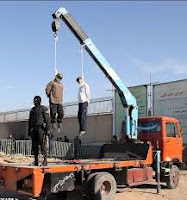 While America is putting pressure on the only democracy in the middle east and putting its very existence in peril, the Ayatollahs are causing bloodshed and death while they expand across the middle east with impunity.

In conclusion; with the acquisition of nuclear weapons by Iran within reach, Israel is now the front line of defence and the last redoubt against radical Islam, we ignore them at our peril.