It wasn't long ago in historical terms that the Founding Fathers of America wrote these immortal words on a piece of parchment before signing the Declaration of Independence:

"And for the support of this declaration, with firm Reliance on the protection of divine Providence, we mutually pledge to each other our Lives, our Fortunes, and our sacred Honor"

The rise of America to be the greatest and most prosperous nation on earth in just two hundred and one years is a testament to the farsightedness of these great men.

The decline of America into its present state began in earnest with the Carter administration in 1977 when American exceptionalism was put into question and its reputation for spreading its good fortune abroad began to be portrayed as arrogance and even imperialism.

The enemies of freedom outside America who worked tirelessly to counter its efforts to spread liberty abroad were now being supplemented by enemies within who were equally determined to degrade America and its influence.

As the American people are finding out to their cost, while they enjoyed the blessing of liberty guaranteed them in their Constitution, these same enemies within have been burrowing away beneath the surface slowly but surely chipping away at the bedrock of their great country.

As a demonstration of how confident the enemies within have become they are erasing the very history that was instrumental in constructing the greatness of America.

The history of all countries has its dark moments and America is no different; the majority of the good people of America regardless of race and creed acknowledge this and concede. These historical wrongs have long been put right and the opportunity offered by the American dream is available to all that desire it and are prepared to chase it.

American history and traditions are now under threat with everything from innocent television programs to the names of sport teams being censored or erased.

To end on a positive note, let the enemies within burn the flag and continue their war on America.....but only for today.Tomorrow the fightback should begin.

Today patriots should honor their Founding Fathers by pledging again 'to each other their Lives, their Fortunes and their sacred Honor' then celebrate the birth of their great nation with pride and fireworks but without guilt. Enjoy the day but start preparing tomorrow for the battle ahead.

This new battle for independence will not be against a demented British King and his colonial army, but a nameless, faceless enemy dwelling in your midst with malice aforethought.

To the American people, stand tall, America will prevail, have a great day and best wishes from myself and my fellow countrymen. 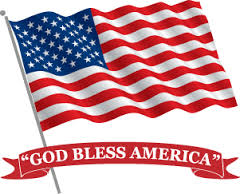 Posted by Daniel Thomas at 6:42 AM