Although the Greek 'No' referendum result is welcome among those freedom loving people across Europe who want to see the anti-democratic European Union tyranny consigned to the dustbin of history, it doesn't excuse the shameful behavior of the Greek people and their criminal political leaders.

Greek philosopher and mathematician Pythagoras dates from 571 BC,  his legacy and theorem are with us to this day. The same can be said of Aristotle who blessed us with his genius from 384 BC, Euclid from 300 BC and Archimedes from 287 BC. Democritus gave us his atomic theory of the universe back in in 460 BC.

Looking at the situation in Greece today it's difficult to comprehend that the children of Pythagoras, Aristotle et al, are unable to grasp the simplest of concepts. 'When a nation spends more than it earns, it racks up debt, when that debt becomes unsustainable the country goes bankrupt'. What could possibly be simpler?

For reasons that defy logic the Greek people ignored the legacy of Pythagoras and allowed themselves to be seduced by three generations of the left wing Papandreou family who formed and controlled the Panhellenic Socialist  Movement known to the world as PASOK.

Georgios Papandreou started the spendthrift ball rolling back in the 1960's; this was continued by his son Andreas reaching a disastrous grand finale with his American born grandson Georgios Junior, known as George. Regardless of the arithmetic George went on to spent Greece into bankruptcy.

This culminated in a bloodless coup by EU bureaucrats who suspended Greek democracy, ousted him from power and installed their own troika of unelected technocrats.

One can possibly be forgiven for thinking that the promise of 'free stuff' paid for by someone else had a numbing effect on the collective Greek mind but it's stretching credulity too far by suggesting that George Papandreou, and subsequent Greek politicians, were unaware that they were spending Greece into bankruptcy.

Being a student of the London School of Economics and Harvard University, Papandreou must have known that he was bankrupting Greece and sentencing his own people to perdition for generations to come. Had this been an individual or a business it would be a criminal act with the perpetrators punished accordingly but as we know, politicians are above the law and they take care of their own. 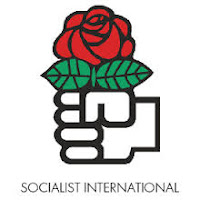 Papandreou is also the leader of Socialist International, an organisation of global socialists who are dedicated to imposing the same disastrous policies that ruined Greece onto all countries around the world. Instead of a conviction and a prison sentence for the millions of lives he has destroyed, Papandreou is feted among the global elite as some kind of elder statesman and given appointments lecturing at prestigious educational establishments such as Harvard University and the School of Public Affairs, Columbia University, New York.

This modern Greek tragedy should serve as lesson to those nations that are being seduced by government propaganda that politicians can mandate equality of outcome and give away lots of 'free stuff' by simply redistributing wealth via taxing the so called 'rich' then when they run out of other peoples money, borrowing more from abroad.

The mathematical principles passed down by Pythagoras, Aristotle Euclid and their historical counterparts are eternal verities which are as applicable today as they have always been and people should not be seduced into thinking otherwise.

In case the theories of the ancient mathematicians are too difficult for the the politicians and the Greek people to understand I consider it my public duty to help.

There is no such thing as 'free stuff', be it health care, education, early retirement, food stamps, welfare benefits or anything else; it all has to be paid for by someone. If it's borrowed money it will have to be paid back with interest. Living within one's means is morally right for individuals, businesses and governments alike. Expecting others to pick up the tab for an unaffordable lifestyle is parasitic and shameful in the extreme.