With Donald Trump leading the race to challenge Hillary Clinton for the Presidency of the United States it's becoming a nightmare for the political establishment and the UN based global elite that currently wield power in Washington DC.

Being financially independent of the lobbyists and the powerful, agenda driven political operatives that are 'fundamentally transforming' America, Trump is an anti-establishment conservative and cannot be bought. He is outside of their sphere of influence and this puts their long planned 'progressive' agenda under threat.

Unbeknownst to many, a career politician by the name of Jeremy Corbyn is leading a similar race across the pond for the right to challenge David Cameron, or his successor, for the Premiership of Great Britain.

Unlike the nightmares being suffered by the establishment and the power brokers in America, their counterparts in Great Britain are dreaming blissfully in their beds at night, safe in knowledge that whoever wins this election their 'progressive' agenda will be in safe hands.

Despite the fact that both Donald Trump and Jeremy Corbyn are topping the polls in their respective elections, their background and policies couldn't be more different and this speaks volumes about the current political class.

Modern politicians consist mainly of unprincipled, self serving career charlatans who have sold their souls to agenda driven power brokers and who have reduced political discourse to a series of soundbites and slogans. These are carefully constructed by PR men, advertising executives and image consultants who choreograph their charges to perform before a controlled media like seals in a circus.

These two elections are raising several important issues that highlight not only the hypocrisy and mendacity of the modern political class but also their treachery. Their willingness to ignore the wishes of the people and put the ideological agenda of the 'progressive' global elite before their safety and economic well- being has resulted in frustration and a hunger for change.

The explosion onto the political scene of both Trump and Corbyn is representative of that hunger and welcome as it may be, it is not without its danger.

While Donald Trump has used the opportunity offered by individual liberty and free enterprise in America to build a myriad of businesses and create tens of thousands of jobs, Jeremy Corbyn has ignored the lessons of history and spent his life promoting a failed ideology that has resulted in poverty, misery and death to millions of people across the world.

In his crusade to impose a socialist system on the British people, Corbyn tells it to them straight without spin or the use of PR executives, media mangers or image consultants. He comes across as a genuine man of the people and this has resonated with the supporters of the Labour Party who are leaderless after the resignation of their institutionally Marxist former leader, Red Ed Miliband.

As an indication of how politically illiterate these Labour supporters are, Red Ed Miliband lost the last election because the majority of the British electorate rejected his message on account it was too left wing.

He was called Red Ed for a reason. 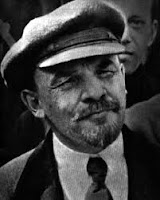 Their response to this defeat is to nominate a leader who is further to left than Miliband, an ideologue who has more in common with Lenin than their three time election winner Tony Blair.

Corbyn is the archetypal hard left, self loathing socialist who espouses all the usual anti-British, anti-western causes that undermine global prosperity and civilisation itself.

It goes without saying that Donald Trump loves his country with a passion but the same cannot be said of Jeremy Corbyn.

If any person or organisation hates Great Britain then Corbyn is their friend. Without any thought for their victims; those people and organisations include the leaders of Hezbollah, Hamas, the IRA and the multitude of Palestinian terrorist gangs.

Like all those who dwell in the communist/socialist/progressive community, Corbyn thrives on poverty, misery and envy. The unifying factor within this community is hate, they love to hate, it's their element, they thrive on it and Corbyn is no different.

It's difficult to confirm what he hates the most; Israel and the Jews, America, individual liberty or capitalism and prosperity. He certainly hates the 'rich' who he believes are evil exploiters of the poor and who should be stripped of their wealth for redistribution. I would hazard a guess that he has an extra piece of hate in his heart for Donald Trump for no other reason than his wealth.

Corbyn was a friend and supporter of the blood soaked Venezuelan despot Hugo Chavez but has had nothing to say about the poverty and misery being endured of late by the Venezuelan people as a result of the same socialist policies he wants impose to on the British people.

Like every socialist from North Korea to Greece, Corbyn is incapable of understanding that their economically illiterate policies always end with bankruptcy, poverty, misery and, as the Greek people are finding out, authoritarianism.

In resource rich Venezuela, the supermarket shelves are empty of everything from toilet paper and condoms to food. In age old socialist fashion, the current economic genius, President Nicolas Maduro, has ordered - ordered please note - farmers and the food industry to distribute between thirty and one hundred percent of their produce to the network of state run supermarkets amid a shortage of basic foodstuffs. 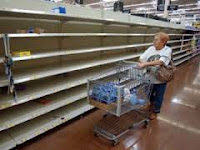 The fact that Donald Trump is ahead in the Republican primary and Jeremy Corbyn is ahead in the Labour Party race is confirmation that the people are waking up to the contempt with which they are held by the current political establishment who are prepared to let their own people be raped, robbed and murdered rather than enforce the law.

The American people are fortunate in that Donald Trump would make an effective President, certainly better than Hillary Clinton or Jeb Bush, and most definitely better than Obama ever was, the British people are not so fortunate.

In their desperation for a real human candidate, as opposed to the usual establishment controlled automaton, they would elect an abomination like Jeremy Corbyn and end up in poverty and misery like the unfortunate victims of socialism in Greece and Venezuela.

Posted by Daniel Thomas at 2:39 PM