Ignoring The People - Europhile Theresa May Refuses To Initiate Brexit 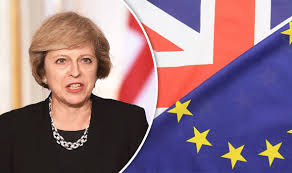 Looking at the way the modern political class routinely ignores the will of the people and treats their hopes and aspirations with complete and utter contempt, it is beyond all doubt that the world has entered the post-democratic age.

The global elite are embarked on a great crusade to replace national sovereignty with a single world government which uses the Marxian philosophy of total equality applied to nations as well as their citizens.

The European Union is an essential part of this crusade whereby the sovereignty of twenty-seven nations has been transferred from elected Parliaments and legislatures to a Commission run by appointed bureaucrats.

The political elites across Europe have sworn fealty to the EU project and many have dedicated their entire lives to bringing about the United States of Europe.

One such dedicated Europhile and globalist is the new British Prime Minister, Theresa May, who replaced her Europhile boss, the disgraced and thoroughly despicable David Cameron.

It was EU fanatic Cameron, with Mrs. May's approval and support, who led the campaign to deceive the British people into believing that Great Britain's exit from the EU would trigger an apocalyptic nightmare which would result in every conceivable disaster from poverty, war, famine and catastrophic climate change to the end of health care provision.

Judging by her actions since she took over the Premiership Mrs. May is either having serious problems abandoning her life-long belief in the EU project or she is maneuvering to keep Great Britain firmly attached in some shape or form to the superstate.

Contrary to the apocalyptic predictions of Project Fear and the threats of retribution by global institutions such as the UN, the IMF and President Obama, all the indications are that the post-Brexit future is bright for the British people with economic indicators breaking all records and nations lining up to sign trade deals.

Prime Minister May's actions since the referendum and her absolute refusal to initiate the two year long Brexit process bodes ill for the British people and puts into question whether she will listen to the people and honour the referendum result by taking Great Britain out of the EU.

Despite the overwhelming referendum victory for Brexit, Mrs. May's first Cabinet consists of eighteen Europhiles and only four (4) Brexit supporters. Her first announcement on taking office was that the Brexit process would not be initiated anytime soon.

Her first meeting was with the fanatical Europhile leader of Scottish Nationalists, Nicola Sturgeon, who came away from that meeting under the impression she had a veto over Brexit.

Her second meeting was with the increasingly unstable Chancellor of Germany, Angela Merkel, the megalomaniac Europhile who is on a one woman crusade to destroy Europe and it's cultures not unlike a previous German Chancellor from the recent past.

The maniacal Chancellor came away from that meeting telling Mrs.May that Great Britain must continue with open border mass immigration even if they leave the EU.

At time of writing Mrs. May has had no meetings with anyone from the Brexit campaign and the four Brexit ministers in her Cabinet have been ominously silent.

Despite ever stricter censorship, the truth is that due to incompetent governance and the continuing tsunami of job killing regulations, the economies of the Eurozone have collapsed into bankruptcy with the people mired in poverty, unemployment and destitution.

Due to uncontrolled mass immigration European cities are on fire with violent clashes taking place on a continuing basis. Rape, violent crime and murder are now everyday occurrences not to mention the influx of terrorists from the Muslim world committing mass murder when the opportunity arises.

The EU project and its much vaunted single market is dead, it is over, it is finished and no amount of remedial action by the Eurocrats and the global elite can save it. It is past time that Mrs. May and the Europhiles accept this and get Great Britain out at the earliest possible opportunity.

Delaying Brexit serves no purpose and only emboldens the Eurocrats in Brussels to make more threats of retribution and to make extraction more complex and difficult.

By not initiating the Brexit process the British taxpayer remains committed to paying fifty-five million British Pounds per day to the corrupt EU coffers, open border mass immigration continues unabated and the deluge of job killing regulations keeps rolling in like a spring tide.

Since the referendum result some fifty days ago on the 23rd June the British taxpayer has handed over circa 2 billion British Pounds to the unaccountable corruptocrats in Brussels, every penny of which has been borrowed. EU bureaucrats are also demanding a payment of twenty billion pounds as a price for leaving. (See here)

The uncertainty created by Mrs. May's prevarication causes uncertainty which will put future trade deals in jeopardy which in turn threatens the British people's progress toward increased prosperity in the wider world outside the EU.

The same uncertainty also emboldens the Eurocrats who are issuing threats to make life difficult for the British people as an example to other countries who are contemplating leaving and for having the temerity of wanting to govern themselves. (See here)

Failure to trigger the process is also allowing the overwhelmingly Europhile Parliament and institutions to continue their efforts to mobilise their forces to prevent Brexit or call for a second referendum. Led by the taxpayer funded BBC, Project Fear has continued its propaganda campaign blaming every negative story on the Brexit vote.
(See here)

One of Mrs. May's closest allies and fellow Europhile, Phillip Hammond, is claiming that the Brexit process could take up to six years, three times longer than expected.

They justify this by claiming that Great Britain must negotiate a good deal for the UK which includes access to the much vaunted single market and this will take time. The truth is that the EU and the bankrupt, poverty stricken countries that make up the single market are a dead horse that should have been confined to the knackers yard when member states required multi-billion dollar bail outs from the IMF and other bankrupt Eurozone countries.

Great Britain does not need the EU or its single market to prosper in the wider world outside of the failed EU. Prime Minister May holds all the political and economic leverage she needs to just walk away from this disaster unscathed but more importantly she has a mandate from the British people which she is duty bound to fulfill.

Prime Minister May, listen to the British people and do what is right, the game is up, the EU project is finished, let it go, and initiate the Brexit process without further delay.