Draining The Swamp Part II - A Task Too Far For A Trump Presidency? 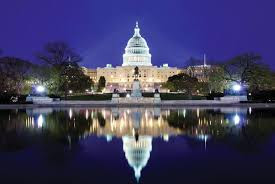 It is now accepted as fact that the United States of America that was envisaged and created by the Founding Fathers has disappeared into a fetid swamp of corruption and with it the American Dream of life, liberty and the pursuit of happiness.

It was this dream that attracted millions of immigrants from Europe to make the treacherous journey across the Atlantic Ocean and it also facilitated the rise of America to become the greatest most prosperous nation in history.

To fulfill the ambitions of its founders any system of government no matter how pure requires honest, God fearing citizens motivated by patriotism and public service and committed to the well being of the country and its people.

Since the fall of Adam and Eve human nature itself dictates that a government made up entirely of such people is impossible therefore the descent of America into the swamp of corruption began with the signing of the Constitution in 1787. What made the United States so successful for so long was the fact that honest, God fearing people in power significantly outnumbered the self serving corruptocrats and were thus able to nullify their malignant intent.

As the decades rolled by the number of malignant corruptocrats increased to the point where they outnumbered the good people and went on to usurp political power.

Despite the oaths and affirmations that are sworn, corruption in America today is all pervasive and has infected Federal, State and local governments, including the Executive, Judicial and Legislative branches and most of the respective political offices and agencies.

These self serving politicians and office holders have ceased to represent their constituents, preferring instead to prostitute themselves to the lobbyists, powerful special interests and ideological soulmates.

This descent into the fetid swamp of corruption has resulted in the 'fundamental transformation' of America into something resembling a mediocre, third world banana republic which is destroying the middle class and further impoverishing the less well off. The deliberate increase in dependency and the expansion of the entitlement class is destroying the work ethic that is essential for wealth creation and prosperity.

Hillary Clinton and her criminal cartel epitomizes the corruption that is destroying America and the American Dream therefore she is unlikely to do anything to address it. On the contrary, Hillary Clinton will perpetuate the culture of sleaze and graft because it suits her self serving purpose to do so.

The question for the voters is whether Republican candidate, Donald Trump, will be able to accumulate enough power to take on and defeat the powerful vested interests, drain the swamp and then go on to restore that shining city on a hill and along with the fortunes of America and the future safety and prosperity of the American people.

In an attempt to muck out the stables Donald Trump has proposed a five point plan for ethics reform which may not be enough to curtail the influence of lobbyists or the special interests. It is a start and better than nothing at all, but it underestimates the scope and size of the problem and does little to deal with rampant corruption at State and local level. (See the plan here)

However this plan combined with his contract with the American voter for his first one hundred days in office strikes a more optimistic note. This contains a further six points to deal with corruption, seven actions to deal with the unbalanced trade deals and five actions to be instituted on his first day in office to deal with security and a return to constitutional law.

The contract with the American voter concludes with a further ten points covering a broader range of legislation that deals with Obamacare, illegal immigration, tax reform and much more. (Read the contract here)

Voters will have to decide if Donald Trump is genuine and serious about draining the swamp and making America great again. To that end the following points should be taken into consideration:

Donald Trump is not a bought-and-paid-for politician and therefore detached from the stench and corruption that pervades in the Washington DC swamp.

He is a seventy year old multi-billionaire businessman, a successful real estate mogul and an equally successful reality television producer. Mr. Trump credits his success to America and its system of individual liberty and free enterprise that allows businesses to develop and grow and the resultant prosperity to flourish.

Donald Trump has indicated that he has been blessed by America and now has a desire to give something back by cleaning up Washington DC and helping make available the opportunities afforded to him to future generations.

His decision to forgo retirement and the enjoyment of his billions to subject himself and his family to the most vicious campaign of abuse and smear ever witnessed in a Presidential campaign is a testament to his dedication to cause on behalf of all American citizens.

This election is the American people's last chance to rescue their country from corruption and the inevitable oblivion that will surely follow and return it to the wholesome greatness envisaged by the Founding Fathers.

Compared with the prospect of continuing corruption under a Clinton administration and a subsequent descent into third world poverty, misery and inter-communal violence, the Trump plan is at least a positive attempt to return power to it's rightful owners i.e. The American people.