Appointed And Unveiled - The New Dictators Of Europe 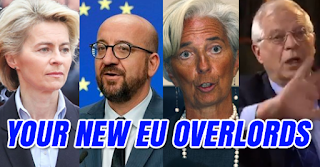 Without a single popular vote being cast, these are the people who will govern over five hundred million people.

These are the people who cannot be removed by popular ballot no matter how destructive they are to the safety, security and well-being of the people.

These are the people who are committed to the destruction of the ancient nation states of Europe and replacing them with a single, centrally controlled socialist state.

These are the people the British Parliament and the political establishment want to surrender the peoples' sovereignty to.

These people, along with their predecessors, are the reason the British people voted to leave the corrupt and dictatorial European Union and become the self-governing, sovereign nation that millions died for.

These people are despots who hold absolute power over twenty-eight nation states of Europe. They will do everything in their power to overturn the result of the Brexit referendum and prevent the British people from leaving their dictatorship to decide their own destiny.


Read about them here

Posted by Daniel Thomas at 6:43 AM