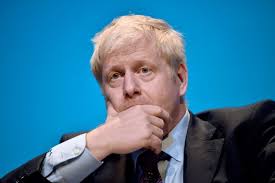 Judging by his announcements since he became the Prime Minister of Great Britain Boris Johnson has no more idea about the hopes and aspirations of the British people than his predecessor, Theresa May.

No bumbling bonhomie can disguise the fact that Johnson is just another politician who believes that the ruling elite know best and the wishes of the people can be ignored the instant they get their hands on the levers of power.

His predecessor, Theresa May, deservedly earned the opprobrium of the nation after she attempted to keep Great Britain locked inside the European Union with her phony Withdrawal Agreement. The now infamous surrender document.

With his announcement yesterday that he may keep Great Britain inside the EU customs union and the single market while he negotiates a deal, he is continuing where the hideous Mrs. May left off.

We've heard about two-year transition periods from Mrs. May and thanks but no thanks, we don't want one.

Johnson knows what we all know; remaining in the customs union and the single market means remaining in the European Union and therefore subject to its laws. It also means continuing to hand over large sums of taxpayer’s money and leaving control over our borders and fishing grounds in the hands of the bureaucrats in Brussels.

It means we cannot implement the trade deals that have been offered by the worlds biggest economies and trading nations. This includes the USA, China, Japan, South Korea and the Commonwealth nations we so callously abandoned in order to join the then Common Market in 1973.

It also means that the free movement of people will continue for another two years and with over 300,000 arriving annually that’s a city the size of Glasgow to be housed and provided for before we take back control.

Johnson and his Chancellor of the Exchequer, Sajid Javid, are either politically naïve, supremely arrogant or treating the people with contempt when they announce policies that put the demands of supranational entities before those of the people they are supposedly representing.

Giving amnesty to 500,000 illegal immigrants may go down well with the globalists of the United Nations and it may serve to burnish their multi-cultural credentials in New York and Brussels, but it is guaranteed to piss off the people at home.

Likewise, the announcement by Sajid Javid that he will continue to import tens of thousands of refugees annually regardless of cost, social provision or community cohesion, is contemptuous of the feelings and wishes of the British people.

With the breakdown of law and order rape, murder and child grooming are rife; London and the other big cities are beginning to resemble the backward third world countries from which many of the incomers fled.

In June 2016, after forty years of watching helplessly as the political elite surrendered their sovereignty to the unelected bureaucrats in Brussels, the British people voted to reclaim their birthright and become the independent, sovereign nation their ancestors died for.

It was not an advisory referendum; it was an order from the people to get us out of the corrupt and failing EU.

The political class are steeped in Euro-Federalism and therefore they are dedicated to the borderless, centrally controlled United States of Europe. They just cannot envisage Great Britain outside of their beloved Union.

To that end they have done everything in their power to overturn the referendum result and keep the British people enslaved in the bureaucratic nightmare.

To remind Johnson and his government in the simplest of terms,  some of the issues about which the British people care the most:

They want an end to open border mass immigration and imposed multi-culturalism.

They want to stop surrendering control over their laws, money, borders and fishing grounds to the unelected bureaucrats of the European Union. (i.e. they want to leave the EU)

They want an end to the continued influx of refugees when there is a shortage of housing, school places, money, health care provision and compounded by a breakdown in law and order.

This issue is especially annoying when the oil rich states of the middle east have the money, the space and the facilities but refuse to take any refugees whatsoever.

They want an end to wasting ever increasing sums of money on foreign aid to dictators and frivolous causes abroad when there is a desperate shortage of money for investment at home.

They want to stop wasting billions of taxpayer's money on a futile attempt to alter the climate by the end of the century. They want an end to the nonsense about a climate emergency, there isn’t one.

If there was there’s nothing on this tiny island we can do to stop it.

They want and end to the curtailment of their ancient freedoms by the imposition of rigidly policed political correctness. This includes freedom of speech and the right to form opinions and speak about them openly without fear of arrest by zealous, agenda driven police officers.

I will conclude by saying that the British people demand that we leave the corrupt and failing European Union and all its institutions absolutely and entirely on October 31st, 2019.

That means no extensions, no transition periods and no handing over of large sums of money that are not due.

I wish Boris Johnson the very best and I sincerely hope that he can keep the solemn promises that he has made. Unfortunately, we have heard these promises before only to be let down time and again by a political class that has its own agenda.

History will not judge him well if he fails to deliver and he will join Theresa ‘the Appeaser’ May in the dustbin of history.