She Hates Great Britain But Won't Leave As Promised 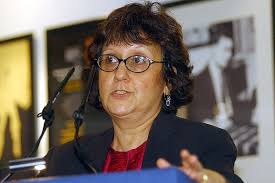 If customers in a restaurant or bar were being abused by a hostile clientele one would expect them to leave and find a more convivial establishment therefore the assertion by President Trump that those who hate America are free to leave makes perfect sense.

Intercontinental travel is now accessible to all but the destitute and many countries around the world are increasingly open to migrants so there is no logical reason why anyone would remain in a country led by someone they disapprove of and who's citizens enjoy a way of life they find offensive.

I enjoy looking back to those heady days in 2016 when celebrities and left-wing activists were lining up around the block to announce their departure for pastures new if candidate Donald Trump should win the Presidency.

As I recall, motor mouth actress and supposedly funny comedienne, Whoopie Goldberg, was particularly vocal about leaving as was fellow Hollywood whacko Barbara Streisand. Actor Samuel L. Jackson planned to leave for South Africa while what’s left of the surgically depleted Cher planned to go to another planet.

Across the pond in Great Britain similar sentiments are being voiced should Boris Johnson win the race to succeed the disastrous Theresa May.

Most vocal about leaving in the event of a Johnson victory is one of Great Britain’s most odious and universally despised ingrates, Yasmin Alibhai-Brown.

Since she arrived in Great Britain this obnoxious, anti-white racist has done nothing but slander and revile the British people who gave her succor and opportunities that would have been impossible in her native Uganda.

She came to Great Britain voluntarily and taking full advantage of her ethnic minority status she has made herself a lucrative career as an author and journalist slagging off the British people at every opportunity and in the most disgusting terms.

Also, by taking advantage of her ethnic minority status she is a frequent guest of the BBC and other anti-British, politically correct mainstream media outlets who give her a platform to air her racist views.

Her visceral hatred of white British people can best be illustrated by a comment she made on Channel 4 News when asked what she thought of white people, “I don’t like them. I want them to be a lost species in a hundred years" she said. (See here)

If that’s not bad enough, in a newspaper article she uses words such as ‘stupid’, ‘vicious’ and ‘scum’ to describe the white British working class who gave her sanctuary. (See here)

Due to her ethnicity, and a two-tier criminal justice system biased in her favour, Alibhai-Brown is a protected species as opposed to a lost species and she takes full advantage of it to promulgate her racist hatred.

As the indigenous British people know to their cost, such sentiments voiced by a white person about Alibai-Brown would land them in a court of law and most likely a prison sentence.

The hatred is mutual and social media is awash with people volunteering to buy her a ticket, help her pack her bags and give her a ride to the airport.

Why Yasmin Alibhai-Brown, Whoopie Goldberg and the rest of the ingrates remain in the countries they hate so much is a question for them to answer especially as Donald Trump is now President of the United States and Boris Johnson is the British Prime Minister.


Celebrities For Socialism - Barbra Streisand To Join The Exodus