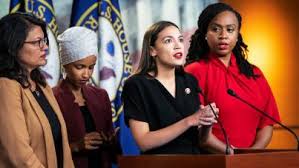 President Trump’s ability to fire up his supporters and attract new ones by saying in public what all sensible Americans think in private will go down in annals of political campaigning.

By deliberately creating a media frenzy with a couple of Tweets, President Trump has not only consigned the Democratic Primary candidates into temporary obscurity, he has successfully triggered the demented left and the mainstream media into exposing the utter lunacy of the America hating, anti-Semitic communists who are challenging the leadership of the Democrat Party.

President Trump’s statement is totally reasonable and makes perfect sense; if these ingrates hate America so much why don’t they leave? He also suggested they fix their countries of origin or allegiance then come back and enlighten the world how they did it.

This applies especially to the ingrate, Ilhan Omar, who represents the Minnesota 5th District in the House of Representatives. Fleeing her native Somalia, this vile anti-Semite was rescued from a Kenyan refugee camp and given sanctuary in America where she enjoys the same freedoms and constitutional rights as any other American citizen.

She has repaid her debt to the American people with a torrent of anti-American rhetoric and abuse including belittling the victims of the 9/11 terrorist attack on the World Trade Centre. She claims she felt safer in the Kenyan refugee camp than in America which makes President Trump's offer even more relevant.

The other three members of the self-appointed ‘squad’ that are now the vanguard of the Democrat Party, as well as being the mainstream media darlings, are Rashida Tlaib, Alexandria Ocasio-Cortez, and Ayanna Pressley.

Apart from being America hating communists and vile anti-Semites, all four of these goons are ignorant of history and laughably dumb. Anyone with an Intelligence Quotient higher than their shoe size should never tire of watching these ignoramuses make complete fools of themselves with their eccentric behavior and wild rhetoric. (See here)

This quartet of immature militants are too dumb to realize that the detention facilities at the southern border that they compare with Nazi concentration camps were put in place by their hero, Barack Obama.

The Tweets by President Trump have split the Democratic Party forcing the old guard led by Speaker Nancy Pelosi to either accept that the party is now a fully-fledged socialist movement or start a civil war with the new upstarts in Congress.

President Trump has also set the narrative for his election rally in North Carolina which is another indication that he knows exactly what he is doing and playing the media like a fiddle.

To conclude: across the pond in Merry England there is a similar issue with ingrates who have been given sanctuary and economic opportunities that they would never have achieved in their native countries demanding that their hosts change their ancient culture and way of life because it offends them.

Without the diplomacy of President Trump, the hosts have adopted, in the form of physical and online graffiti, the Fit In Or F*ck Off meme.