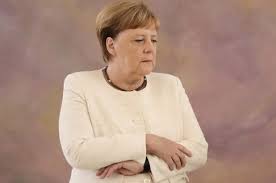 It has long been the opinion among Merkel watchers that the German Chancellor is mentally unstable with a tendency toward megalomania. A communist party apparatchik and collaborator with the Soviet rulers of East Germany, Angela Merkel, displays all the characteristics of someone addicted to absolute power.

Her fanatical dedication to the domination of Europe using the European Union regardless of the disastrous consequences for the lives of the subject people indicates someone totally lacking in empathy combined with an unhealthy sense of entitlement and personal destiny.

It’s not so much her uncontrollable shaking while trying to stand still during a ceremony with the Ukrainian President that gives cause for concern but her dismissal of it as a mild case of dehydration which was remedied by three glasses of water. (Watch her shaking fit here)

Anyone with experience of dehydration will know that hospitalization on an intravenous drip for twenty-four to thirty-six hours is necessary not three glasses of water as Chancellor Merkel claimed. This is especially critical for dehydration victims in her age group.

Merkel’s explanation has all the indications of a cover-up to hide a more serious health issue that may call into question her fitness to govern and go some way to explain her past decisions that have proved disastrous not only for the German people but for the entire population of Europe.

After the refusal of Germany’s immigrant population to integrate and a subsequent increase in violent crime Chancellor Merkel was forced to admit that multi-culturalism had failed. This was backed up by a similar statement by then Prime Minister, David Cameron, with reference to the British mass immigration and multi-cultural disaster.

The response by Merkel to open the borders further and invite more immigrants from incompatible cultures is not the actions of a sane person by any stretch of the imagination.

This madness has been especially disastrous for women and young girls who have been subject to violent sexual assaults, rape and murder by testosterone fueled young Muslim men who not only believe women are inferior but also believe that European women are whores who are theirs for the taking.

Her response to the economic collapse of the Eurozone, particularly in Greece, Italy and Cyprus were equally insane and caused decades of poverty and unemployment especially among young people who are forced to emigrate by the tens of thousands in search of a future elsewhere.

These countries did not meet the criteria to join the Euro in the first place and should have been allowed to leave when the debt crisis hit. At Merkel's insistence their governments were replaced by EU bureaucrats who proceeded to wreck the economies further to protect the Euro.

Despite the Greek economy being bankrupt German arms sales continue unabated adding to the debt crisis and the misery of the Greek people. Callous Merkel remains unmoved by the plight of the Greek and Italian people.

Merkel’s domination of the European Union is absolute and there for all to see; nothing happens without the explicit approval of the German Chancellor. Great Britain’s exit from the corrupt and failing bloc is a classic example of Merkel in action.

It was after a summons to Berlin by Merkel that Theresa May unveiled her notorious Withdrawal Agreement and Political Declaration to the British people overriding almost two years of negotiation between May’s negotiators and the EU bureaucrats.

Known as May’s surrender document this new legally binding treaty locks Great Britain into the EU institutions in perpetuity despite the British people voting to leave in the biggest democratic exercise in their history.

Despite her public announcement that she is stepping down, Merkel’s change of mind and refusal to relinquish power is another indication that all is not right upstairs. One would think that after a lifetime in politics, including fourteen years as German Chancellor, she would look forward to a long and happy retirement. Most normal people would relish that opportunity especially with a gold-plated, taxpayer funded pension.

If the prognosis is correct and Chancellor Merkel is off her rocker then it is incumbent upon the ruling elite to remove her from power before she does any more damage to the people of Germany and of Europe.

To conclude, in many industrial sectors, positions of responsibility where the safety, security and well-being of the public are at stake random drink and drug testing is mandatory along with an annual medical check to assess fitness to continue.

There is no reason why those in power who are responsible for the safety, security and well-being of millions of people should not be subject to the same drink and drug testing regime with an added test for mental competence.

If my contention is accurate and Chancellor Merkel’s uncontrollable shaking is the symptom of an illness that is affecting her mental capabilities and hence the safety of the people, then the ruling elite should act in the public interest and remove her from power.

Chancellor Merkel has suffered another bout of uncontrollable shaking some ten days after the last one. Unless Mrs. Merkel has a rabies induced aversion to water two uncontrollable shaking fits in a matter of days cannot be put down to dehydration. Something is seriously wrong with this woman and the public has a right to know if it is affecting her judgement and fitness to rule.