Where Your Nightmares End…Elijah Cummings Begins 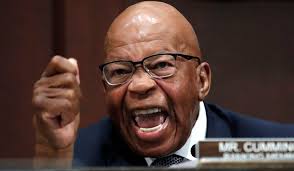 President Trump is a master of the art of triggering his enemies into apoplexy while gaining support in the process. His enemies on the left and their bought-and-paid-for media whores have gone into meltdown over his monstering of Congressman Elijah Cummings.

Cummings used his position as Chairman of the House Oversight and Reform Committee to bully, abuse and vilify the acting Secretary of Homeland Security, Kevin McAleenan, about conditions at the southern border.(See here)

His bellicose rant was scripted in advance and part of the choreographed attempt by Democrats to compare detention facilities at the southern border with German World War II concentration camps and enforcement officers with Nazi concentration camp guards. His inference that they routinely abuse children was particularly loathsome.

President Trump was having none of this nonsense against a public servant doing his job under difficult and sometimes impossible circumstances. Circumstances that are created by legislators like Cummings who refuse to act on border security for political and anti-Trump reasons.

The President's response was straight out of the Trump truth-to-power playbook:

“Rep, Elijah Cummings has been a brutal bully, shouting and screaming at the great men & women of Border Patrol about conditions at the Southern Border, when actually his Baltimore district is FAR WORSE and more dangerous. His district is considered the Worst in the USA......

....As proven last week during a Congressional tour, the Border is clean, efficient & well run, just very crowded. Cummings' District is a disgusting, rat and rodent infested mess. If he spent more time in Baltimore, maybe he could help clean up this very dangerous & filthy place”.

If that didn’t get their hackles up, then his follow-up certainly did:

“Why is so much money sent to the Elijah Cummings district when it is considered the worst run and most dangerous anywhere in the United States. No human being would want to live there. Where is all this money going? How much is stolen? Investigate this corrupt mess immediately”.

“Anyone who took the walk that we took around this neighborhood would not think you’re in a wealthy nation. “You would think that you were in a Third World country.”

“We’re talking about a community in which there are hundreds of buildings that are uninhabitable,”

“Residents of Baltimore’s poorest boroughs have lifespans shorter than people living under dictatorship in North Korea,” Sanders wrote. “That is a disgrace.”

The failure of Elijah Cummings to alleviate the misery of his constituents by dealing with crime and the rodent infested filth is indisputable and therefore him and his controllers deploy the standard defence.

By highlighting his failures President Trump is………………..you guessed it, a racist.

That line of defence also makes Bernie Sanders a racist and everybody else that points out his failings. Most concerning is the fact that the truth itself is racist if it exposes the failings of a member of the black caucus.

I will conclude on a lighter note by quoting from the famous poem ‘The Pied Piper’ by Robert Browning;

‘Rats! They fought the dogs and killed the cats, And bit the babies in the cradles, And ate the cheeses out of the vats, And licked the soup from the cooks' own ladle's, Split open the kegs of salted sprats, Made nests inside men's Sunday hats, And even spoiled the women's chats By drowning their speaking With shrieking and squeaking In fifty different sharps and flats’.

The conditions in Baltimore in 2019 mirror those of Hamelin Town in the year 1284. The inhabitants were eventually saved from their plague of rats by the Pied Piper but went on to lose their children because the political class reneged on their promise to pay him the agreed fee.

Our business was done at the river's brink; We saw with our eyes the vermin sink, And what's dead can't come to life, I think. So, friend, we're not the folks to shrink From the duty of giving you something for drink, And a matter of money to put in your poke; But as for the guilders, what we spoke Of them, as you very well know, was in joke. Beside, our losses have made us thrifty A thousand guilders! Come, take fifty!

According to the Cummings defence the people of Hamelin town were racists for highlighting their rat problem to the ruling class and the Pied Piper was a capitalist demon for exploiting a crisis by demanding his fee.

At last the people in a body To the town hall came flocking:''Tis clear," cried they, 'our Mayor's a noddy; And as for our Corporation--shocking To think we buy gowns lined with ermine For dolts that can't or won't determine What's best to rid us of our vermin! You hope, because you're old and obese, To find in the furry civic robe ease? Rouse up, sirs! Give your brains a racking To find the remedy we're lacking, Or, sure as fate, we'll send you packing!"

Elijah Cummings hasn't found the remedy for the rat plague in his district so what have the residents got to lose by sending him packing?


According to the unhinged Democrats the former Mayor of Baltimore, Catherine Pugh, is a racist for pointing out the filthy, rat infested garbage dump that Elijah Cummings has failed to address despite being a Maryland politician for over three decades.


Unfortunately for those who play the race card the lady, like Cummings, is black. 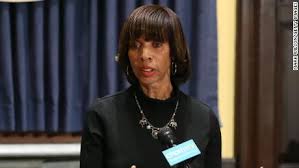 Watch her in action here

Posted by Daniel Thomas at 9:24 AM