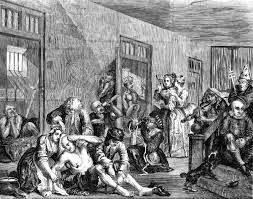 It seems strange that political activists who are passionate about their cause travel half way around the world to impose their agenda on the British people before putting their own house in order first.

My guess is that its isolated position in the southern hemisphere has kept Australia far enough away from the malign influence of  western 'progressivism' that it has managed to hang on, at least in part, to its Judeo-Christian heritage and moral values.

Great Britain's Judeo-Christian heritage and moral values have been gradually eroded away after years of invasive 'progressivism' to the point where every degenerate from Pakistan to Perth feels comfortable enough to push their sexual agenda and indulge in once taboo sexual practices without shame.

'Progressivism' spreads like weeds in a flower bed; if they aren't regularly dug up by the roots and destroyed they will flourish and eventually take over, choking off any flowers that try to bloom.

Great Britain is now an old flower bed where only weeds flourish, where every native flower is strangled from seed and allowed to wither and die.

It's during this current election campaign that Green Party leader, Australian Natalie Bennett, has become a public figure and the extent of her lunacy become more widely known.

Watching her public performances and reading about the policies she wants the British people to adopt one cannot help but form the opinion that this lady is not just slightly unhinged but totally bat shit crazy.
(See her famous car crash BBC interview here)

Watching her public performances holds a morbid fascination akin to that of nineteenth century Londoners who considered watching the ravings of lunatics incarcerated in Bedlam as entertainment.

With hindsight, the recent revelations that her partner, Jim Jepps, holds depraved sexual fantasies should come as no surprise, and it is not a mystery why this lady traveled half way around the world to pursue her delusions on a tiny windswept island in the North Atlantic.

Likewise her fellow antipodean, Patricia Hewitt; she made the long voyage to Great Britain to pursue her deviant sexual agenda which included child sex. She gave her support to the Paedophile Information Exchange (PIE) who campaigned for incest to be decriminalised and the age of consent for sex between adults and children lowered to children as young as ten.

After having been found out she now claims her advocacy for PIE was in error and naive; this stinks of political expediency. Holding the view that "there is no proof that sex between adults and children causes no harm" suggests conviction not error or naivety, as does the claim that 'innocent adults are seduced by children'.

Hewitt took over the safe Labour held constituency of serial child abuser, Greville Janner, who remains in the House of Lords to this day. She made it to the upper echelons of the Labour Party, including Secretary of State for Health. Her career went rapidly downhill when it was revealed she was an expenses cheat and embroiled in corruption via a cash-for-access scheme. This earned her a five year ban from the House of Commons to go along with her ill gotten gains.

No comment about degenerates travelling half way around the world in order to degrade the moral values of Great Britain would be complete without a mention of Australian draft dodger and militant homosexual Peter Tatchell.

Twice selected as a Labour Party candidate for Parliament and twice rejected by the electorate, Tatchell joined his fellow Aussie in the Green Party. He also has campaigned for lowering the age of consent for sex between adults and children.

It is highly likely that these degenerates and their filth would be given short shrift in their native Australia but knew they would be welcome in 'progressive' Great Britain.

Since the 'progressive' movement succeeded in submerging Great Britain's moral compass into a cesspit of vileness and corruption it has become the country of choice for perverts, paedophiles and organised prostitution gangs.

Muslim paedophile gangs, mainly Pakistani, have been allowed to groom, gang rape and then traffic under age white girls with impunity. Paedophiles led by celebrity sub human, Jimmy Savile, abused children on an industrial scale at the BBC and in hospitals across the country with the full knowledge of the authorities.

Even the Westminster Parliament is embroiled in a paedophile scandal that is being desperately covered up by the Labour, Conservative and Liberal Democrat establishment to protect their own.

It would be foolish to pretend that Great Britain didn't have minor problems with immorality and sexual promiscuity before the descent into degeneracy but the scale of it today would have been unimaginable just a few decades ago.

The rise of 'progressivism' resulted in the fall of morality and the degradation of standards that had evolved over centuries. Now Great Britain is a magnet for the likes of Bennett, Hewitt, Tatchell, Muslim paedophile gangs and East European prostitute rackets who are prepared to traverse the planet not only to impose their agenda on others but to live out their fantasies in real life.

Posted by Daniel Thomas at 3:25 PM