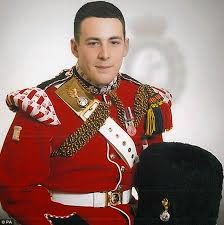 With spin and obfuscation being the normal medium of communication during election time, anyone who listens to political discourse with any regularity will be hard pressed to understand what exactly the politicians have in store for we the people. Pre-election promises evaporate into thin air as soon as the votes are counted while the politicians carry on where they left off before the campaign.

For the short term, the usual diet of false promises and bribery can be taken for granted but it takes more detailed observation to understand their intentions for the longer term. In fact the political class go to extraordinary lengths to keep their true intentions away from the people for fear of an electoral backlash.

History has taught us to our cost that long term agendas can take a decade or more to fully implement and in the case of the federal European State, several generations. (In the case of the USA, fundamental transformation from free enterprise prosperity to third world socialist mediocrity is into its seventh year)

It is unlikely that Great Britain would be in the appalling state it's in today if during his election campaign candidate Tony Blair had declared his intention to alter the demographic and cultural balance of the country using open border mass immigration; nor did he declare his intention to move the economy away from individual prosperity and self reliance to one of taxpayer funded government dependency using extended welfare entitlements.

He wouldn't have stood a cat in hell's chance had he been honest with the people and declared his intention to increase taxes and impose a further one hundred new taxes to finance his dependent client groups and new voter base.

One has to look closely and analyse every word and action to get at the truth of what their long term agenda is and it's sad to say that the majority of prospective voters don't have the patience for such scrutiny. Instead they rely on the mainstream media for guidance which, as we know, is controlled by the political establishment and the party spin machines.

Governments of all colours, along with the establishment, vehemently deny that they are using Islam and its adherents as the weapon of choice to impose a so called 'multi-cultural society', however their words and actions demonstrate their absolute determination to see this transformation through to its conclusion.

Islam and its adherents are above reproach and it is clear that there is no depth to which the political class will not plummet in order to protect their cultural and religious cannon fodder and by extension, their 'multi-cultural' agenda. 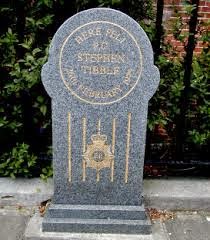 In 1975, twenty two year old police officer Stephen Tibble, was fatally shot while apprehending an Irish terrorist on a London street. A memorial was unveiled at the location in honour of his sacrifice.

In 1984, twenty six year old police officer Yvonne Fletcher was fatally shot while policing a demonstration by anti-Gaddafi's dissidents outside the Libyan Embassy in London. A memorial was unveiled at the location in honour of her sacrifice.

In 1993, nineteen year old black teenager Stephen Lawrence was murdered on a London street in a racist attack. Due to the racial element this particular murder was seized upon by the political class to accuse the police, and by inference British society as whole, as institutionally racist. This was also seized upon by the self loathing community who turned the tragic death of a teenager into a celebrity cause. Stephen got two memorials and his mother was made a Peer Of The Realm entitled to sit in the House of Lords.

Memorials were unveiled for murdered politician Airey Neave and those killed in the assassination attempt on Margaret Thatcher in Brighton 1984. Both crimes were committed by Irish terrorists.

In 2013, twenty five year old British soldier Lee Rigby was brutally murdered by Muslim terrorists on a London street in broad daylight. Despite public demand no memorial will be unveiled in honour of his sacrifice. Despite attempts by the political class to bury this decision with weasel words and excuses, it turns out that the real reason is for fear of offending Muslims. 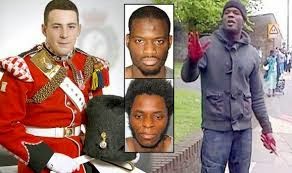 This appalling decision must be coupled with the recent announcement that actions against the Muslim population in Great Britain will be treated as a hate crime + 1, an extra bad hate crime. This can be put down to shameless trolling for the Muslim vote, but the continual grovelling appeasement of the Muslim population, which includes hate preachers, ISIS supporters and prospective jihadis, will not be found in any election campaign manifesto. Any questions about it will be greeted with the usual smears including the standard insults of racist, bigot and Islamophobe.

The political class and the establishment will not be enlightening the people during this election campaign as to what their long term agenda for the country is. Missing from any manifesto or election material will be anything relating to their true agenda of imposed multi-culturalism, cultural and religious relativity or taxpayer funded government dependency for their imported welfare colonists.

There is no craven act they will not commit nor any depth to which they will not sink in order to impose their political agenda and that includes insulting the memory of a hero murdered on the streets of the capital city of a once great country.

Posted by Daniel Thomas at 6:04 AM