Despite its disastrous effect on every aspect of peoples lives, anyone who merely questions the British government's policy on immigration is immediately smeared with labels such as racist, bigot or xenophobe - with Fascist and Nazi sometimes thrown in for good measure.

However despicable, this is a tactic used by the government and its supporters in their effort to impose a so called 'multi-cultural society' on the British people at the behest of the UN/EU.

With the anti-immigrant rioting by black people in South Africa getting ever more bloody this tactic has become somewhat hypocritical, not that this will bother a shameless political class. More importantly their failure to condemn the rioters using the same labeling blows their self adopted moral superiority clean out of the water.

Nobody with a grasp of world events over the past half century will be surprised that the predictions of all the non-'progressive' political commentators on the planet have been proved right and the self appointed guardians of morality proved wrong.

When the Marxist orientated political activists and their army of bureaucrats at the United Nations appointed themselves the de facto world government, the well being of the global population would always take second place to their political ideology.

This was no more apparent than in Africa. The world government in New York dictated that white governments were to be replaced by black governments despite the warnings that this would spell disaster for the people.

They wouldn't countenance a  program of educating, and subsequently integrating, suitable people into government over a long period of time, decolonisation had to be achieved at the earliest in order to satisfy their political bigotry.

The UN remained unmoved when the predicted disasters - which included famine, civil wars and other human catastrophes -  blighted millions of people when the British and other European colonists were ordered to give up their African possessions.

Their appointment of a psychopathic Marxist dictator, Robert Mugabe, in neighbouring Zimbabwe who, as predicted, proceeded to slaughter tens of thousands of his own people then turn the bread basket of Africa into a famine zone, didn't prevent them from repeating the exercise in South Africa. 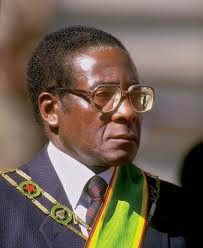 (It's worth reminding ourselves that they are unable to acknowledge their failure in Zimbabwe and as a consequence Butcher Bob Mugabe is still there today some twenty eight years after starting his bloody reign of terror, looting and murdering with little or no sanction from the UN)

The one thing the UN ideologues did learn was to accompany their diktats to hand over power with a massive propaganda campaign based on a moral basis for their demands while painting a Utopian picture of a future 'multi-cultural society'.

Despite all the gory images coming out of South Africa, they are unable to accept the utter failure of their multi-cultural project. They persist in projecting South Africa as the Rainbow Nation where racial discrimination is a thing of the past and all the people, regardless of race, religion or skin colour, live side by side in perfect harmony each respecting the other.

It's worth noting also that all the morally superior activists, including politicians, sports people and publicity hungry celebrities who were most vociferous in their condemnation of white South Africans have gone silent as their non white client group goes on a blood soaked rampage based on immigration.

These same activists who continue to smear ordinary decent people in Great Britain as racists, Fascists and Nazis for having the temerity to peacefully question mass immigration are duty bound to voice a similar opinion on their black brothers and sisters in South Africa who killing over the same issue.

What is happening in South Africa is a clear demonstration that:

a) there is no such thing as a 'multi-cultural society", it is the figment of the imagination of political ideologues.

b) imposing 'multi-culturalism' on a reluctant people without their consent will end in violence and bloodshed.

c) politicians can not legislate for people to love each other and get along.

d) the UN is no longer fit for purpose and should be replaced with a non-political organisation dedicated to achieving peace through good governance and protecting individual liberty.