Barack And Dave - Appeasement Won't Save Us From Radical Islam

Watching the performances of British Prime Minister David Cameron and President Barack Obama one would be forgiven for coming to the conclusion that they are positively lightweight when compared to statesmen like FDR, Harry Truman and Winston Churchill.

Bearing in mind that both sets of leaders were fighting a global war against a determined and ruthless enemy, making a comparison is justified but excruciating to endure.

Comparing the PR executive Cameron with the battle hardened soldier and statesman is grossly unfair to Churchill and an indictment of the British political system. To think that a media created PR man can attain the same office as Sir Winston is an abomination of the mind.

I assume the same is being said about a community organiser attaining the same office as accomplished statesmen such as FDR, Truman or John.F.Kennedy.

Watching the ongoing appeasement efforts currently being undertaken by the Obama/Cameron administrations I have no confidence whatsoever that the war against radical Islam and a possible nuclear armed Iran will be won any time soon. More importantly I have less confidence that we will be handing over a better or safer world to our children than the one from just a couple of decades ago.

As opposed to the previous war leaders, Obama and Cameron are committed to their 'progressive' ideology and crippled by political correctness to the point where they can barely name the enemy that is committing unspeakable atrocities across the planet. Nor can they condemn the wider religious ideology that commands the jihadis to commit such horrors in its name.

Despite the torture, beheading, rape and murder being carried out in the name of their god, Allah, as commanded by their prophet, Mohammad, and as written in their holy book, the Koran, Obama and Cameron continue to insist that Islam is a 'global religion of peace' on the spurious grounds that the perpetrators are a minority.

Using Obama and Cameron's logic, because the majority of Germans did not support Hitler or the Nazis during World War II, National Socialism was also a 'global religion of peace'.

Neither Churchill, FDR nor Truman had any such reservations when talking about Hitler and his gang of murderous thugs nor did they fail to condemn the Nazi ideology they used to justify their murderous rampage across Europe.

Unfortunately Cameron's ability to deliver a spin doctor authored speech in perfect, well spoken English can fool an audience into believing what he says, but his record in office reveals him to be something entirely different.

He earned the moniker 'Cast Iron Dave" because he gave the British people a cast iron guarantee that he would give them a referendum on the Lisbon Treaty but, in what would become his modus operandi, he reneged on that promise when his aim had been secured.

Like President Obama, David Cameron is a self confessed 'progressive' who is also committed to imposing the global reform agenda on behalf of the UN/EU.

One only has to look at the machinations undertaken by both of these organisations to get an idea of what they are trying to achieve. The number of malicious resolutions condemning Israel compared to those against the serious human rights abusers in the middle east is a clear indication of UN/EU's intention to eliminate the Jewish homeland.

The refusal to eliminate ISIS using the same overwhelming force that defeated Saddam Hussein's massive, battle hardened military machine in Iraq and the Taliban in Afghanistan, is a craven concession to the millions of Muslims who are effectively a fifth column in Great Britain and America.

To radical Islamists and jihadis, appeasement is perceived as weakness which only emboldens them to commit further acts of barbarity in pursuit of their caliphate. Despite the reality of the current bloodshed in the middle east, the attraction of ISIS to western educated men and women remains undiminished. 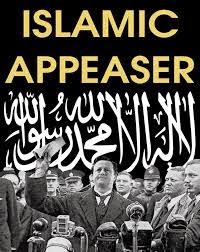 Hundreds of thousands of British and American Muslims support ISIS and hundreds, perhaps thousands, are prepared to give up their relatively comfortable lives in the west and risk death and destruction in some miserable desert cesspit on behalf of their god.

Appeasement takes many forms, from unrestricted mosque building to tolerating barbaric practises such as misogyny, child marriage, paedophilia and female genital mutilation to name but a few. At the same time as the Judeo-Christian heritage of Great Britain and America is being systematically erased at home, Christian communities as old as the Faith itself are being ethnically cleansed from the middle east.

Perceived to be nothing more than college kids, Obama and Cameron have already been given a humiliating lesson in geo-politics by Russia's President Putin and Syria's President Assad, watched closely no doubt by the Ayatollahs in Iran, ISIS and other radical Islamists around the world.

Looking at current events it's obvious that the world is an ever more dangerous place and will remain so all the while that the so called 'leaders of the free world' continue to appease Islam at home and abroad in pursuit of their cultural and religious equality agenda.

Appeasement will not replace 'shock and awe' as an antidote to radical Islam and while the Ayatollahs in Iran and ISIS rub their hands with glee, Churchill, FDR and Truman are spinning in their graves.

"How dreadful are the curses which Mohammedanism lays on its votaries! Besides the fanatical frenzy, which is as dangerous in a man as hydrophobia in a dog, there is this fearful fatalistic apathy. The effects are apparent in many countries. Improvident habits, slovenly systems of agriculture, sluggish methods of commerce, and insecurity of property exist wherever the followers of the Prophet rule or live. A degraded sensualism deprives this life of its grace and refinement; the next of its dignity and sanctity".

"The fact that in Mohammedan law every woman must belong to some man as his absolute property, either as a child, a wife, or a concubine, must delay the final extinction of slavery until the faith of Islam has ceased to be a great power among men. Individual Moslems may show splendid qualities - but the influence of the religion paralyses the social development of those who follow it. No stronger retrograde force exists in the world. Far from being moribund, Mohammedanism is a militant and proselytizing faith. It has already spread throughout Central Africa, raising fearless warriors at every step; and were it not that Christianity is sheltered in the strong arms of science, the science against which it had vainly struggled, the civilisation of modern Europe might fall, as fell the civilisation of ancient Rome".