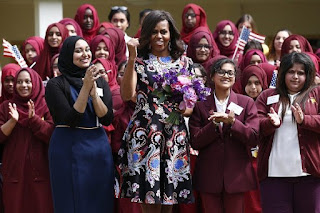 Being America's first black/white mixed race President, Barack Obama was in an ideal position to heal the wounds of racial division not only in the United States but across the world. Tragically, he and his administration threw that opportunity away in order to exploit the latent racial animosity between communities and deepen the divisions as a means of imposing their 'progressive' ideology.

His own personal animosity toward Great Britain and it's people is palpable and this is supposedly driven by abuse metered out to his late father by the colonial administration in Kenya during colonial days.

Even the briefest investigation reveals that the only abuse meted out to Obama Senior was by Kenya's first President and dictator, Jomo Kenyatta, who prevented him from making a living on his return from the USA thus sending him over the edge into alcoholism.

Michelle Obama admitted that the first time in her life she was proud to be an American was after the election of her husband to the Presidency. If that was her sentiment toward her own country which has afforded her the opportunity to become rich beyond the dreams of millions of her compatriots and finally make it to the White House, then Great Britain has no chance of getting her respect.

Her latest jolly abroad, billed as a two day whistle stop tour to the UK to promote her girls education initiative, 'Let Girls Learn', consisted of a visit to a segregated girls school in the notoriously corrupt Bangladeshi ghetto of Tower Hamlets. Avoiding the possibility of meeting any real British people, her 'tour' also consisted of a visit to Prime Minister David Cameron at No 10 Downing Street and tea with Prince Harry at Kensington Palace.

Her speech to the pupils at the Mulberry Schools for Girls was not only an exercise in the Obama administrations deeply ingrained policy of victimology but also a calculated insult to the British people.

In view of her status as First Lady of the United States we can allow her a little licence to fabricate but her assertion that 'she sees herself when she looks out at all these young women' is dishonest in the extreme, while her claim that 'their story is her story' would suggest that she too was raised wearing a hijab in a male dominated Muslim ghetto or something similar.

This visit and the subsequent speech by Michelle Obama was a conscious attempt to portray Tower Hamlets as representative of Great Britain as a whole as well as portraying the inhabitants as disadvantaged by their skin colour and religious beliefs by an institutionally racist population.

The truth is that these girls are victimised and disadvantaged not by institutionalised British racism but by their own parents and their institutionally misogynistic anti-western Muslim community.

The people of this community had all the advantages of any other British citizen when they or their parents emigrated from Bangladesh. Instead they decided to ignore the advantages of freedom and individual liberty in an open society but went on to replicate the the country they left behind instead, warts and all.

The girls that Michelle Obama identifies with, and their parents, consider themselves to be Bangladeshi not British, they live their lives according to Bangladeshi culture and Islam while despising British culture and its way of life.

Unfortunately these girls will most likely end up married to an older relative from rural Bangladesh, confined inside the home with no rights whatsoever let alone women's rights. In a worst case scenario they may suffer genital mutilation or end up fulfilling their dreams like many other young 'British' schools girls by eloping to Syria in order to become jihadi brides for ISIS killers.

Michelle Obama could have made the effort to visit the outstanding Middle Rasen Primary School in rural Lincolnshire and offer her congratulations to the pupils and staff for their outstanding academic achievement. This school is an excellent example of what can be achieved when young people are not encumbered by 'progressives' with imposed 'multi-culturalism or Islam.

It's worth mentioning in passing that academic excellence is now frowned upon by the new breed of 'progressive' school inspectors and as a consequence the Middle Rasen Primary School has been denied the top award on account it is too English or not multi-cultural enough.
(Read the shocking story here)

Alternatively, Mrs Obama could have visited the schools used by her fellow 'progresssive' Tony Blair; the former Prime Minister of Great Britain who famously proclaimed that he "came to socialism via Marxism" who happened to be the person responsible for opening the borders to mass immigration from the undeveloped world including Bangladesh.

As a matter of ideological principle Blair opposed the private and selective education system in favour of the dumbed down state system whereby the all-must-have-prizes mentality has disastrously degraded education performance. Except for his own sons that is....after the proclamation by his Labour Party that they "didn't do God" Blair suddenly became a Roman Catholic in order that his sons could attend the much sought after, and selective, London Oratory faith school.

He could have practiced himself what he preached to the British people but obviously dumbed down schools are for the victims of socialism not its prophets.

Its worth noting in conclusion that Great Britain's most notorious race baiter, the Member of Parliament for  Hackney North and Stoke Newington, Dianne Abbot, is like Blair, a passionate campaigner against private education........except for her own son who attended the fee paying City of London School.

Dianne Abbot styles herself as Afro-Caribbean as opposed to British who's anti-white sentiments and rhetoric would make her a shoe-in for a Barack Obama advisor on race along with the Reverends Al Sharpton, Jesse Jackson and Jeremiah Wright.

Great Britain under Blair, Brown and now Cameron has been fundamentally transformed for the worse and is now resembling a third world nation which is descending further into mediocrity with every year that passes.

Its disheartening to note that under the Obama administration, with Michelle in tow, the United States is going the same way and when it does the last hope for the world is extinguished. Lets hope and pray that the American people come to their senses and bring their political class to heel, something their trans-Atlantic cousins studiously failed to do.

Posted by Daniel Thomas at 9:11 AM