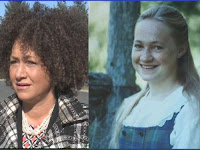 Just when you think that the 'progressive' left has reached the peak of their imbecility, along comes Rachel Dolezal, a white girl pretending to be black, to prove us all wrong. The behavior of this sad excuse for a human being has not just taken self loathing to a whole new level, she's taken it into the stratosphere.

Putting hilarity to one side it's worth looking at this issue in a little more detail in order to ascertain whether white people blacking up and pretending to be black people involves any wider implications.

I was aware of the 'white privilege' group of self loathers who believe that all white people are advantaged from birth due to their skin colour while ignoring widespread white poverty along with the fact that the highest offices in the USA have been occupied by black people. I was not aware however that there was a 'WrongSkin' affliction whereby some sad individuals who are white by birth and heritage identify themselves as black and therefore claim they are born in the wrong skin.

There is also the issue of legality, whereby due to the obsession with race and affirmative action in the USA, pretending to be from an ethnic minority or black can bear dividends. Many lucrative positions and scholarships are reserved for ethnic minorities and blacks where the qualifying requirements are sometimes relaxed in order to meet quotas.

It is asserted that Massachusetts Senator and possible Presidential candidate, Elizabeth Warren broke the law when she lied about her Native American heritage in order to secure a lucrative position at Harvard University on the basis of her minority status and being a person of colour.  Given the moniker 'Fauxcahontas' or 'Liawatha' her claim is based on a picture of her supposed great-great grandfather having high cheekbones and a cookbook with the demeaning title of Pow Wow Chow.


Despite being an absolute phony, Rachel Dolezal has secured a position as a part time professor for Africana Studies at Washington University in addition to a position as a civil rights activist with the National Association for the Advancement of Coloured People (NAACP). Although the organisation appears to have given her a green light, real black people are justifiably offended by her fakery.

The sad thing about this issue is the realisation of just how far the 'progressive' left have dragged America's reputation into the arena of wackiness and stupidity.

The Rachel Dolezal racial fakery, the obsession with sexuality and gender along with the global ballyhoo surrounding the fundamental transformation of Bruce Jenner into Caitlyn, the once respected United States of America has become the laughing stock of the world. 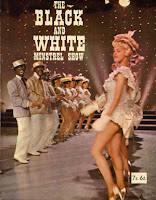 On a lighter side, the approval given by the NAACP to Rachel Dolezal adopting a black persona has afforded the world an opportunity to reverse some of the more risible aspects of political correctness and it can start with the rehabilitation of Al Jolson and other minstrels as part of Vaudeville and harmless light entertainment.

Nobody should be offended by a re-release of The Swanee Ribber with Rachel Dolezal's voice added to that of Al Jolson and in Great Britain re-runs of the immensely popular Black and White Minstrel Show can now be shown without causing offence.

Born-in-the-WrongSkin Michael Jackson, a sort of Al Jolson in reverse, certainly started something when he made colour change acceptable.