Engineering England's Fall - The Enemy Within 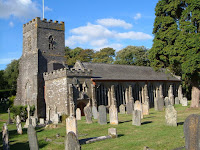 It's a worthwhile exercise to occasionally leave familiar territory to ascertain whether certain areas of the country are as one perceives them to be in order to confirm that ones interpretation of current affairs are based on reality as opposed to unjustified prejudices.

With this in mind I found myself far from home standing before the alter in a church dedicated to St. Thomas of Canterbury in a small village in the county of Devonshire, South West England.

The village is quintessentially rural England where history seeps from every stone and where every stained glass window in the ancient church tells a story. The site has been a place of worship since Saxon times where the base of the original Saxon cross can be found in the graveyard behind the war memorial.

The reason why this tiny church is relevant today is not only because it remains an active place of worship and facilitates the continuation of the ancient tradition of bell ringing, it's construction and dedication is due to one of the most notable episodes in English history. The murder of the then Archbishop of Canterbury, Thomas Becket, in 1170 by knights loyal to King Henry II. They carried out their dastardly act under the false impression King Henry actually wanted to be rid of "this troublesome priest" on a permanent basis.

It is this long embedded history and tradition which will eventually attract the attention of the metropolitan 'progressive' elite and put the English identity of this village in serious jeopardy.

Current events and the actions of the British establishment have proved beyond the shadow of doubt that they are totally committed to replacing England's culture and way of life with a so called 'multi-cultural society' and to this end they have packed Great Britain's institutions and the machinery of state with like minded agents equally committed to England's fall.

Evidence of this ongoing treachery abounds but one recent incident should be enough to convince even the most sceptical of readers of its veracity.

When government inspectors descended upon Market Rason Primary School in rural Lincolnshire they refused to award the top grade despite the high academic achievement because the school was too English or not 'multi-cultural' enough. (Read the appalling story here and here)

The fact that the catchment area is ninety seven percent 'White English' didn't appear to be relevant in their assessment but it speaks volumes about the animosity toward traditional England and the English way of life by these government agents.

When one takes into account that every government department, including the civil service and every institution from the NHS to the BBC, the police, the judiciary, the unions, the quangocracy, the EU and the UN are all stuffed to the rafters with committed 'multi-culturalists' like these school inspectors, what chance has a small village in rural Devonshire got to preserve its way of life?

This replacing of one historic culture and way of life with another in order to achieve political ends is referred to as"un-homogenising" by the global 'progressive' elite who use the United Nations and the European Union as vehicles for their perverted agenda. Anywhere else on the planet its referred to as ethnic cleansing but I digress.

Appointed Special Envoy for Migration, career super bureaucrat Peter Sutherland openly advocates the EU "undermining national homogeneity" as matter of progress but as is normal practice among the unelected global 'progressive' elite the various people's affected are not allowed a say in this cultural upheaval let alone a vote.

Peter Sutherland and his fellow elitists have the mental ability to completely ignore the horrors visited upon hundreds of villages, towns and cities by open border mass immigration.

The rape of tens of thousands of underage white girls by Muslim paedophile gangs, people smuggling and violent street crime by East European criminal gangs, sex slavery and drug related turf wars on the streets of England and all the other negative aspects of mass immigration don't warrant a mention by the likes of Peter Sutherland and his fellow agenda driven bureaucrats.

Imposing 'multi-culturalism' on people who didn't ask for it and don't want it appears to be their life's ambition while ignoring the wishes of the people who's ancient way of life is under threat like never before.