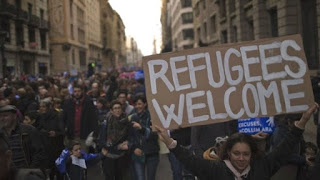 Back in February this year 160,000 Spaniards took to the streets of Barcelona, Spain, to demand the government open the doors to more refugees. It was just over two weeks ago on 4th August that a group of Spanish socialists rampaged through popular tourist resorts demanding their free spending visitors go home labelling them as the real terrorists while at the same time putting out the welcome mat for refugees. (See here)
On 10th August stunned tourists watched as phony refugees from North Africa stormed a popular beach in southern Spain in a scene resembling the D-Day landings in Normandy. (Watch the video here)

As an indication of their naivety, or stupidity, the imposing Town Hall in the Spanish capital Madrid proudly flies a ‘Refugees Welcome’ banner.

Prior to any of this, Islamic terrorist leaders have warned repeatedly that they are using the manufactured ‘refugee crisis’ to infiltrate its fighters into European cities with the sole intention of bringing death and destruction to the people in the name of Allah.

To the surprise of nobody, on Thursday 17th August refugees attacked two popular tourist centers in Barcelona and Cambrils killing fifteen people, including children and injuring over a hundred.

The people of Spain have yet to learn that the leaders of the European Union have embarked on a great crusade to destroy the ancient Judeo-Christian cultures of the nation states and replace them with so-called ‘multi-cultural societies’ regardless of the price being paid in blood and lost lives by the ordinary citizens.

The political leaders will go through the motions after every atrocity with their PR manufactured soundbites about thoughts and prayers, shoulder to shoulder, solidarity etc. ad nauseum, but they will take no effective action to stop the carnage and protect the people from a fanatical enemy that has sworn to kill and maim.


The cultural replacement project has a far higher priority than the deaths of few individuals from the common herd. Does anyone seriously think that fanatics like the insane German Chancellor, Angela Merkel, or the robotic British Prime Minister, Theresa May, give a monkey’s hind leg about the safety and security of their citizens when they steadfastly refuse to take any meaningful action to stop the carnage?

Despite the continued rape and murder of German citizens, Mad Merkel has already stated unequivocally that she will not countenance an upper limit on immigration into Germany or anywhere else in the European Union.

With all the faux sincerity she could muster, the queen of the soundbites, Theresa May, robotically repeated the exact same message she keeps for such occasions and the sad thing is she thinks the people believe it and take her seriously. “My thoughts are with the victims of today’s terrible attack” followed by the utterly meaningless “The UK stands with Spain against terror”.

Exactly what does ‘standing with Spain against terror’ actually mean and how will it help the victims or prevent the next attack? We have already stood with France, Belgium, Germany, Sweden, the USA and a host of others against terrorism but it still keeps happening with terrifying regularity. (We stand with Spain here)

At this very moment a Muslim terrorist somewhere is plotting to kill us; we don’t know where or when or how but we know it will happen.  The sad fact is that the likes of Merkel and May know it will happen also and they have their soundbites and slogans ready for delivery when it does. Effective action to prevent it however they will not take.

To conclude, the Spanish people and the rest of the western world should understand that the Grim Reaper brings death and destruction in his wake in the form of phony refugees and when you invite him in that’s exactly what you will get.

It’s worth reminding the Spanish people as they demand the doors be opened for more refugees. Their economy has crashed since they joined the Euro, unemployment stands at 17.8% with youth unemployment at a staggering 39%; they should also be reminded that tourism accounts for 12% of the entire Spanish economy and is responsible for 16% of all jobs. (See here)

Young Spaniards who should be the seed corn of any sustained economic recovery are emigrating in record numbers in the search of opportunities elsewhere.

On the other side of the economic equation, recently arrived phony refugees contribute zero to the economy and present a drain on scarce resources. In the unlikely event they look for work, they will only increase demand for unskilled jobs and hence depress wages further and increase unemployment further.

The only possible upside for Spain is that, apart from migrants from former Spanish territories, the phony refugees are actually economic migrants that are using Spain as a gateway and will most likely leave as quickly as possible for those parts European Union that offer the best welfare benefit entitlements.

Posted by Daniel Thomas at 1:37 PM