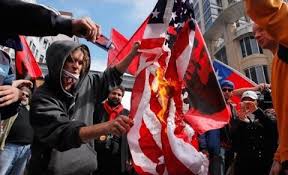 One of the main weapons in the armory of the socialist/communist/liberal community as they seek to intimidate into silence anyone who disagrees with their campaign to destroy the United States of America is their use of demonization and smear as a prelude to violence.

Rigidly policed political correctness is the whip they use to discipline society, ensure conformity, impose groupthink and discourage dissent. Divide and rule is their modus operandi whereby everyone is categorized by race, ethnicity, religion, gender, sexuality, culture and skin color then declared an oppressed minority and given victim status.

The mainstream media, which serves as the propaganda arm of the ruling elite, have constructed the narrative that the oppressors are exclusively white skinned particularly those with a Judeo-Christian heritage.

Students of history and politics will recognize this as Cultural Marxism. This replaced economic Marxism when the dangerous old fools’ predictions of a crisis of capitalism leading to the violent imposition of a communist state failed to materialize in the developed industrial countries.

The words homophobe, Islamophobe, xenophobe, misogynist and bigot are used as ad hominem smears against anyone who dared question the ‘progressive’ agenda. This included gay marriage, the imposition of Islam and its practises, women’s issues, border security, illegal immigration etc.

Even those who expressed their love of country and respect for its laws and way of life were routinely demonized and smeared as xenophobic.

By far the favorite and most used smear was ‘racist’. The race card was used against anyone who strayed away from the orthodox point of view on everything from border control, illegal immigration, opposition to President Obama etc. etc. It was also used to smear anyone who questioned the imposition of Islam and its practises even though Islam is not a race.

Due to overuse the word started to lose it impact and the people began to lose their fear of it. It’s not especially denigrating if every white person living in the real world is being smeared with the same word by the same swamp of politicians, virtue signaling Hollywood celebrities, wealthy black hypocrites and MSM propagandists.

With the demise of the word ‘racist’ the aforementioned socialist/communist/liberal community needed a new line of attack to keep their destructive momentum going and alighted upon ‘fascist’, ‘white supremacist’ and most risibley ‘Nazi’.

The sad thing is that their brainwashed army of street thugs actually believe the propaganda that they are the much publicized resistance valiantly waging a holy war against fascists and Nazi’s who they believe are intent upon establishing white supremacy or resurrecting the Confederacy or building a Fourth Reich.

These imbeciles are the living embodiment of what Lenin referred to as ‘useful idiots’. They have no idea they are being used by a powerful elite who are too cowardly to put their own heads above the parapet and fight for their communist revolution.


The irony is lost on these Toon Town revolutionaries and mommies’ basement dwellers that they are using the same tactics of violent intimidation that Hitler and his Nazi’s used during the rise of the Third Reich.

The upside to this new campaign of denigration is that the terms, fascist, white supremacist and Nazi are the most highly emotive terms in the lexicon of smears and are unsuitable since they do not accurately fit the people they are attempting to demonize.

The fact is that President Trump is not a fascist, a white supremacist or a Nazi; neither is Dr. Ben Carson or any other members of his administration and most importantly neither are the tens of millions of hard working Americans who voted them into office.

For what it’s worth neither am I, your humble correspondent, who was accused of being a Nazi for articulating forbidden views on border security and controlled immigration during the Brexit referendum campaign but I digress.

The very idea that an American administration, or a humble correspondent, is planning to send millions of innocent victims to die in gas chambers due to their skin color or minority status is beyond ridiculous and only a brainwashed mind can imagine such an awful thing to be true in modern America.

To conclude, the final act is not for the faint hearted; just like the word racist is becoming ineffective due to overuse, these latest smears will also be overused and become ineffective. When that time arrives there are no other words the propagandists can use that can conjure up the monstrous image of genocidal maniacs running the government.

They will have run out of effective smears and the only way left to defeat their perceived enemies and progress their communist revolution is to ramp up the violence toward civil war.

Posted by Daniel Thomas at 8:28 AM