Winston Churchill Would Be Banned From Speaking In Today's America 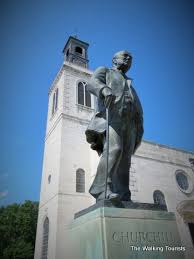 When Berkley’s KPFA Radio cancelled an appearance by evolutionary biologist Richard Dawkins for ‘hurtful speech against Islam’ the United States joined Great Britain and the rest of Europe by censoring any remarks about the so-called religion of peace no matter how minor or truthful.

Apart from his work in the field of evolutionary science and other disciplines, Dawkins is more renowned for his atheism and his criticism of all religions particularly Christianity. He has had many high profile clashes with the Roman Catholic Church and uses language during his discourse which has offended and hurt billions of Christians around the world.

This is in line with the rest of the main stream media (MSM) that is nothing more than a propaganda machine for the ruling elite who are intent on forcing acceptance of Islam in the western world using censorship and threats by labelling any criticism of Islam as hate speech.

Shamefully, this brings the United States into line with Great Britain and the rest Europe who have virtually banned any criticism of Islam and use so-called ‘hate crimes’ to intimidate people into silence. The highly politicized British police ‘service’ are using their supposedly scarce resources to monitor social media such as Twitter and Facebook looking for ‘Islamophobic’ comments to which they boast they have zero tolerance.

This is the same police 'service' that arrested the leader of the Liberty GB Party, Paul Weston, for quoting Sir Winston Churchill in a speech during his election campaign for the European Parliament. (See here)

The words used by Richard Dawkins which resulted in his censorship were mild by comparison to the observations made by Sir Winston Churchill in his book, “The River War” that resulted in Mr. Weston's arrest.

These were observations Churchill made from first-hand experience while serving as an officer in the British Army during the Boer War.

Who could deny the veracity of his words or the fact that they are as relevant today as they were back then.

“How dreadful are the curses which Mohammedanism lays on its votaries! Besides the fanatical frenzy, which is as dangerous in a man as hydrophobia in a dog, there is this fearful fatalistic apathy. The effects are apparent in many countries. Improvident habits, slovenly systems of agriculture, sluggish methods of commerce, and insecurity of property exist wherever the followers of the Prophet rule or live. A degraded sensualism deprives this life of its grace and refinement; the next of its dignity and sanctity. The fact that in Mohammedan law every woman must belong to some man as his absolute property – either as a child, a wife, or a concubine – must delay the final extinction of slavery until the faith of Islam has ceased to be a great power among men. Thousands become the brave and loyal soldiers of the faith: all know how to die but the influence of the religion paralyses the social development of those who follow it. No stronger retrograde force exists in the world. Far from being moribund, Mohammedanism is a militant and proselytizing faith. It has already spread throughout Central Africa, raising fearless warriors at every step; and were it not that Christianity is sheltered in the strong arms of science, the science against which it had vainly struggled, the civilisation of modern Europe might fall, as fell the civilisation of ancient Rome.”
― Winston S. Churchill, The River War

This paragraph alone would result in Great Britain’s war time Prime Minister being labelled as an Islamophobe and banned not only from an insignificant radio station in Berkley but the entire MSM in the USA.

When then Prime Minister Churchill was invited in May 1946 by President Harry S. Truman to make a post war speech in Fulton, Missouri, he laid bare the intentions of Stalin and communist Russia at a time when negative talk about the wartime ally was all but forbidden.

His Sinews of Peace speech, better known as the Iron Curtain speech, correctly predicted the expansionist plans of Stalin in Europe and the resultant cold war. (Watch it here)

He was accused of war mongering and castigated for insulting a wartime ally who was instrumental in the defeat of Adolf Hitler and his National Socialist German Workers Party (Nazi’s).

Churchill was right in his assessment of Stalin and his communist party just as he was right about the nature of Islam. Like Richard Dawkins, in modern politically correct America, the great man would most likely be censored if he was invited at all.

In conclusion, for the attention of Antifa and the rest of the George Soros sponsored cadres of socialist  juveniles, Sir Winston made his speech at Westminster College in Fulton Missouri. The site contains a relocated church that was bombed during the London Blitz and a superb Churchill museum marking the occasion of his speech. Outside stands an imposing statue of the great man which I am sure triggers many a snowflake as they pass by.

In line with your current behavior it is your duty to don your masks, tool up and knock the place down then convince yourself that Islam is a religion of peace and Winston Churchill was never there.