To The Political Class The Orlando Carnage Is Collateral Damage 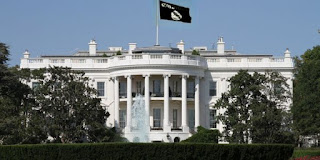 It is understandable that civilised people will be shocked by the death and destruction visited upon the innocent club goers in Orlando, Florida but they shouldn't be surprised, after all everyone knew it was coming.

The Muslim groups that carry out these bloody outrages have advertised their intention to attack innocent Americans both at home and abroad via their extensive and efficient social media propaganda operations.

The biggest questions facing the American people, and the entire civilised world for that matter, is why are the political class not listening and taking these threats seriously, and why are they not taking effective steps to eliminate this threat and protect the people of America and the wider world at large?

The choreographed media performances by the political class have become depressingly familiar as the atrocities against innocent Americans continue while promises to act are made at the time then quietly dropped when the news cycle moves on.

It seems like an age ago but it has only been three months since the political elite expressed their collective faux outrage at the Brussels massacre last March where thirty-two innocent victims were killed by Muslim jihadis and over three-hundred injured.

It's only been seven months since they expressed the same faux outrage at the San Bernadino massacre in December 2015 where fourteen innocent Americans were murdered and 17 injured.

It's been a year since the same political elite dusted off the soundbites in the wake of the Chattanooga massacre that took the lives of five innocent Americans and injured two in July 2015.

In Europe it's only been seven months since Muslim jihadis murdered one hundred and thirty innocents and injured three hundred and sixty-eight in the Paris massacre.

Remember "Je Suis Charlie"? It's been eighteen months since the debilitating spectacle of world leaders taking part in a cynical phony photo opportunity after the Charlie Hebdo massacre in Paris.

Since these atrocities, and despite promises of action to keep the people safe, no effective action has been taken.

On the contrary, the fundamental transformation of America is continuing at an accelerated pace as President Obama reaches the end of his time in office and the threat of a non establishment President undoing and reversing the deliberate downgrading of America becomes a reality.

The borders remain open, legal and illegal immigration is continuing. The re-location of unvetted Muslims from the middle east is carrying on apace despite ISIS confirming that they will infiltrate their operatives into America posing as refugees.

The government is continuing to legitimize and give citizenship to people who have aroused the suspicion of the security agencies. Rigidly policed political correctness and fear of being labelled a racist serves to crush any dissent.

The Obama administration has been heavily infiltrated by Muslims including his Senior Advisor and Director of the Office of Public Engagement and Intergovernmental Affairs,Valerie Jarrett, an American documented Iranian who has openly voiced her intention to make America "a more Islamic country". 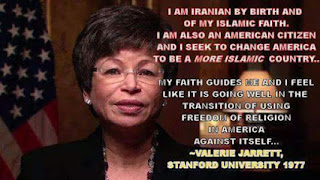 The global political elite have embarked upon a great crusade to re-order the post-war planet and nothing will deflect them from the course they have set. The new world they envisage is based on equality of nations, cultures and religions. This cannot be achieved with an advanced, prosperous Judeo-Christian America existing alongside backward, poorer nations.

America must be downgraded accordingly and the hegemony of Judeo-Christians in American life must be eradicated. This can be confirmed by the actions of the President aided and abetted by the political establishment along with the two other branches of government who have been co-opted into the project. Namely the United States Congress and the Supreme Court.

The promotion of Islam as great global religion of peace while simultaneously denigrating Christianity is a tangible part of the same project and will continue regardless of the ongoing massacres being perpetrated by Muslims both in America and across the world.

The news cycle will move on and the government will continue with it's fundamental transformation but the American people and those of the civilised world would be wise to remember that a billion or so Muslims across the planet have declared a holy war against the civilised world and against America in particular. The number of peaceful Muslims we hear so much about are so small in number by comparison they are insignificant and have no influence whatsoever on the majority.

The American people can expect more Orlando massacres, more San Bernadino's, Chattanooga's and Fort Hoods, the political class have embarked on great crusade to re-order the world and America's place in it. Nothing will stop them and the death of a few hundred more innocent Americans is considered a small price to pay.

See my response to the Brussels massacre here

Posted by Daniel Thomas at 9:17 AM