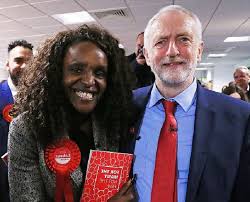 A treacherous Parliament has voted 313 to 312 to deny the British people their birthright and hand over the governance of their country to a cabal of unelected, unaccountable globalist bureaucrats in Brussels.

If anyone was under the impression that the reputation of Parliament couldn’t sink any lower then this vote should dispel the notion once and for all.

Prime Minister Theresa May joining with Jeremy Corbyn, the communist leader of the Labour Party, to scupper Brexit was the lowest point so far but the appearance of Fiona Onasanya in Parliament to supply the casting vote has taken it even lower.

Of Nigerian descent, Ms. Onasanya is a convicted fraudster released from prison early. She is subject to a curfew and wearing a police monitor on her ankle. She is currently involved in another court case accused of discrimination against a disabled employee.

A convicted law breaker making laws for the British people to obey has removed the last vestiges of credibility from this rotten Parliament.

The image above is the jailbird Onasanya grinning like a Cheshire cat with the communist ant-Semite that leads Her Majesty’s Opposition in the Mother of Parliaments.

Posted by Daniel Thomas at 5:21 AM