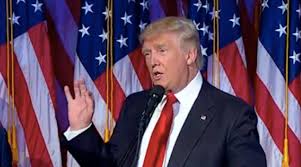 The visceral hatred of President Donald Trump by Leftists has become a phenomenon to behold. The hysteria stoked up by the bought-and-paid-for media causes a demented reaction by people many would consider to be intelligent and well balanced.

With the proposed state visit of the President to Great Britain, the Trump Derangement Syndrome (TDS) that has infected the American political class and its media has spread across the Atlantic Ocean like plague of biblical proportions.

Along with the usual suspects from the media and the acting fraternity, other prominent people such as the Mayor of London, Sadiq Khan, the Speaker of the House of Commons, John Bercow and the Leader of Her Majesty’s Opposition in Parliament, Jeremy Corbyn, have lost any trace of self-awareness they may have once held along with any sense of perspective.

One of the reasons given for the animosity and hatred directed at President Trump is his supposedly divisive rhetoric. This triggers the over sensitive snowflakes that are churned out daily by the politicized education system and the permanently offended who latch on to any word or sentence they can exploit for political gain.

In line with what has become normal practice by the Left in lieu of sensible discourse, name calling and labelling to denigrate and smear are used in spades against President Trump in order to generate hatred and opposition to his visit.

Among others, the most popular and overused accusations are that he is as racist and a misogynist (yawn). To these golden oldies we can add newer more trendy smears such as white supremacist, white nationalist and xenophobe.

For good measure, it’s worth noting that a non-existent ban on Muslims entering the United States is used to accuse the President of Islamophobia especially by the Muslim Mayor of London Sadiq Khan who I will return to later.

It is worth looking at President Trump’s proposed state visit from the perspective of previous state visits and from the accusations and labels applied to him.

The long-term brutal dictator of Syria, Bashar al-Assad, was given the full royal treatment in 2002 despite enslaving, torturing and killing his own people.

Known by his citizens as Butcher Bob, President Robert Mugabe of Zimbabwe was also given the full royal treatment despite the mass murder of his political enemies during his reign of terror. During his visit Butcher Bob was made an Honorary Knight Grand Cross of the Order of Bath which was later rescinded. 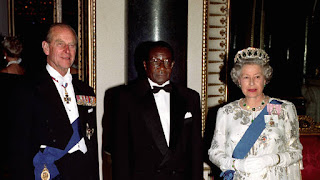 No introduction or explanation is required for the honored guest President Vladimir Putin of Russia.

President Nicolae Ceausescu of Romania was the first Communist leader to be given a state visit. Such was his popularity at home he was put up against a wall and shot along with his wife on Christmas Day 1989.

Other mass murderers and tyrants who have been honored with a state visit include Mobuto Sese Seko of Zaire who embezzled 12 billion pounds from the county's treasury and murdered 230,000 of his own citizens and General Suharto of Indonesia who killed over 1 million people during his invasion of East Timor. (Read about them here)

Besides being outside his remit as Mayor of London, Sadiq Khan wants President Trump banned from Great Britain but he welcomes hate preachers and radical Muslims with open arms. While Mayor Khan is interfering in matters of state, London, which is his remit, is descending with depressing speed into a third world toilet where murder, rape and violent crime are out of control.

It is the prerogative of the Speaker of the House of Commons to invite foreign leaders to address Parliament. The incumbent is a Trump hater and TDS sufferer, John Bercow, who is refusing to invite President Trump for no logical reason other than his personal hatred and animosity toward him.

This courtesy has been extended in the past to tyrants and mass murderers like President Xi Jinpin of China, Khrushchev, Kosygin, Yeltsin and Gorbachov of Russia and Daniel Ortega the communist dictator of Nicaragua. (Read about Bercow's hatred for President Trump here and the politicians hatred for him here)

With reference to the charge of misogyny, the women abusing Emir of Kuwait and King of Saudi Arabia have both been visitors and, without complaint from anyone, the serial woman abuser and rapist President Bill Clinton visited Great Britain on at least three occasions.

Lastly the biggest Trump hater of them all, the communist anti-American, anti-Semitic leader of Her Majesty’s Opposition in Parliament, Jeremy Corbyn, has announced in advance that he will not be attending any functions with President Trump including a state banquet to be held in his honor.

This despicable creature refuses to meet President Trump but unashamedly attended a wreath laying ceremony at the graves of the terrorists who massacred Israeli athletes at the Munich Olympic Games in 1972. 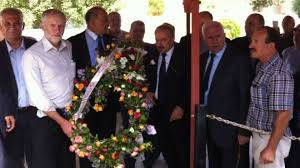 To conclude: looking at the unsavory characters that have visited Great Britain and been feted in the past, one has to wonder why such hate and opprobrium is levelled at President Trump who is a saint by comparison.

The truth is that Donald J Trump, a businessman and patriot, took on the ruling elite along with the establishment and the media and won to become President of the most powerful nation on earth.

He has made no secret of his intention to put America and the American people first, to protect and secure her borders and to fight the globalists and their attempt to impose a centrally controlled, supranational government on the sovereign nations of the world.

Posted by Daniel Thomas at 6:13 PM