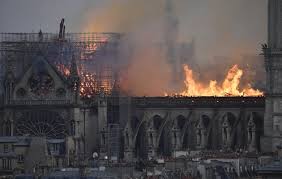 Millions watched the live broadcasts of the iconic Notre Dame Cathedral in Paris going up in flames, but my attention was drawn to moving news tape at the bottom of the screen. As the flames engulfed the roof and the spire it stated that the authorities had categorically ruled out arson.

As the tape progressed across the screen it then stated that the authorities intended to initiate a thorough investigation into the cause of the fire.

Categorically ruling out arson while the fire is still spreading, and before an investigation into its cause, was bound to invite suspicion from the inquisitive.

Due to the censorship routinely employed by the government the world was unaware that Christian places of worship in France had been subjected to a campaign of desecration for some time with twelve churches desecrated in the week preceding the fire.

These included the equally iconic Churches of St Sulpice and St Raphael which were severely damaged and set alight in an arson attack.

We now know that over eight hundred churches have been attacked in France previous to the Notre Dame fire so how the authorities can rule out arson or foul play when the fire is still spreading and before an investigation is completed requires an explanation.

Christianity in France has been under fire from both secularists and Muslims for some time so it would be interesting to know what information the authorities had on these two groups during lead up to the fire.

It’s almost as if the authorities in France don’t want the country or the world to know how and why these churches are being destroyed because the destruction of Christianity in France is seen as a welcome development by the government of the globalist disciple, President Emmanuel Macron.

Even before President Macron came to power the downgrading of Christianity and the subsequent upgrading of Islam was unofficial government policy so it is unlikely anyone will be brought to book if it was discovered that secularists or Muslims started the fire deliberately.

President Macron is a fanatical globalist and Europhile who is determined that France will be fully integrated into a multi-cultural United States of Europe. To that end the traditional France we know today must be destroyed as a separate culture and entity.

As a consequence of this cultural replacement agenda many areas of  Paris, the capital city once known as the City of Love and of Light, resemble the litter strewn slums of Calcutta or the refugee camps of Africa and the Middle East. 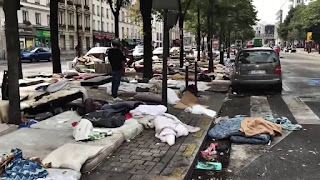 To progress the integration of France into the United States of Europe President Macron recently signed the Treaty of Aachen with the megalomaniac German Chancellor Angela Merkel. This treaty aims to make the two countries a single entity which includes the erasure of national borders and the use of a common language.

President Macron is very young President who has been under the influence of his school teacher/wife throughout his formative years so his knowledge of recent Franco-German history could be suspect.

If he thinks after signing the Treaty of Aachen France and Germany will be equal partners, then his knowledge of recent history is definitely suspect.

Under the influence of his wife and Angela Merkel President Macron is beyond reason and this can be demonstrated by his dictatorial attitude and violent response to the Yellow Vest protests that have engulfed France for months and which show no signs of abating. 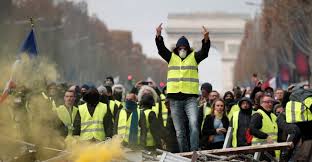 Like Great Britain, France has reached a fork in the road, one way leads to independence, democracy and prosperity, the other to submersion into a centrally controlled, German dominated dictatorship that it will be impossible to free itself from by peaceful or democratic means.

Like the ruined Parthenon in Athens symbolizes the descent of Greek civilization into oblivion so the ruined Cathedral of Notre Dame could do the same for France.

Posted by Daniel Thomas at 7:59 AM