Total Humiliation - Theresa May Grovels to A German Chancellor 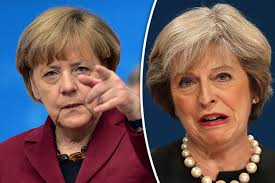 Just when you thought that Prime Mister Theresa May cannot humiliate Great Britain any more in her attempt to override the will of the people and keep them locked inside her beloved European Union, she plumbs new depths.

In her desperate attempt to avoid Great Britain leaving the corrupt and failing United States of Europe she has already begged the President of the European Council, Donald Tusk, to extend the leaving period to get her Withdrawal Agreement through Parliament before the legal leaving date of 29th March, 2019. This was granted and the period extended to April 12th, 2019.

This Withdrawal Agreement is a surrender document which was not negotiated by both parties but created by EU bureaucrats and designed to keep Great Britain locked inside their institutions in perpetuity. It has already been defeated in Parliament three times with little chance of it passing at the fourth time of asking.

In a move reminiscent of a politician that cannot accept the end is nigh she ignored her own party and the British people by inviting the Leader of The Opposition, Jeremy Corbyn, into a coalition to get this surrender document through Parliament with his support.

Jeremy Corbyn is the unapologetic Great Britain hating communist that Mrs. May has been deriding for the last two years as a disaster in the making and unfit to govern. This virulent anti-Semite will demand that Great Britain remains inside the EU institutions but in search of a bigger prize he is likely to withhold his support in the hope of triggering a general election which will propel him into power.

To get her document through Parliament Mrs. May has begged for an extension to the extension which requires the unanimous agreement of the twenty-seven other member states which is not guaranteed.

In a move which demonstrates the humiliation Mrs. May is prepared to heap upon Great Britain she went crawling to the German Chancellor, Angela Merkel, begging for her help to persuade the others to grant her this second extension.

This episode also demonstrates who is really in control of the European Union empire. Nothing happens without the approval of the German Chancellor who, for some reason, puts the fear of God into the other leaders.

(As an example, former British Prime Minister David Cameron was terrified of her and was regularly chastised in public whenever he displeased her or attempted to stand up for the British people)

Labelled with the moniker 'Theresa The Appeaser', she may not see the significance of a British Prime Minister scurrying to Berlin in order to grovel in subservience to a German Chancellor but the British people do and so does the rest of world who look on in disbelief at the demise of a once great and respected country.

If Great Britain doesn’t exit the European Union with this attempt it will pay a heavy price. The Eurocrats led by Mrs. Merkel will exact their revenge and make Great Britain an example to the other member states who may harbour ideas about leaving.

It’s ironic that it’s a British Prime Minister who has retreated into a bunker and a German Chancellor who is closing in on the brink of victory.

Any Prime Minister with a modicum of self-respect would stop groveling to Mrs. Merkel and the cabal of unelected bureaucrats and acknowledge that Great Britain is still a force to be reckoned with in the world. It will prosper and thrive even further once the shackles of the EU bureaucracy have been cast off.

Its not too late for Theresa the Appeaser to restore her tattered reputation by showing confidence in
the British people and leaving the European Union as the law demands on April 12th, 2019 using World Trade Organisation (WTO) rules.