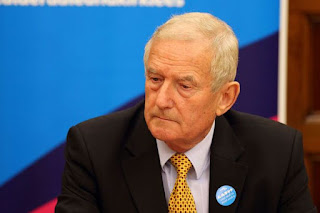 It’s a sobering thought that Prime Ministers Questions from the House of Commons in Westminster has become so popular it has a global audience in the millions. The weekly choreographed farce is used as a platform for the Prime Minister and the Leader of the Opposition to virtue signal and troll for votes in a phony five-minute joust before the circus is opened up for the rest of the swamp dwellers to join in.

For regular swamp watchers like yours truly it’s an opportunity to look for any sign that the inhabitants of the once envied Mother of Parliaments are doing the job they were elected to do or fulfilling the promises they made during their election campaigns.

It’s also an opportunity to look for new talent and leadership potential that might restore the reputation of the thoroughly discredited House of Commons Conmen and with it a return to the democracy of old.

No such luck. The last session was the usual dross where the communist Leader of the Opposition, Jeremy Corbyn, tried to paint a picture of a Great Britain blighted by African levels of poverty and starvation putting the blame on the Prime Minister, Theresa May, and her policy of austerity.

The whole thing is an embarrassing spectacle made worse by a series of questions by talentless nonentities which makes one wonder how they ever got themselves elected.

It's a sad reflection on the electorate that out of a nation of sixty-six million souls this is the best they can come up with to represent them in Parliament.

A case in point was the member for Huddersfield, Barry Sheerman MP. A socialist and veteran swamp dweller who has had his snout in the taxpayer funded trough for forty years.

One would think that after half a century as a lecturer and politician he could at least formulate a question that contained an element of truth instead of a blatant piece of political point scoring propaganda. One also would think that as a public speaker all his life he would be able to ask his question in an articulate manner instead of a bout of ill tempered, foam flecked stuttering.

His question started by with a preamble stating that when he was first elected forty years ago, he was a Eurosceptic who disagreed with Great Britain’s membership of the European Union.

He continued by saying he has changed his mind and is now a firm disciple of the EU because over those forty years it has ‘delivered prosperity, cleaned up the environment, kept the peace, kept our security’ etc.

His question was: "isn’t it time the Prime Minister spoke the truth about Europe not the big lies of the Ukip party"? To bring the old duffer up to date its not the Ukip 'party' that's taking the country by storm its the Brexit Party, but I digress.

His assertion is utter nonsense since this old charlatan wouldn’t recognize the truth if it punched him on the nose.  Far from bringing prosperity the European Union has caused bankruptcy to the Eurozone countries resulting in mass unemployment, abject poverty and misery. This is especially acute for young people who are migrating en masse from their homelands in search of a future elsewhere.

The cleanup of the detritus left over from the industrial revolution and the war was started long before environmentalism became a fad in the EU although they falsely claim responsibility for it along with the kudos.

In a reversal of the truth the EU open border mass immigration policy has left entire populations less secure than a decade ago as criminal gangs and incompatible cultures wreak havoc among the host countries.

The biggest lie of all is one that is shamelessly used by disciples of the EU to help bolster the case for their rapidly failing project. It is NATO that has kept the peace in Europe since the war, not the EU as Barry Sheerman claims.

The facts are simple, when he jumped on the gravy train forty years ago the Labour Party was largely Eurosceptic with the big hitters on left all railing against the undemocratic EU tyranny in the making.

In the intervening years the party has moved to the far left and started to embrace the ever more totalitarian EU. His principles are obviously malleable depending on the prevailing wind in his party.

Seventy-eight-year old Barry Sheerman entered the swamp aged thirty-eight after a stint as a University lecturer. Typical of socialists in the Labour Party he is an expert on the redistribution of wealth with no experience whatsoever of creating it in the first place. As a matter of fact, he despises and smears the wealth creators and considers them to be the enemies of the people.

In forty years, he doesn’t appear to have achieved anything of note other than spout the party line, lies and all, and slavishly voting as he’s told to by the party whips.

For that he has trousered a fat salary topped up with a shed load of expenses and when he finally retires from the House of Conmen, he will pocket a gold plated, copper bottomed taxpayer funded pension.

Nice work if you can get it.

Posted by Daniel Thomas at 6:11 AM